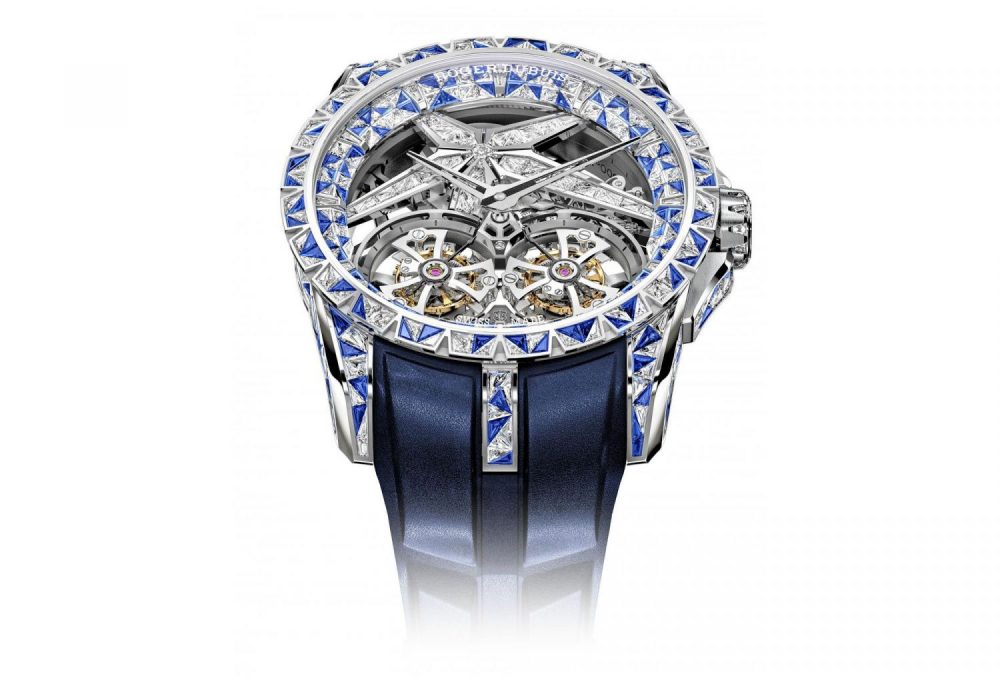 In the grand tradition of memento mori pocket watches, and as a reminder that this time on earth is short and must be filled with the unfettered pleasure, madness and freedom, the movement of the Excalibur Superbia is secretly inscribed with the words Memento mori, a detail that will henceforth feature on each Hyperwatch created by the Maison. Because to remember you must die is to remember you must live – and is unquestionably the most exciting way to experience hyper horology. 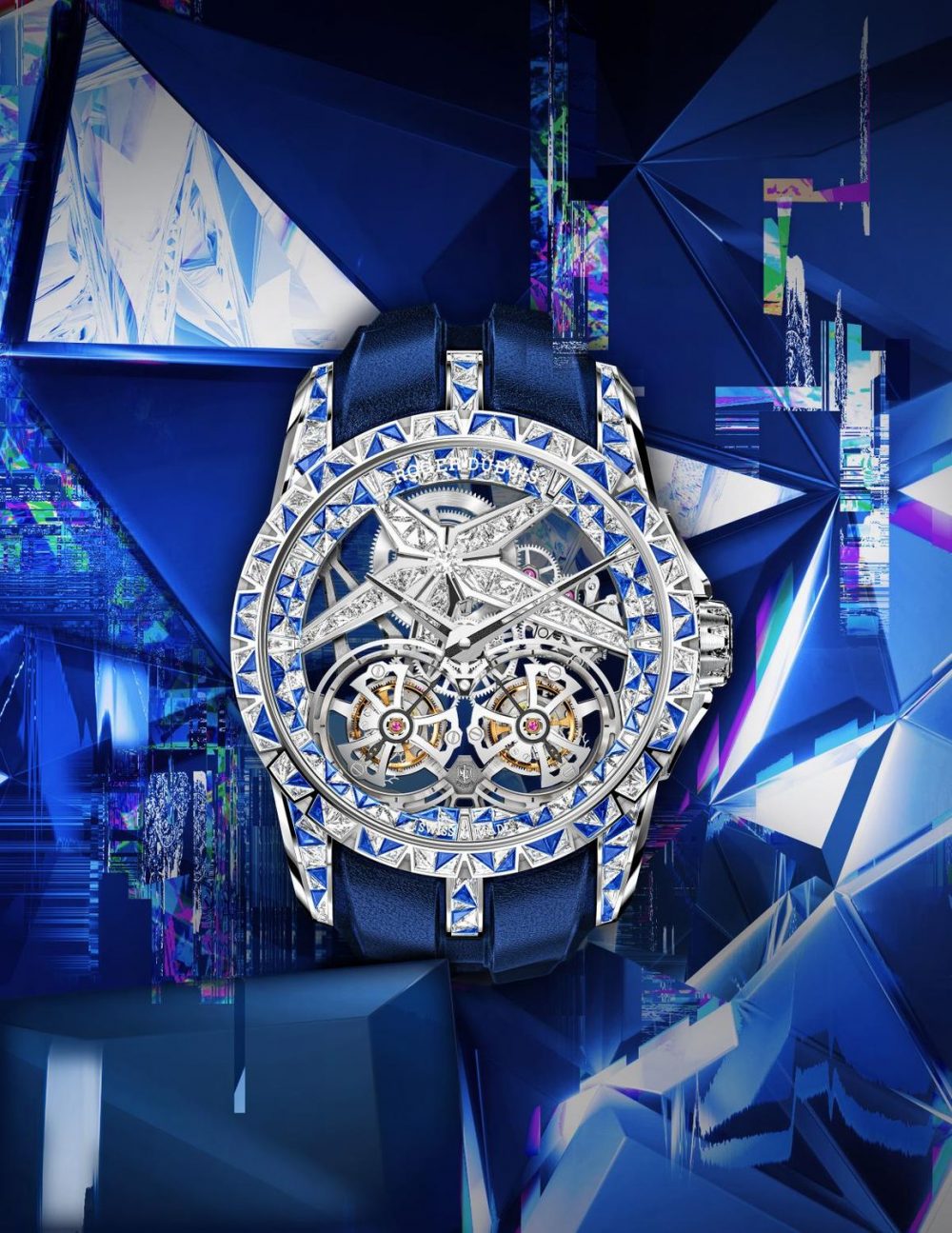 Pride, along with excess, are part of Roger Dubuis’ mindset, a duality that allows unfettered exploring of new territories and the ability to demonstrate the other side of its “personality”: dramatic singularity. Indeed, powered by an obsessive quest for pleasure, freedom, and hedonism, all these characteristics are inherent to its very DNA.

The result is a proud lineage of over the top and utterly contemporary timepieces in which the brand that dares to be different puts technique at the service of aesthetics. In its latest demonstration of all the above, Excalibur Superbia is a stunning contemporary epitome of extravagance guaranteed to send the senses of the most hardened hyper watch aficionado into overdrive. 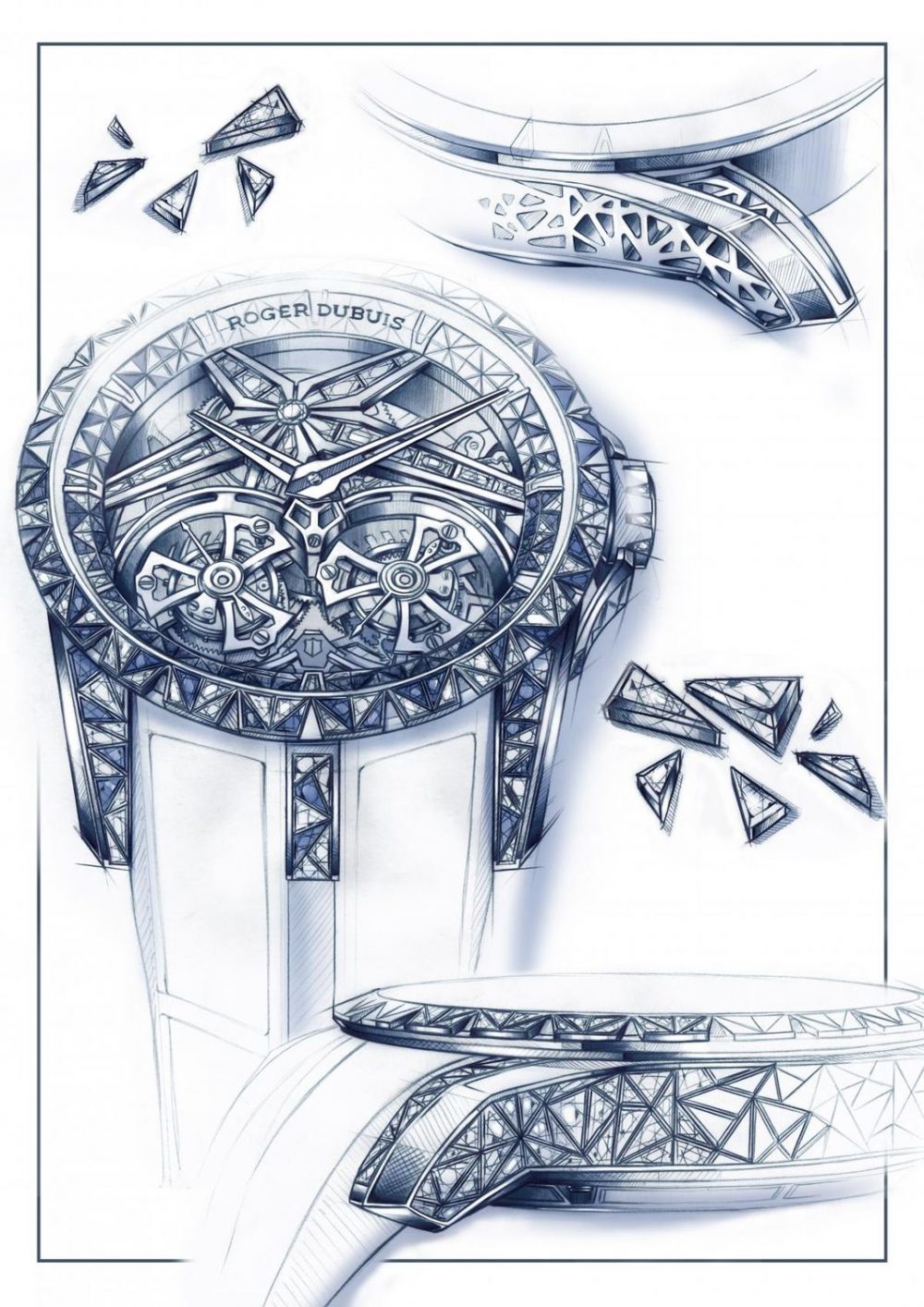 Roger Dubuis is thus unashamedly guilty of that most serious of the seven deadly sins: Pride, known in Latin as Superbia.  Strongly linked to vanity and risk-taking, Superbia is also regarded as having an obsessive addiction to adrenaline, just like, in fact, Roger Dubuis itself. Driven by this, along with its firm belief in living larger than life, Roger Dubuis has created Excalibur Superbia, the ultimate totem for a tribe of people who trust that life is but a game that is for making the most of. 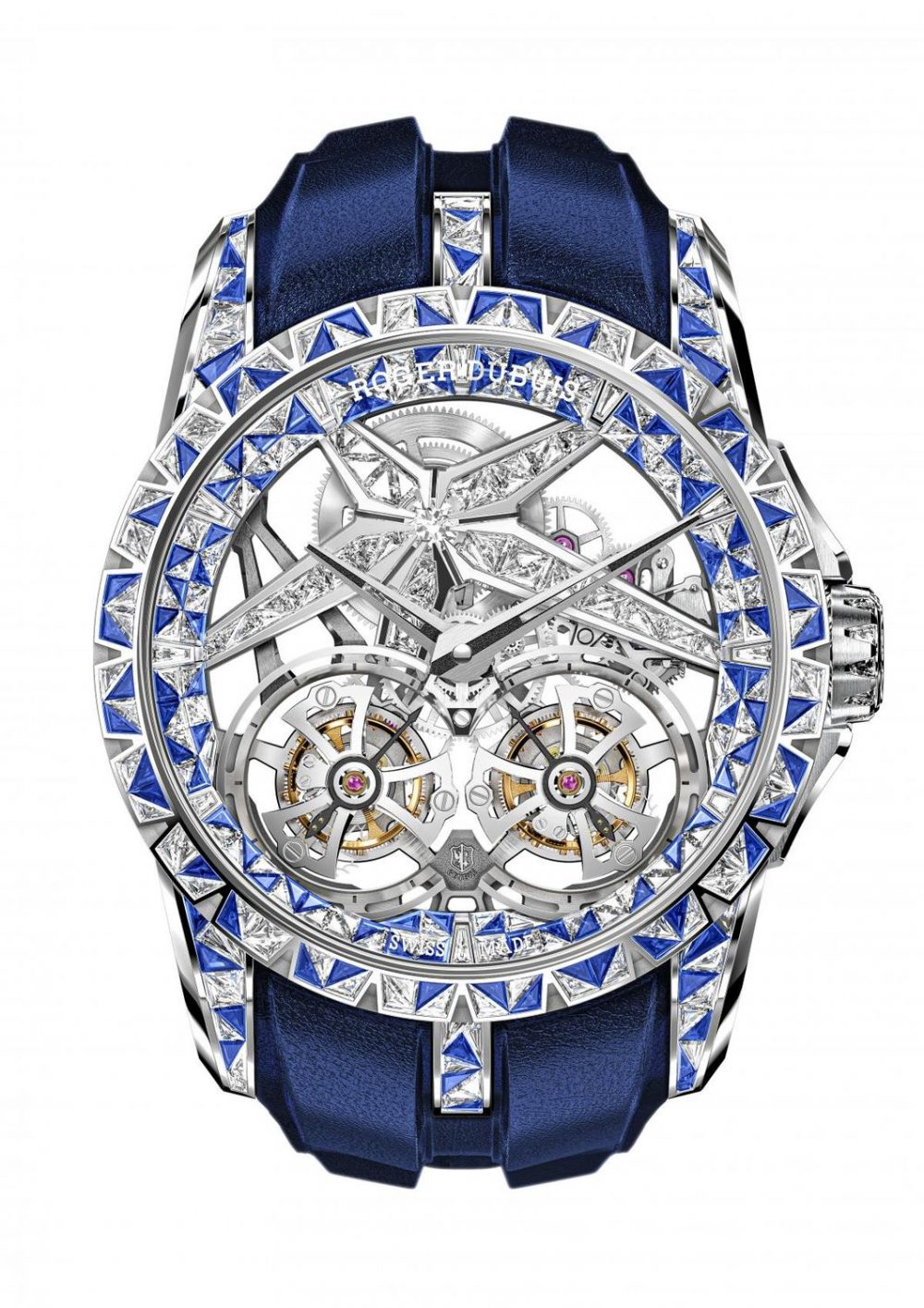 The ultimate example of the Maison’s unshakable pride and excess, Excalibur Superbia is crafted in palladium-enriched white gold and set with exactly 600 precious white diamonds and blue sapphires. This offers a truly extravagant (and ideal) housing for Roger Dubuis iconic signature calibre: a brand-new double flying tourbillon movement, the RD108SQ, inspired by its legendary version launched in 2005, the first double-regulator calibre connected with a differential, built up in volume and adorned with a diamond-set star.

For the RD108SQ, paying tribute to Roger Dubuis’ status as a forerunner in the field of this extreme complication mastered by few other watchmakers, in the RD108SQ, the double flying tourbillon is transformed into the ultimate iconic signature. 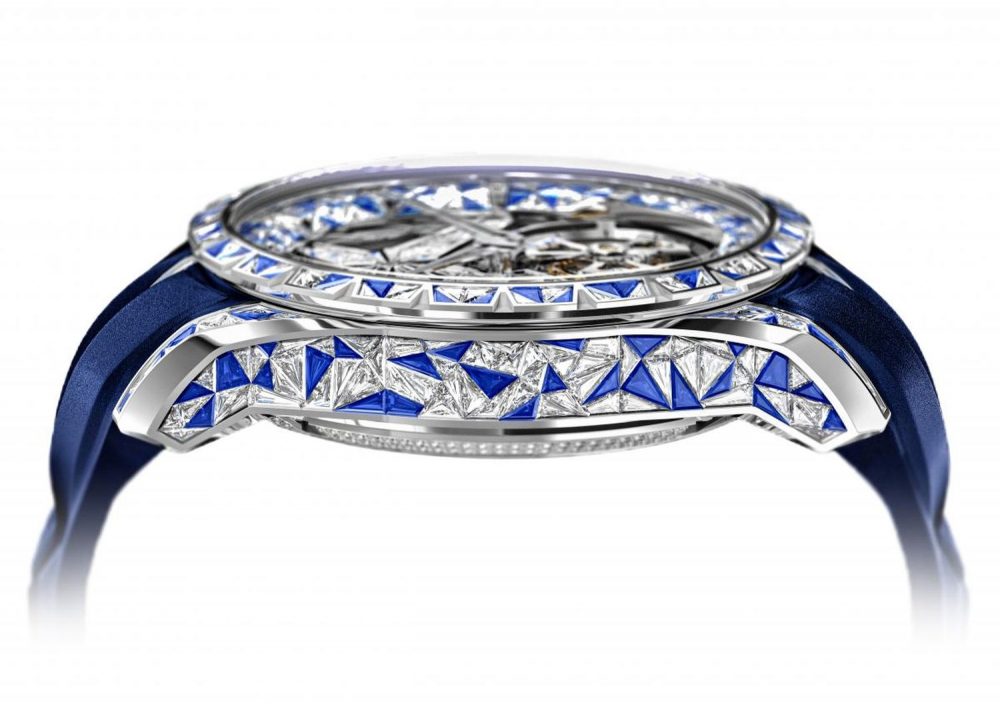 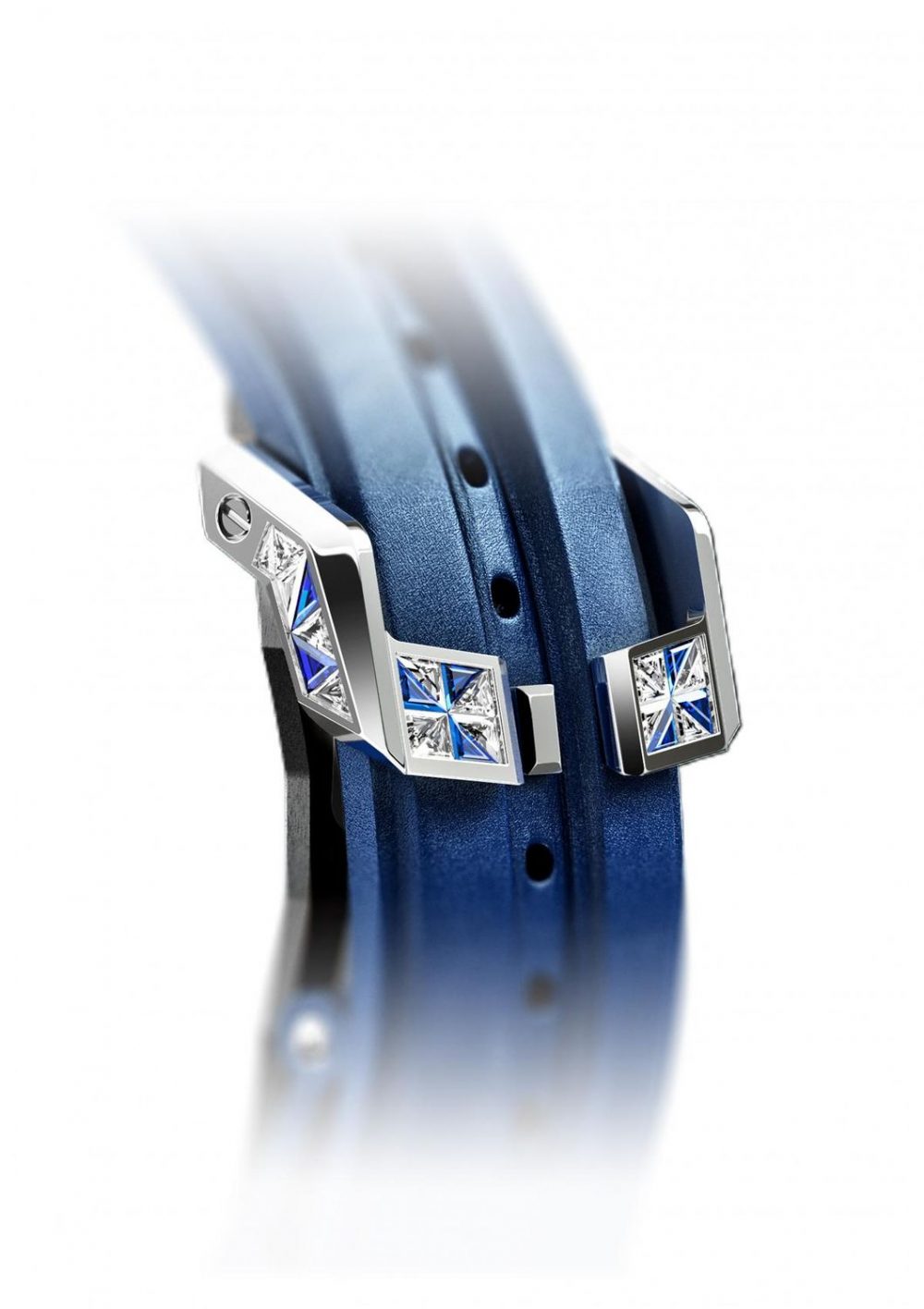 Aptly demonstrated by multiple tricks embodied in this latest iteration of off-the-radar hyper horology, the devil, as Roger Dubuis knows all too well, is in the details. In the Excalibur Superbia, Roger Dubuis once again reinvents the game like no one ever has before.

Sending it firmly into the hallowed halls of World Premieres, the excessiveness of the Excalibur Superbia comes neither from its alloy nor its number of stones. What makes it truly bold is that every stone set on the flange, the bezel, the case and the crown is tetrahedron shaped and assembled with an invisible setting on curved surfaces. The hardest way to set a stone, an invisible setting becomes nearly impossible when required on a curved surface.

In this masterpiece in which the complexity of the pattern surpasses any norm known to mankind, master craftsmen at the Maison’s Geneva Manufacture have thus set about creating a backbone structure to encapsulate each stone from the back, complying with the brand’s total determination to avoid any material between the stones themselves.

Royist is a leading boutique concierge offering luxury lifestyle management services to select members worldwide. Enjoy an unrivalled global 365/24/7 service.
View Editorial's profile
Brands Collection — Explore a curated selection of the finest horology brands
View the collection
Featured Timepieces
Horology
Introducing the Bugatti Chiron Tourbillon Baguette Black and Orange Sapphires
It all started with an idea conceived by Jacob & Co. together with Bugatti - how to reproduce the visceral sensation of the iconic Bugatti 16-cylinder engine in a timepiece.
Horology
Piaget’s Limelight Gala is a celebration of extraordinary women
In a tribute to the Limelight Gala and its illustrious history, Piaget is presenting six new limited editions for Watches & Wonders 2021.
Horology
Introducing Esperanza, the first treasure in Chopard’s Red Carpet Collection
Surrounded by countless legends, emerald has inspired Chopard’s Haute Joaillerie workshops to create a new jewellery watch, crafted in ethical 18-carat white gold and entirely set from dial to bracelet with emeralds and diamonds.
Horology
Introducing Hublot’s Big Bang Integral Tourbillon Full Sapphire
A new integral bracelet and case custom-made from sapphire: this feat affirms yet again the technical proficiency and the exceptional expertise that Hublot has acquired in the working of sapphire.
Horology
Bovet Récital 26 Brainstorm Chapter Two is now available in 18k Red Gold
The timepiece features Bovet’s patented double-sided flying tourbillon, a second-time zone with a twenty-four city disc, a precision moon phase showing both hemispheres, and offers a full 5 days of power reserve.
Horology
Louis Vuitton introduces the Tambour Carpe Diem
By combining exclusive high watchmaking caliber with a subversive Vanitas, Louis Vuitton orchestrates a scintillating show with the Tambour Carpe Diem.
Horology
The four chapters of Jaeger-LeCoultre Reverso Hybris Mechanica Calibre 185
Jaeger-LeCoultre celebrates an icon, the Reverso, by releasing the most complicated timepiece ever presented in this emblematic collection.
Horology
Richard Mille introduces the Rm 21-01 Tourbillon Aerodyne
With the RM 21-01, Richard Mille presents a new case design. The complex structure of the case in 5N red gold is reinforced with an exoskeleton in Carbon TPT, used for the bezel and pillars.
Horology
Unveiling Audemars Piguet’s limited “Black Panther” edition
Audemars Piguet reveals the first iteration of its Marvel heroes watch series: the Royal Oak Concept “Black Panther” Flying Tourbillon, limited to 250 pieces.
Horology
Introducing the Patek Philippe Ref. 7118/1450R-001 Nautilus Haute Joaillerie
To celebrate the opening of Watches and Wonders Geneva 2021, Patek Philippe is providing a place of honor for its legendary Nautilus collection.
Horology
Christophe Claret presents the X-TREM-1 Calavera
This emblematic celebration of Mexican culture inspired Christophe Claret for this new version.
Horology
Beauty from above and beyond — The De Bethune DB28XP Meteorite
The iconic "DB28XP" now appears with a black zirconium case and a meteorite dial featuring distinctive geometric shapes.
Timepiece Extravaganza
Discover our membership —  ™Request Invitation
We use cookies and similar technologies to give you the most relevant experience by remembering your preferences and repeat visits. By clicking “Accept”, you consent to the use of all cookies.
Cookie settingsACCEPT
Manage consent