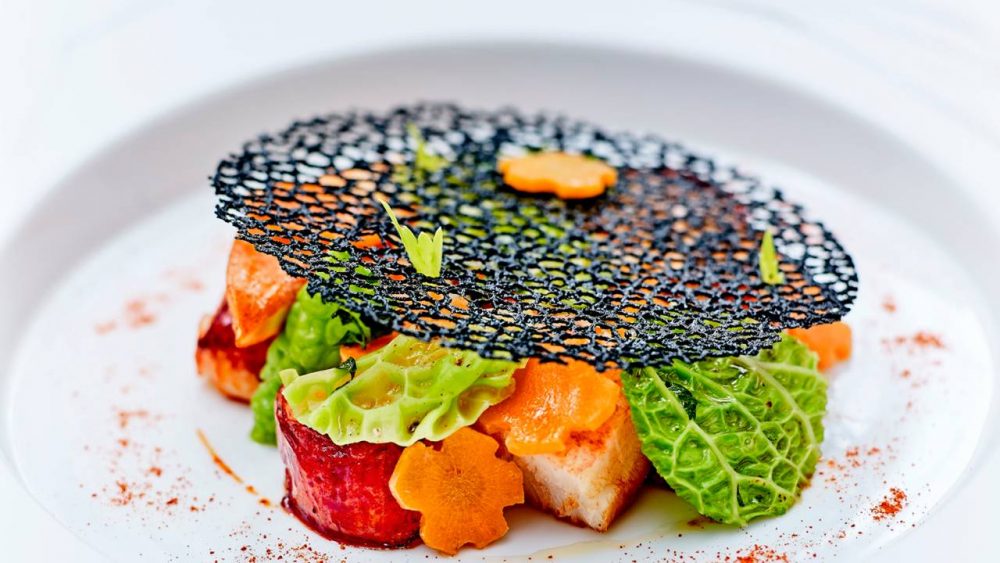 Le Cinq is spacious and bright, decorated in shades of gold and grey, and it rightfully gives its guests the sentiment of dining in a private chateau. Boasting traditional French and English furniture, guests can admire two beautiful Louis XIVth wardrobes as well as two Louis XVIth gold gilt chairs. Large Regency Style wood-scuplted mirrors with gold leafing give a depth to this space by reflecting the view of the Marble Courtyard on the opposite side.

Two very large Regency Style pier tables separate the main room from the guest table that seats between eight to ten. From this room, bathed in sunlight as well as rich but soft tones emerges a warm and intimate atmosphere. Christian Squer defines his cuisine as being “flavors, concentrated and moving.” Among the signature dishes of the chef that may be mentioned: the turbot with truffled fingerling potato emulsion, large crispy prawns from Bretagne and  citrus emulsion or whipped oysters. 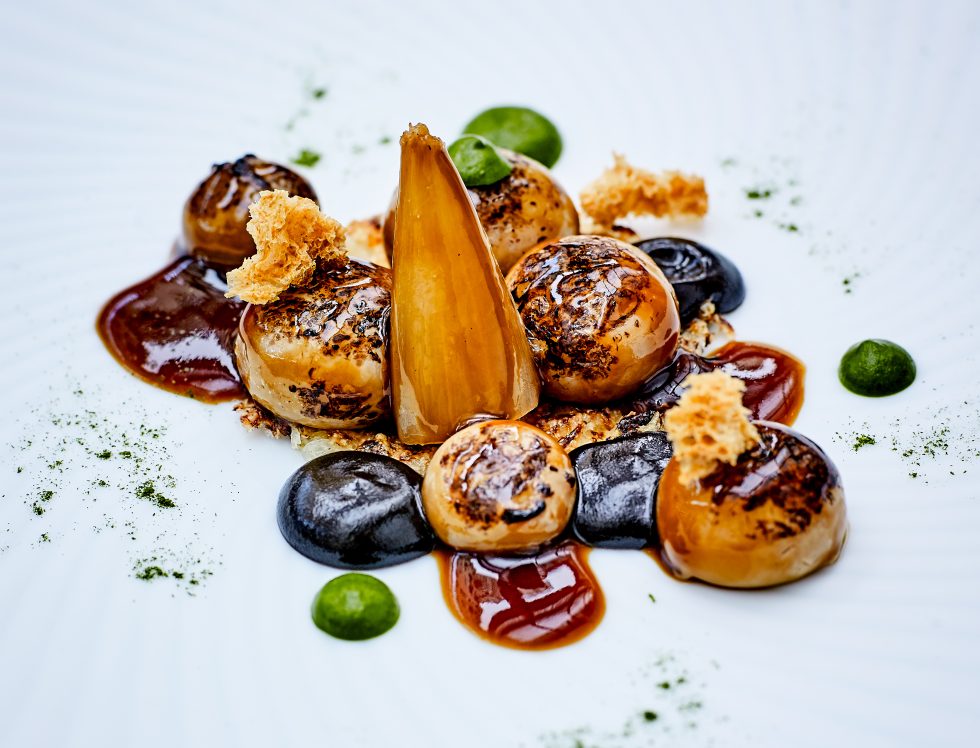 The Four Seasons Hotel George V wine cellar is one of the hotel’s greatest treasures. Its history bears witness to years gone by and even takes us back to World War II. It was designed in 1928 at the same time as the Hotel was being built, in a former quarry 14 metres below ground in rocks that had formerly been used to build the Arc de Triomphe.

During the Second World War, it was walled up to prevent enemies from accessing it. When the hotel closed its doors for two years of renovation work in 1997, there was almost nothing left of its vintage wines. 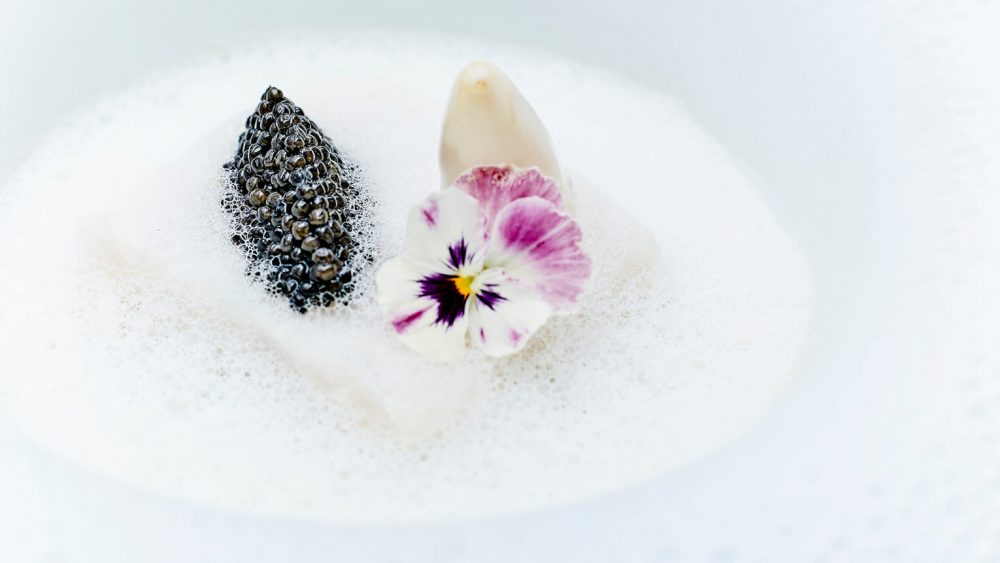 The Hotel called in a famous sommelier, Eric Beaumard, who was the 1998 Vice-President of the World in Wine Stewardship. Passionate about his job, Eric made several trips to different vineyards in order to meet local wine producers. His vast knowledge of this job, as well as the friendships that he developed with the grape growers over the years while preparing for the Wine Stewardship contest in 1998, helped him discover the bests wines.

Some of the grape growers actually choose to bring their personal bottles from their wine cellars so that their old friend can present them in this mythical hotel. For nearly a year, going from wine cellar to wine cellar, Eric progressively replenishes the hotel’s wine cellar so that he can continue to offer many different and rare vintages to his clients.

Royist is a leading boutique concierge offering luxury lifestyle management services to select members worldwide. Enjoy an unrivalled global 365/24/7 service.
View Editorial's profile
Brands Collection — Explore a curated selection of the finest wine producers
View the collection
Featured Stories
Culinary
Victor’s, unique culinary creations by Christian Bau in Perl, Germany
A dedicated team. An exclusive ambience. Unique culinary creations. These are the hallmarks of Victor's Fine Dining by Christian Bau, who was awarded numerous times for his creations.
Culinary Z Featured
La Vague d’Or at Cheval Blanc St-Tropez, a magical journey between land and sea
La Vague d’Or invites guests on a magical journey between land and sea. Chef Arnaud Donckele draws his inspiration from the very heart of Provence, its land and its traditions.
Culinary Z Featured
Aqua, a transformative dining experience at Ritz-Carlton Wolfsburg, Germany
The restaurant's interior draws inspiration from the theme of nature, and the shimmering serenity of water; it opens up into a private garden, with a tranquil, Zen-like atmosphere.
Culinary Z Featured
Ciel Bleu Amsterdam, international cuisine at its finest
At Ciel Bleu you are presented with an unsurpassable panoramic view of the Amsterdam skyline on the 23rd floor of Hotel Okura.
Culinary Z Featured
Cheval Blanc by Peter Knogl, exquisite French cuisine in Basel
Chef de Cuisine Peter Knogl awaits you in the Cheval Blanc with a symphony of aromas, colours and harmonious tastes.
Culinary Z Featured
Le Grand Véfour Paris, a sublimed cooking experience by Guy Martin
Jewel of the 18th century "art décoratif" Le Grand Véfour has been the finest gourmet rendez-vous of the Parisian political, artistic and literary society for more than 200 hundred years.
Culinary Z Featured
Georges Blanc, Vonnas, France, a tradition that is almost 150 years old
Enter a world of great flavours and food products, a cuisine of great personality that reflects the Chef’s character and sensibility.
Culinary Z Featured
Flocons de Sel, a delightful culinary experience in the heart of authentic Haute-Savoie, Megève
"Through my cooking, I try to convey a message beyond the emotions." — Emmanuel Renaut
Culinary Z Featured
Dal Pescatore, Runate, Italy, a truly memorable and harmonious dining experience
What is known today as the restaurant, “Dal Pescatore,” dates back to the 1920s when it was first opened by Antonio Santini and Teresa Mazzi.
Culinary Z Featured
The Greenhouse restaurant, Mayfair: a verdant oasis of culinary wonder
Renowned for its French infusions, organic reverence and gastronomical ingenuity: The Greenhouse is a widely respected classic which is up to the mark in modern flavours and innovative techniques.
by Ellie Loxton
Culinary
Wildflower, Adrian Martin’s new sustainable fine dining experience
Set to open later this year, Wildflower is a contemporary Camden-based restaurant which brings sustainability together with fine dining sophistication.
by Ellie Loxton
Culinary Z Featured
Muse by Tom Aikens, a fine dining experience of autobiographical beauty
Set within a building of magic and miscellany, Tom Aikens crafts dishes evocative of the past and sparkling in the present.
by Ellie Loxton
Discover our membership —  ™Request Invitation
We use cookies and similar technologies to give you the most relevant experience by remembering your preferences and repeat visits. By clicking “Accept”, you consent to the use of all cookies.
Cookie settingsACCEPT
Manage consent