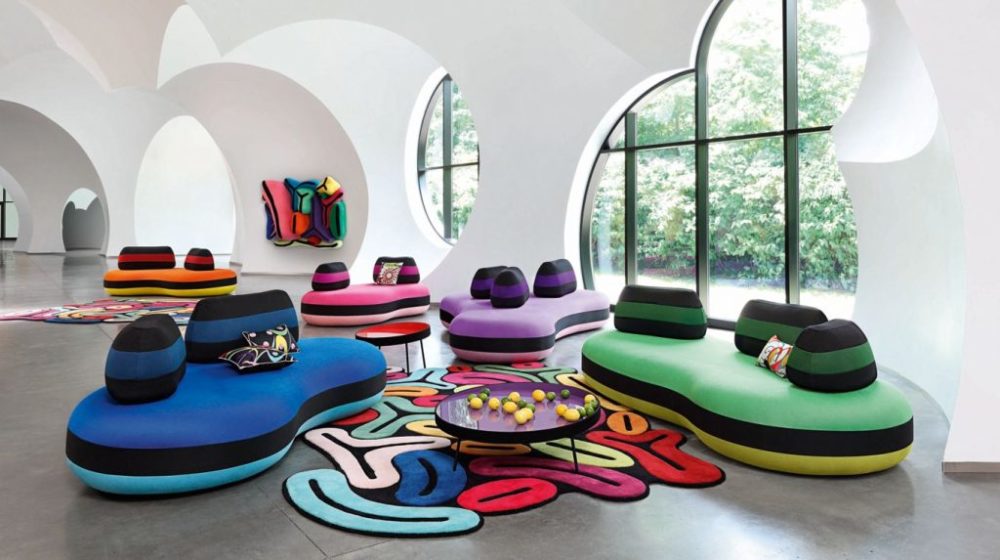 Joana Vasconcelos lives and works in Lisbon. She has been exhibiting regularly since the mid-1990s. Her work became known internationally after her participation in the 51st Venice Biennale in 2005, with the work A Noiva [The Bride] (2001-05). Her creations question women’s place in the contemporary world by honoring Portugal’s artisanal traditions and know-how.

She is the first woman and the youngest artist to exhibit at the Palace of Versailles, in 2012. Highlights of her career include a solo exhibition at Guggenheim Museum Bilbao, the project Trafaria Praia, for the Pavilion of Portugal at the 55th Venice Biennale; the participation in the group exhibition The World Belongs to You at the Palazzo Grassi/François Pinault Foundation, Venice (2011); and her first retrospective, held at the Museu Coleção Berardo, Lisbon (2010).

Since artists have a visionary and precious vision of the world, Roche Bobois has frequently collaborated with the art world: in 2015, the In-Extérieur exhibition was devoted to Street Art actors and the evolution of their practices in workshops. Since 2017, Fotofever has given Roche Bobois the opportunity to place some of its designs in a dialog with contemporary photography.

In 2019, while visiting the Roche Bobois Lisbon showroom in search of a lamp, Joana Vasconcelos discovered the Mah Jong sofa, designed by Hans Hopfer in 1971. She was born that same year, which she interpreted as a sign: a collaboration began to form.

A few months later, the brand entrusted the artist with six of their designs and gave her carte blanche to reinterpret each piece: two Ava chairs, the Lady B and Nuage armchairs, the Sismic and Cute Cut tables as well as the iconic Mah Jong.

When we approached Joana Vasconcelos to collaborate with Roche Bobois, we had two wishes in mind. Our first intention was to give voice to a contemporary artist who is touching yet surprising, and to offer her to work with an unsual medium of expression: the functional object. But above all, our goal was to offer our clients the chance to bring home a piece of a dream: a creative, flamboyant and delightful collection, an optimistic and quirky version of our French Art de Vivre, as transcended by the eye of Joana Vasconcelos. — Nicolas Roche

In celebration of Roche Bobois’ sixtieth anniversary, Roche Bobois has decided to continue the dialogue with Joana Vasconcelos by asking her to design a line of seating and decorative accessories as the flagship collection of the year. 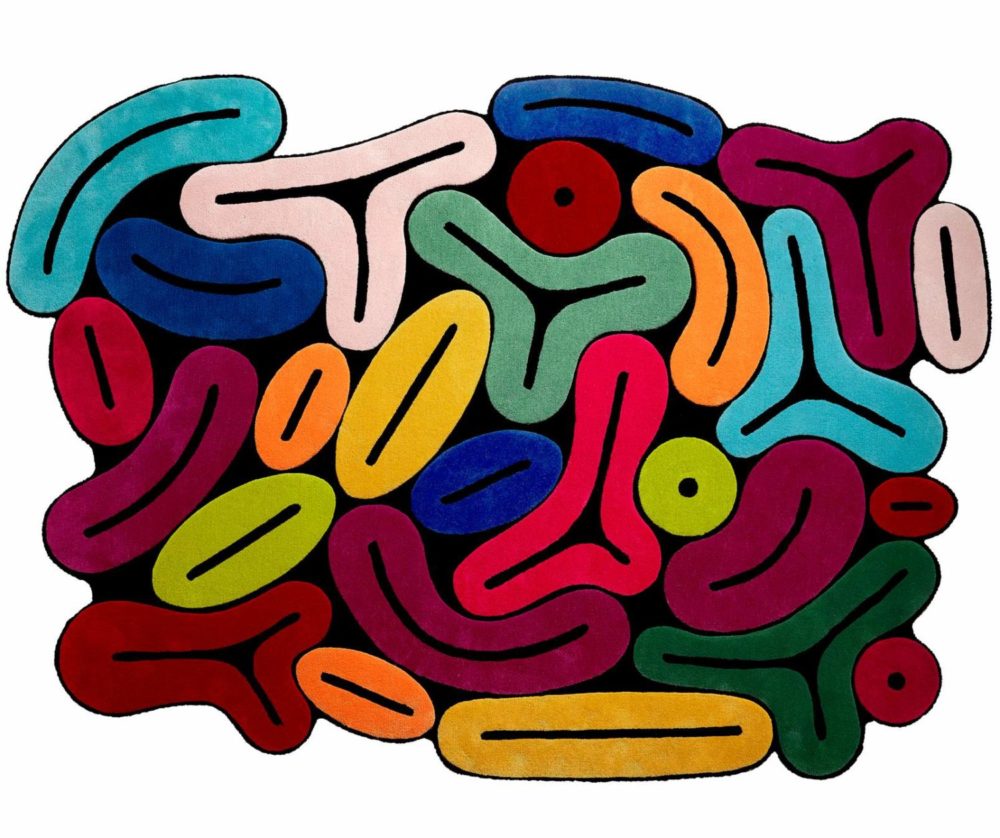 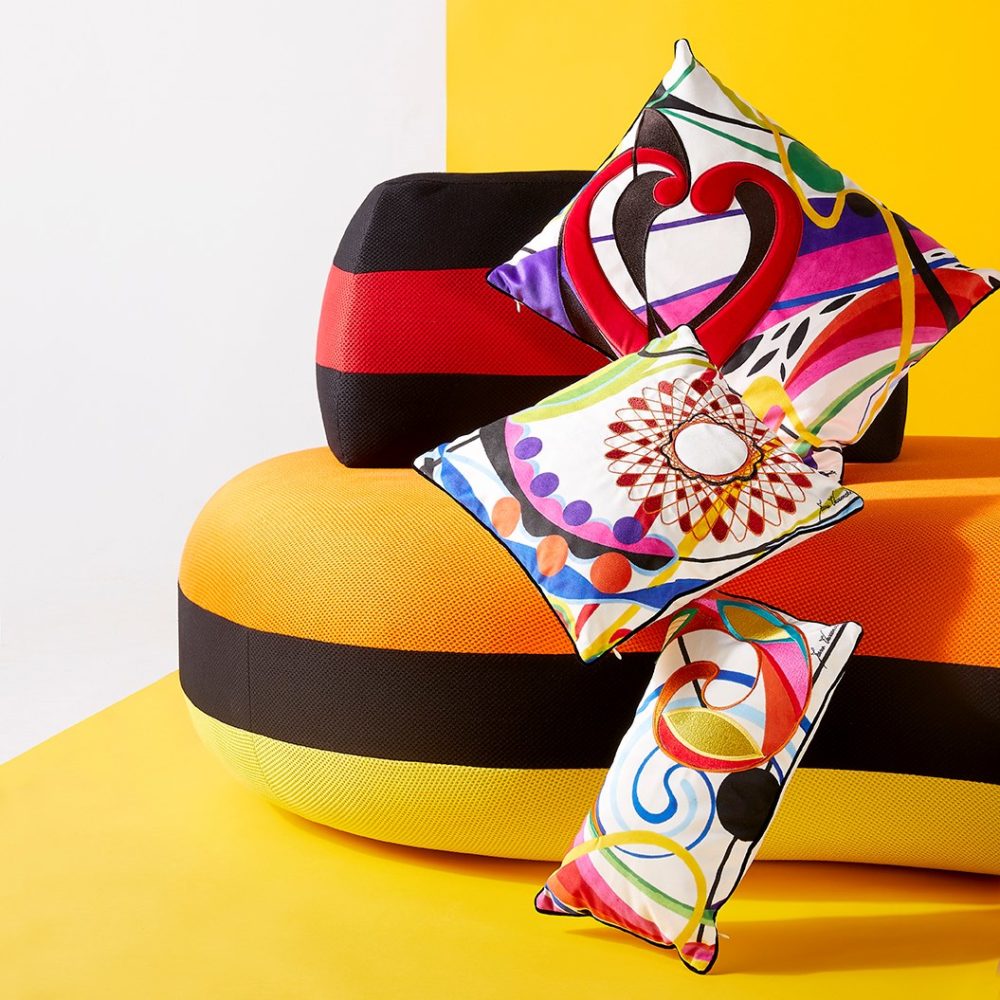 Maintaining the point of view of an artist rather than a designer, she took on the challenge of designing pieces intended to interact with a wider audience. By transposing her themes and questioning to everyday objects, she offers her vision of the world adapted to the organisation of living spaces.

The end result is a series of multifunctional pieces that are playful, alluring and optimistic.

When I look at these pieces with their curves and winding lines, I see a series of shapes meant for interiors. I wanted to call on the customers’ creativity, I wanted them to feel free to compose with the modules and the choice of colours. I designed these pieces with the hope that people would make them theirs, play with them, while preserving the importance of comfort, and a sense of flavour and joie de vivre. — Joana Vasconcelos

Royist is a leading boutique concierge offering luxury lifestyle management services to select members worldwide. Enjoy an unrivalled global 365/24/7 service.
View Editorial's profile
Our lifestyle team suggests extraordinary gift ideas and provides bespoke research, acquisition and delivery of rare and hard-to-find items through our vetted international network of suppliers and partners. For more information, please request an invitation.
Style BrandsDiscover fashion houses, established jewelers and independent designers across the globeView BrandsWe offer an international fashion concierge service, including bespoke shopping experiences, luxury gift sourcing, fashion show access and personal styling services
Featured Stories
Home
Cervélo x Automobili Lamborghini ultra-limited edition R5 road bike
Dressed in an all-Italian suite of components, this R5 goes beyond the tricolore in showing its devotion to Italian luxury.
Home Z Featured
Discover Maison Goyard’s timeless Art of Living and Travelling
Bespoke luggage and trunk-maker, Maison Goyard offers products of the finest quality and craftsmanship, born from tradition, elegance and excellence.
by Georgie Campbell
Home
Giorgio Collection: the luxury experience of furnishings Made in Italy
The perfect match of finest materials, attention to details and Italian craftsmanship. Art Deco vibes mingle with cutting-edge shapes.
Home
Based Upon is a London studio whose commissioned works move into the realm of the priceless
Over 16 years’ since its inception in 2004 Based Upon has gained a reputation as a professional, highly-sought-after artist with an intuitive eye for depth, beauty and meaning.
Home
Colin Burn’s Limited Edition Pearl Royale Chess Set radiates pure opulence
Crafted in solid 18k white gold and pave’ set with over 510 carats of fine diamonds, the Pearl Royale stands as the world’s most luxurious chess set ever created.
Home
Minotti 2020 Collection, a new ideal of contemporary living by Rodolfo Dordoni
The new 2020 Collection – coordinated by Rodolfo Dordoni with Minotti Studio – outlines a new ideal of contemporary living: a project with a strong international vocation, though entirely Italian in its imprint.
Home
A unique gift proposition, Dolce&Gabbana x Fiasconaro limited edition sweet treats
The collaboration between the creativity of Dolce&Gabbana and the confectionery artistry of Fiasconaro results in a unique recipe: the typical Milanese panettone, revisited with the flavours of Sicily.
Home
Between tradition and modernity: the Rosenthal Heritage Collection
Past and present linked in style: With the "Midas" décor designer Gianni Cinti reinterprets the classic Rosenthal shape Sanssouci.
Home
Lalique’s Hirondelles Perfume Bottle Is Re-issued For a Collector’s Edition
2020 marks the 100th anniversary of René Lalique’s Villa, in Wingen-sur-Moder, France.
Home
The champagne chest by Rolls-royce Motor Cars is an epicurean delight
Discover the meticulously crafted House of Rolls-Royce Champagne Chest, part of the Rolls-Royce accessory portfolio.
Home
Travel-inspired furniture with the Louis Vuitton’s Objets Nomades collection
Louis Vuitton’s Objets Nomades is a collection of travel-inspired furniture and objects made in collaboration with internationally renowned designers.
Home
Delfin Wellness CocoOne, first-class cocooning lounge—a fantastic invitation to get some rest
The world is spinning faster and faster. Places to decelerate are more desirable than ever. CocoOne is such a place.
Discover our membership —  ™Request Invitation
We use cookies and similar technologies to give you the most relevant experience by remembering your preferences and repeat visits. By clicking “Accept”, you consent to the use of all cookies.
Cookie settingsACCEPT
Manage consent