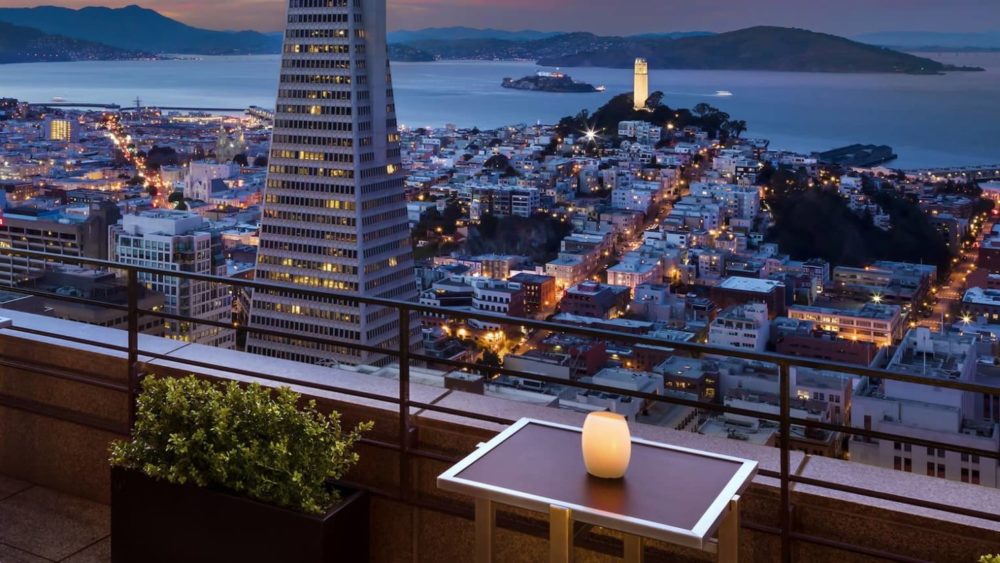 With a bold new look coupled with Four Seasons legendary service, Four Seasons Hotel San Francisco at Embarcadero is now open. Located near the Embarcadero area at Sansome and California Streets in the Financial District, guests are just steps – or a cable car ride – from major international businesses, award-winning restaurants, luxury shopping in Union Square, walkable neighbourhoods such as North Beach and Chinatown, and the Embarcadero waterfront, including the twice-weekly farmers market in the Ferry Building.

Just 20 minutes from San Francisco International Airport, the new Hotel is also a few blocks from the city’s original Four Seasons on Market Street in the SoMa district, known for its world-class museums. 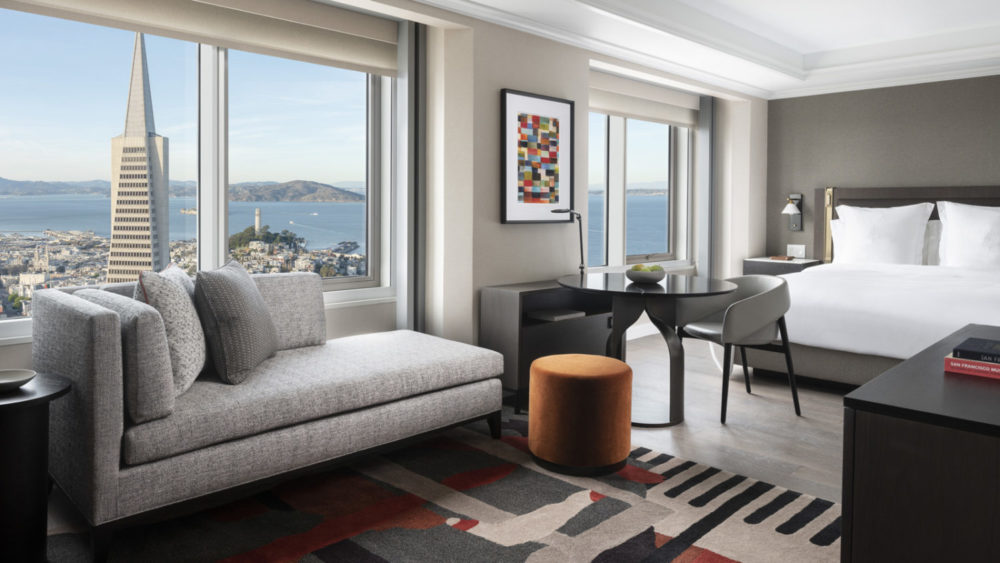 “As our California collection continues to grow, we are proud to expand our presence in one of America’s top destinations, giving locals and travellers alike another unique opportunity to stay with Four Seasons in this great city,” says Christian Clerc, President, Global Operations, Four Seasons Hotels and Resorts. “With soaring views, fully reimagined guest rooms and suites, and an ideal location near some of the city’s most popular attractions, we look forward to welcoming guests to our new luxury experience in San Francisco.”

A Home (or Office, or Classroom) in the Sky

The Hotel’s 155 rooms and suites – all located on the top 11 floors of the 48-storey 345 California Center building – have been designed with flexibility in mind, for today’s travellers as well as local guests.

“Whether enjoying a much-needed staycation, looking for a change in scenery from your work from home set-up, or returning to us for a visit, guests will find fresh new spaces that meet their needs,” says Megargle. 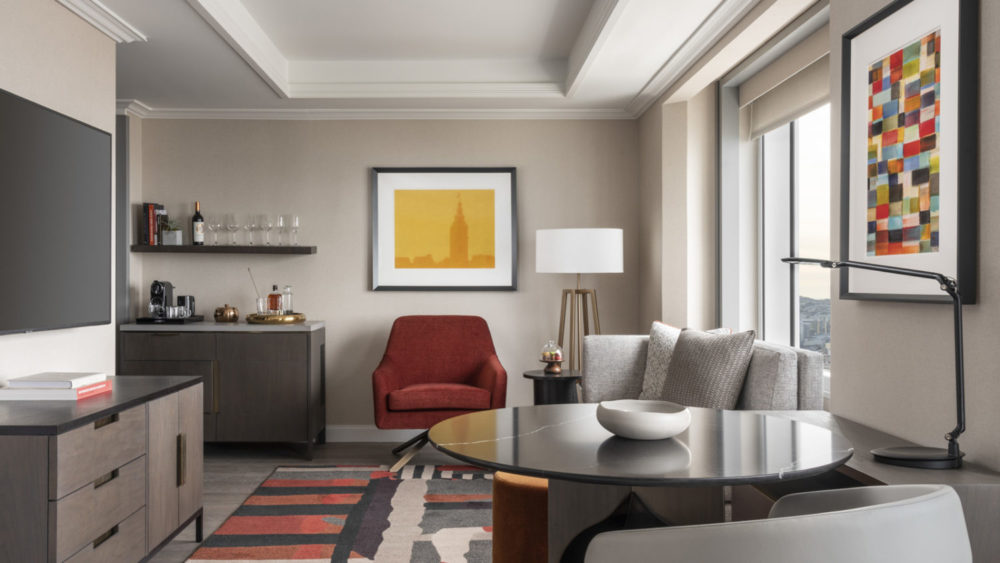 Guests will experience the height of modern luxury in updated, beautifully appointed rooms and suites by design firm Marzipan, who were inspired by the incredible views across the city and beyond. The palette is bright and crisp, with splashes of colour punctuating bespoke furnishings and carefully chosen textures such as the custom-designed, hand-tufted wool rugs.

Thoughtful details are everywhere, such as the threads of gold woven through the wall-coverings that harken back to the city’s gold rush history.  Other features include spa-like bathrooms featuring freestanding soaking tubs placed to enjoy the sunshine during the day, and the glittering urban landscape by night. 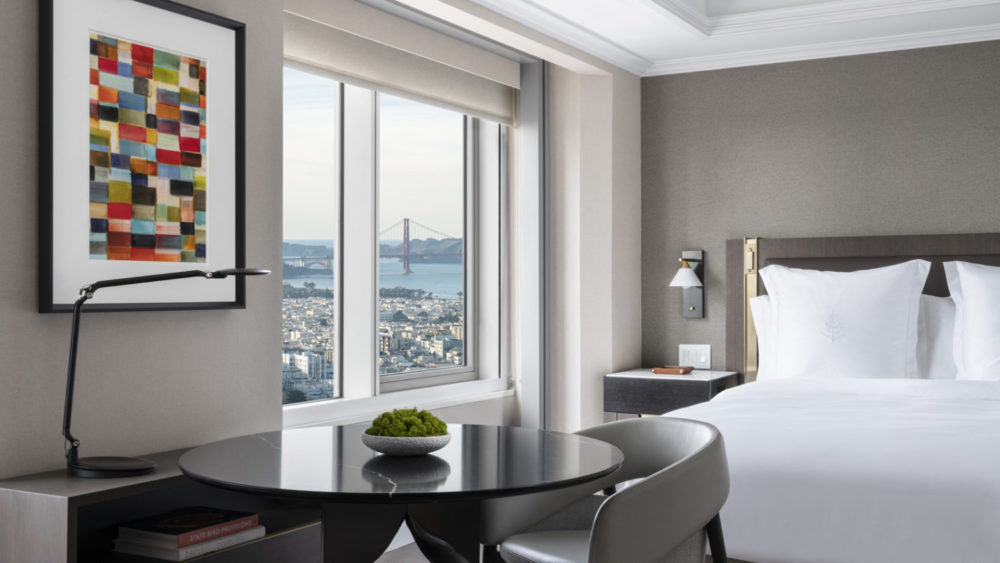 The new two-bedroom Embarcadero Suites, with their spacious, studio-style layouts, are particularly suited to setting up two workstations, meeting colleagues or spreading out with family.  For those working or distance learning, Four Seasons offers services including a loaner printer, extra chargers and cables, the ability to procure office supplies as needed, and tech support for hooking up devices to the 55 or 65-inch televisions.

In-room dining allows for everything from breakfast in bed to working lunches, romantic dinners and late-night snacking in the privacy of one’s own accommodation. The Snug x Four Seasons adds an exciting new dimension to the in-room experience as the Hotel partners with the popular local hotspot to create a menu of bespoke cocktails, all shaken, stirred and delivered directly to one’s door, ready to pour over ice and enjoy.

Menus may be accessed through the Four Seasons App, which also features a Chat option in 100+ languages, allowing contactless communication with staff to arrange for in-room dining, off-site restaurant reservations, laundry and housekeeping, local and airport transportation and much more to customise their stay. A new, state-of-the-art fitness centre on the third floor features natural light pouring in through large windows overlooking Sansome Street. 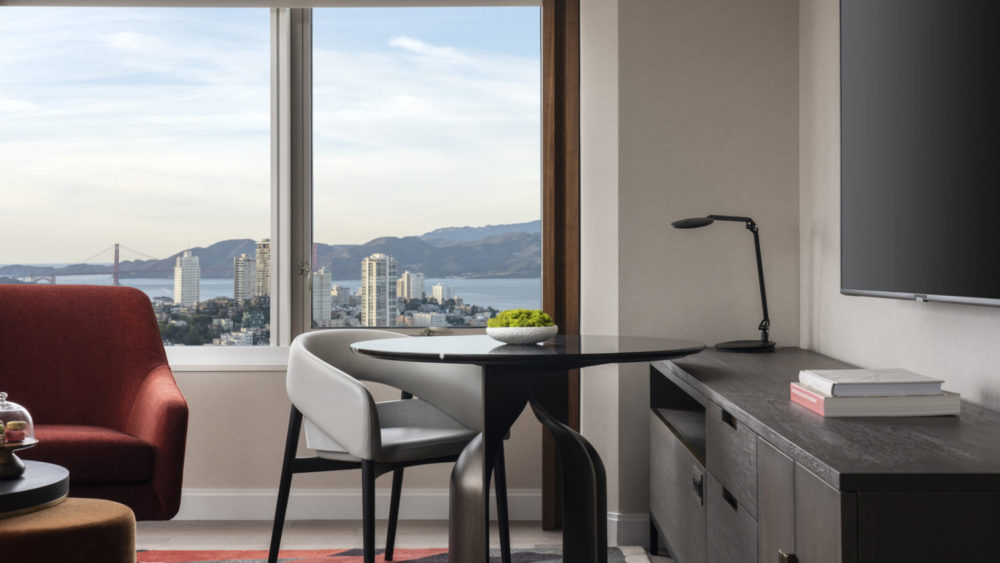 The View from Here

Every room and suite at Four Seasons Hotel San Francisco at Embarcadero offer panoramic views, allowing guests to spot such landmarks as the Golden Gate Bridge, the Transamerica Pyramid, Alcatraz Island, the Bay Bridge and San Francisco Bay. For another perspective, most floors feature a Sky Bridge with floor-to-ceiling windows on both sides. On the 48th floor, young and old will enjoy the “Eye Spy from the Sky” feature – the Hotel’s take on the classic “I Spy” game – added during the Hotel’s extensive renovations.

In 2021, Four Seasons Hotel San Francisco at Embarcadero will introduce an all-new street level restaurant showcasing California’s bountiful produce and world-renowned wines. Also on the horizon, an open-air Sky Deck on the 40th floor will feature unique pop-ups and other events.

Your next journeyWe work alongside the finest, highly sought-after travel specialists to deliver one of a kind, sustainable and luxuriously bespoke experiences across the globe
Plan an experience
Share
Four SeasonsHotelSan Francisco
About me

Royist is a leading boutique concierge offering luxury lifestyle management services to select members worldwide. Enjoy an unrivalled global 365/24/7 service.
View Editorial's profile
Publication — Explore a curated selection of the finest luxury experiences
View publication
Travel Journal Highlights
Bali
| Indonesia
Buahan, a Banyan Tree Escape, is set to debut in Bali in September 2021
In Buahan, one of Bali's most untapped enclaves, the resort and its no-walls, no-doors villas concept offers guests a unique "Naked Experience".
Cannes
| France
Ultima Cannes Le Grand Jardin is an ultra-luxe eco estate opening in 2022
Ultima Collection has announced the newest addition to its expanding portfolio, Ultima Cannes Le Grand Jardin.
Osaka
| Japan
W Hotels debuts in Japan with the Opening of W Osaka
Making its debut along vibrant Midosuji Boulevard, W Osaka will redefine the local hotel scene with the brand's spirited spin on luxury as the perfect addition to this electric city.
Peloponnese
| Greece
Create new stories in a safe, care-free environment at Costa Navarino, Peloponnese
Located in the pristine region of Messinia , Costa Navarino is surrounded by lush nature in an idyllic seaside setting.
Mallorca
| Spain
Four Seasons Resort in Mallorca is set to open in 2023
Originally opened in 1929, the existing hotel will undergo extensive renovations before it is unveiled as a Four Seasons experience.
Athens
| Greece
One&Only Aesthesis to debut on the Athenian Riviera in 2022
Tucked away in a legendary hideaway on the dramatic Glyfada seafront, glamour will return to this fabled location, with a bacchanalian celebration of Athens through One&Only’s ultra-luxury lifestyle experience.
Sicily
| Italy
San Domenico Palace, Taormina, A Four Seasons Hotel welcomes guests in Sicily
With just 111 guest rooms and suites, the atmosphere is intimate, as though returning to a treasured friend's seaside home each year.
Montalcino
| Italy
Experience sustainable luxury at Casa Ojalá Rosewood Castiglion Del Bosco, Montalcino
Hospitality romance without equal in the heart of the ancient Val d’Orcia, a village of the most authentic elegance, that of simplicity, according to Massimo and Chiara Ferragamo.
Noonu Atoll
| Maldives
Velaa Private Island, Maldives—an exceptional and timeless private luxury retreat
Located north from Malé, within the constellation of islands that form the Noonu Atoll, Velaa Private Island, brings a lasting meaning to “private moments” in the Maldives.
Grand Baie
| Mauritius
LUX* Grand Baie Resort in Mauritius is set to debut in November 2021
The highly anticipated LUX* Grand Baie Resort & Residences will open on 1 November 2021, unveiling a new generation of boutique-style resort for the modern, discerning traveller.
Grace Bay
| Turks And Caicos
Set along one of the world’s best beaches, The Ritz-Carlton debuts in Turks & Caicos
Situated on the world-famous Grace Bay in Providenciales, The Ritz-Carlton, Turks & Caicos offers an idyllic tropical getaway.
Copenhagen
| Denmark
Embrace conscious luxury living in the heart of Denmark at Villa Copenhagen
Villa Copenhagen offers guests an escape from the everyday with earth-friendly amenities, a rooftop pool and award-winning suites.
by Sophie Smith
View Travel Journal
Discover our membership —  ™Request Invitation
We use cookies and similar technologies to give you the most relevant experience by remembering your preferences and repeat visits. By clicking “Accept”, you consent to the use of all cookies.
Cookie settingsACCEPT
Manage consent