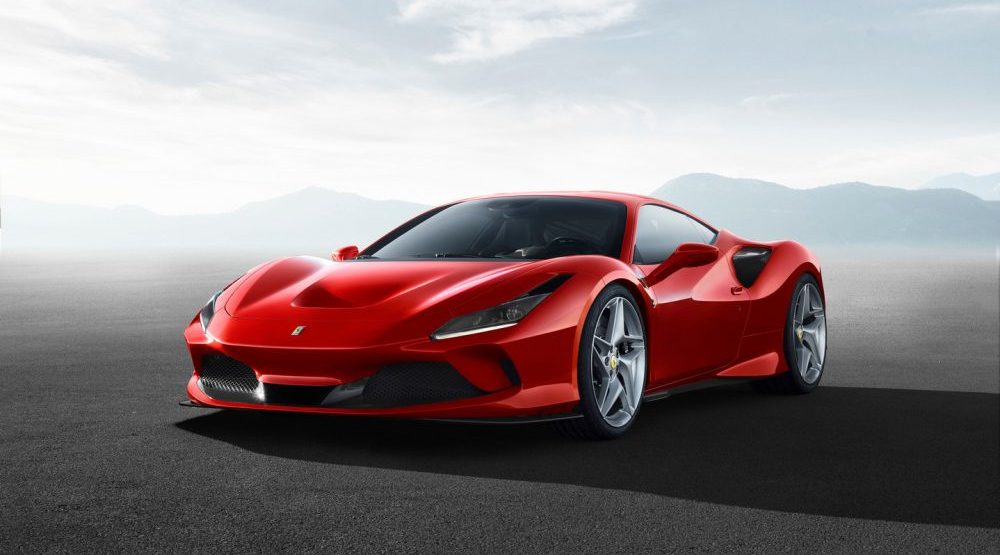 F8 Tributo is the new mid-rear-engined sports car that represents the highest expression of the company’s classic two-seater berlinetta. The name is an homage to both the model’s uncompromising layout and to the engine that powers it – with a massive 720 cv and a record specific power output of 185 cv/l, it is the most powerful V8 in Prancing Horse history for a non-special series car and sets the benchmark not just for turbos, but for engines across the board.

Ferrari has been honing the scope of abilities of this architecture, which creates an optimal weight balance, to perfection for over four decades. The result is the F8 Tributo, which is one of the fastest, most thrilling and communicative supercars ever. The new car replaces the 488 GTB, with improvements across the board, providing even better control on the limit along with greater on-board comfort. The F8 Tributo punches out 50 cv more than the car it replaces, is lighter and benefits from a 10% improvement in aerodynamic efficiency along with the latest version of the Side Slip Angle Control, now in 6.1 guise. So while the F8 Tributo offers the highest levels of performance of any car in the current range, that performance is also very usable. 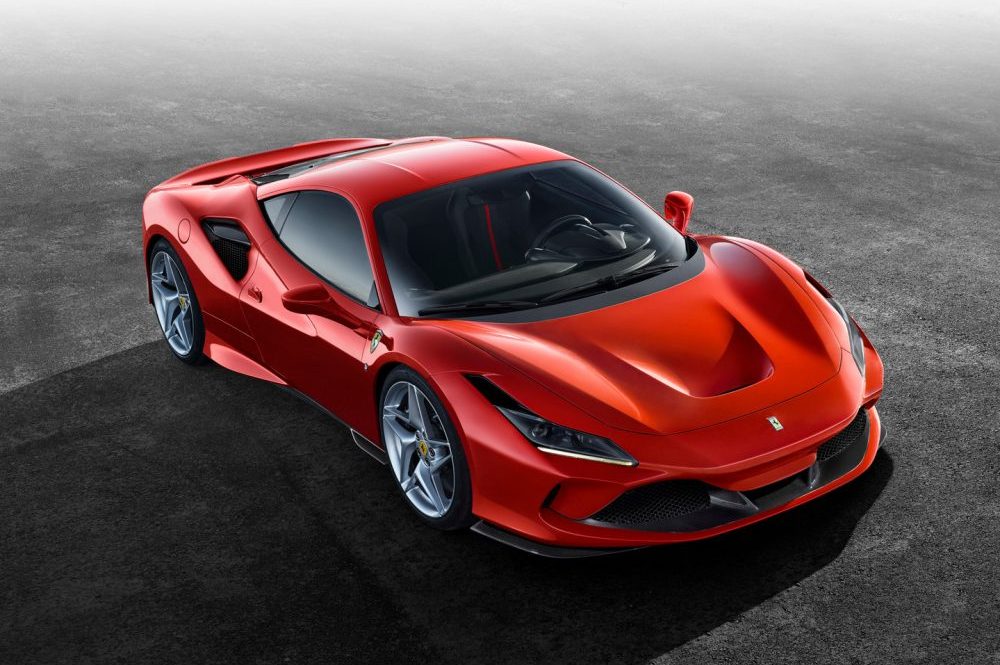 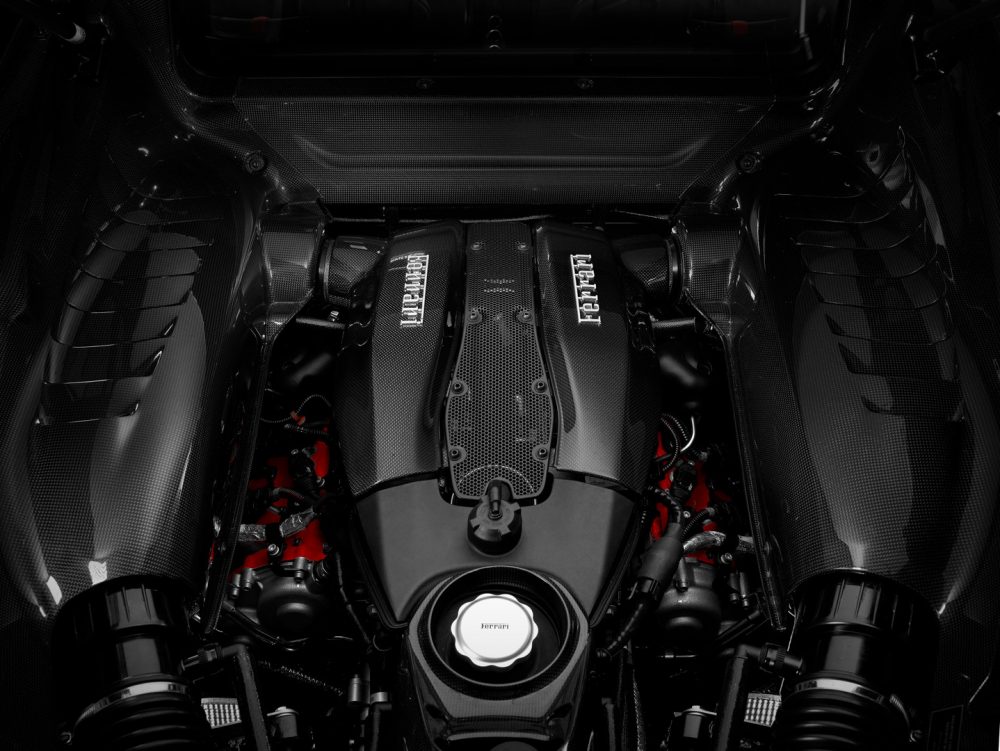 The F8 Tributo delivers its 720 cv without the slightest hint of turbo lag and produces an evocative soundtrack. Instantaneous power is matched by exceptional handling thanks to advanced vehicle dynamics solutions. These include a new version of the Ferrari Dynamic Enhancer (FDE+) which can be activated in the manettino’s RACE position for the first time, a move designed to make performance on the limit easier to reach and control for an even greater number of drivers.

The steering wheel rim is also smaller in diameter to enhance the level of tactility and make the car feel even more State-of-the-art aerodynamic solutions incorporated into the car’s body help ensure that the extraordinarily powerful engine can be fully exploited. As with the 488 Pista, the F8 Tributo’s aero package is directly evolved from the track and it adopts several features from the 488 Pista designed to help manage engine heat, including, for instance, the rearward-angled front radiators and the dynamic engine air intakes positioned either side of the spoiler instead of on the rear flanks. 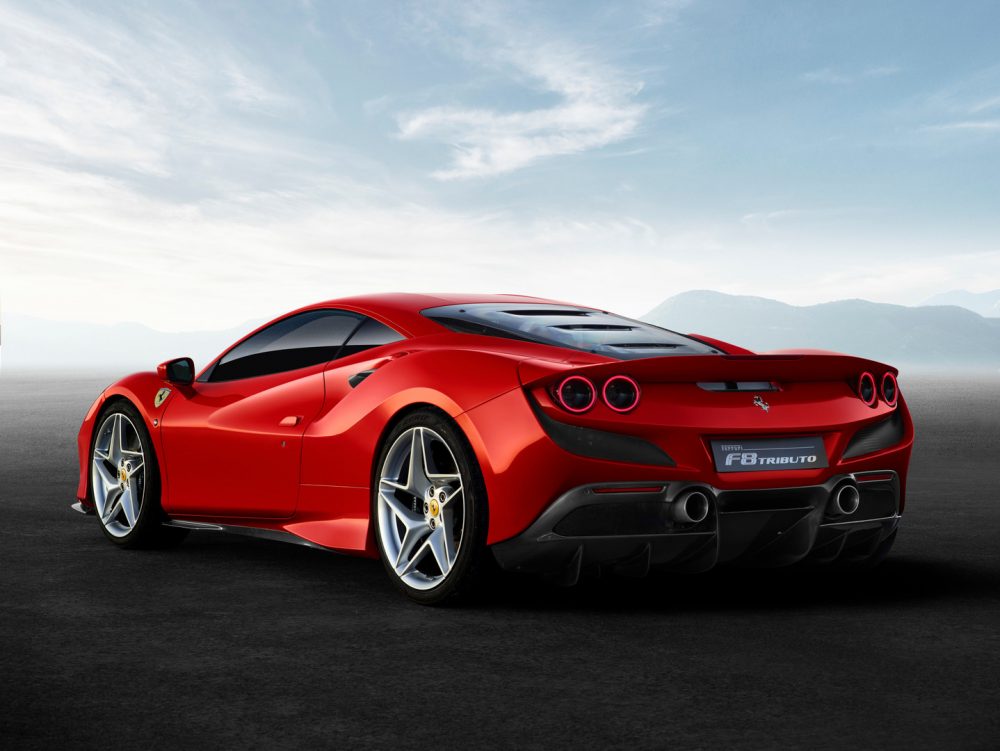 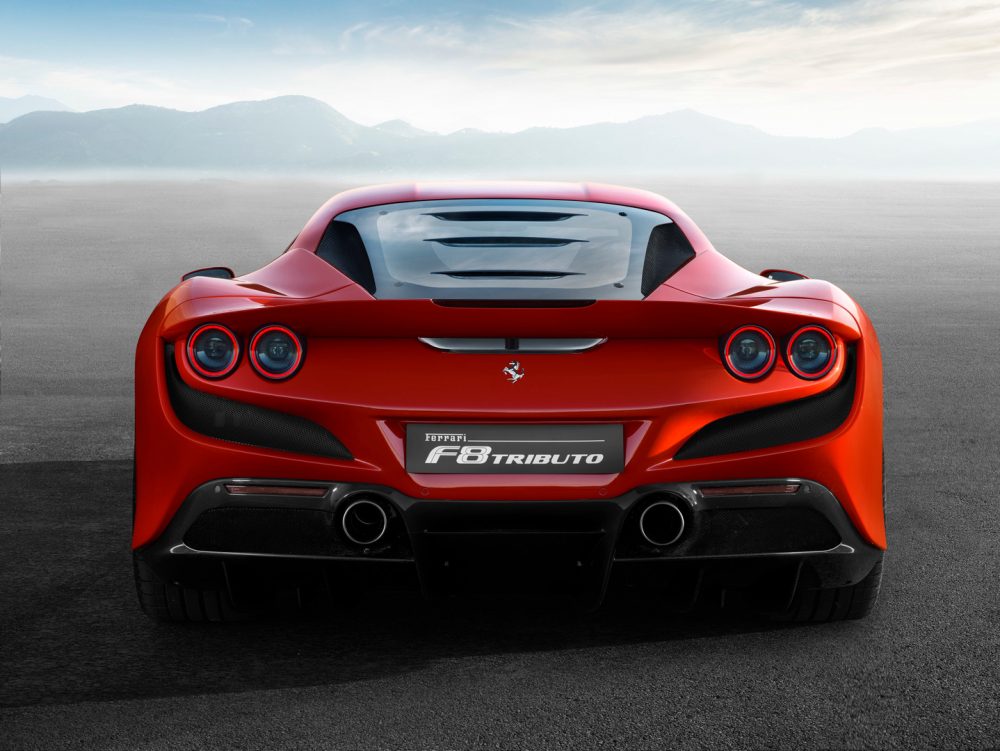 The front of the car is characterised by the S-Duct, a solution that made its debut on the 488 Pista, but which has been redesigned to suit the extensive modifications made to this area of the car. The result is that the S-Duct alone contributes an impressive 15% to the overall increase in downforce compared to the 488 GTB. The new, more compact, horizontal LED headlights allowed Ferrari’s aerodynamicists to incorporate new brake cooling intakes in combination with those on the outside of the bumper, the aim being to improve air flow throughout the entire wheelarch and thereby avoid having to increase the size of the braking system to cope with the car’s greater speed. 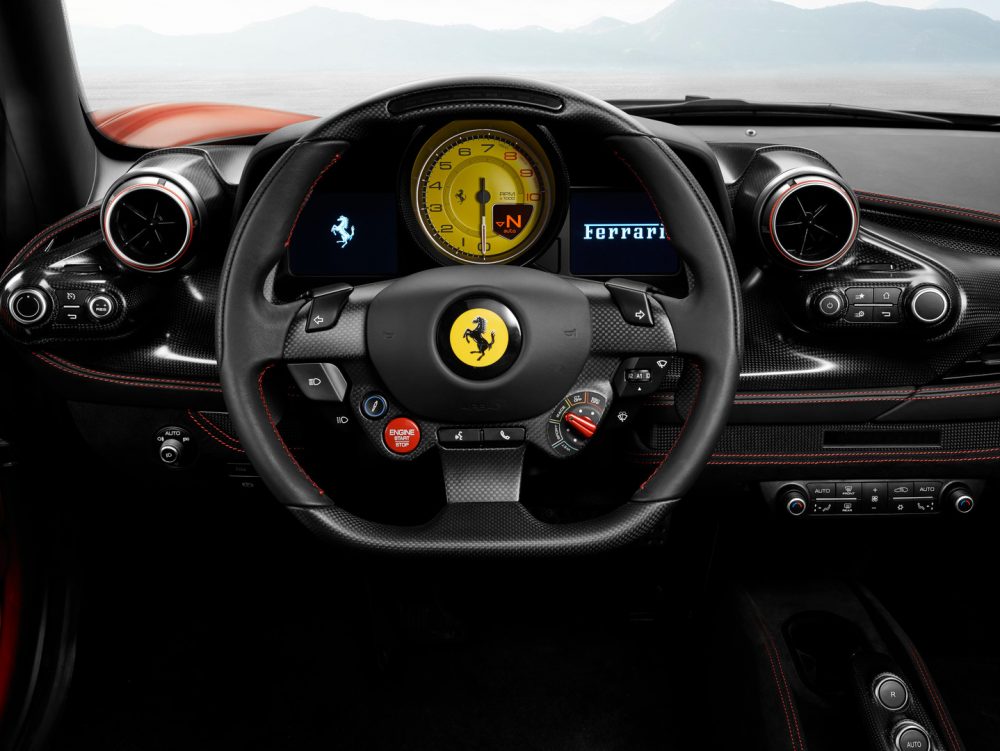 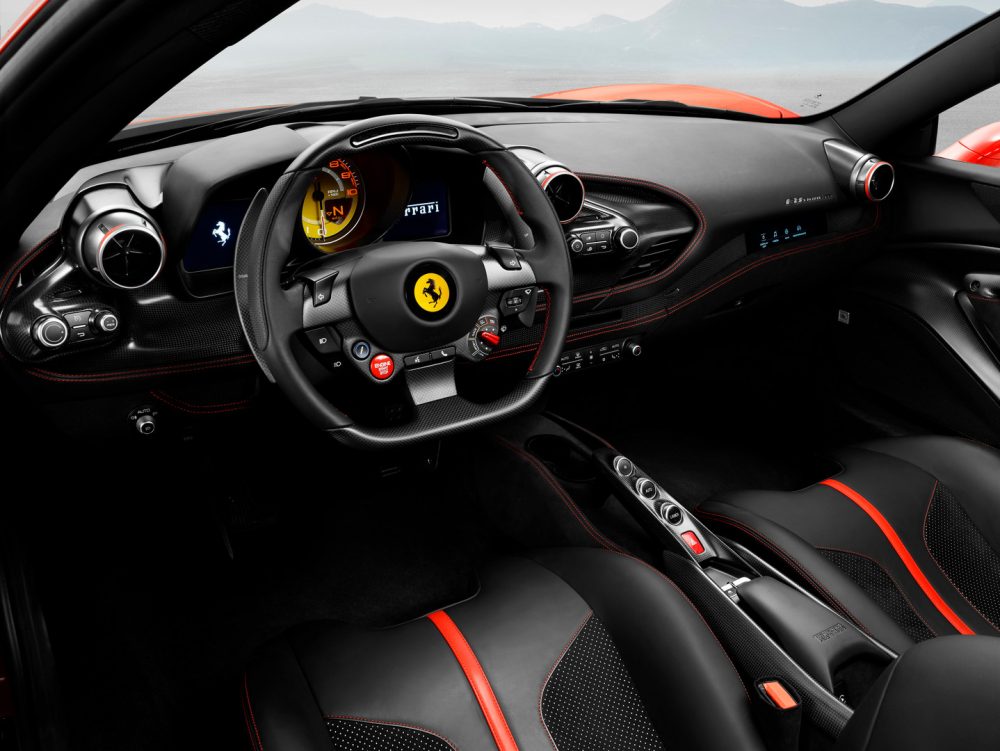 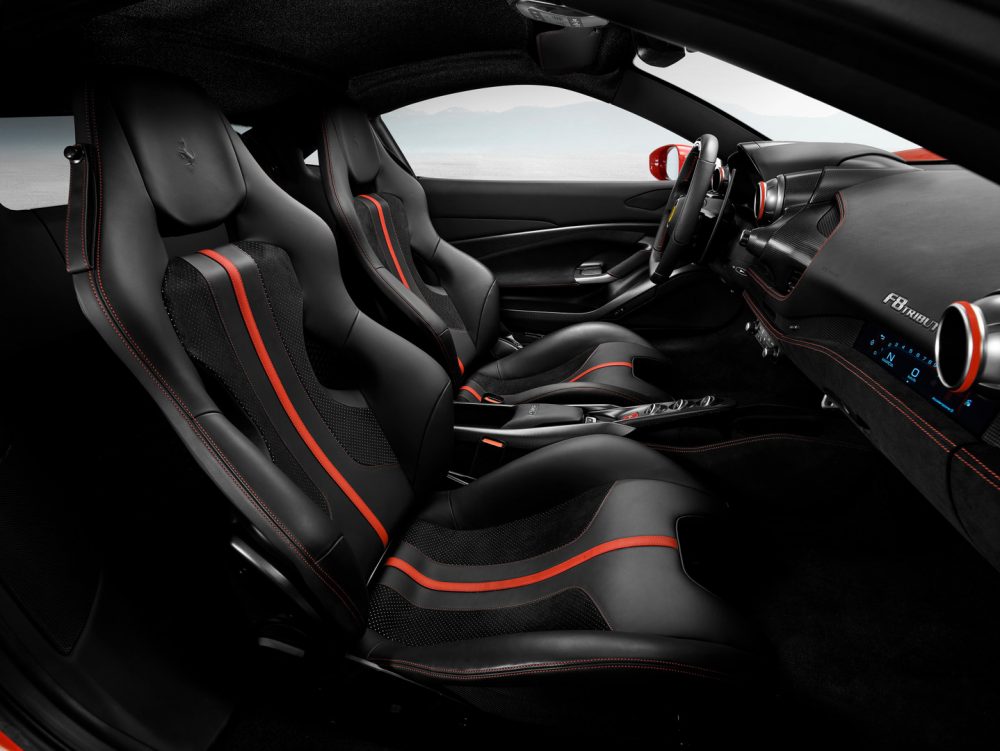 The new Lexan rear screen showcases the engine compartment and also brings a modern twist to the most distinctive design element from Ferrari’s most famous V8, the F40. The louvres help extract hot air from the engine compartment without impacting the efficiency of the blown spoiler which has been further evolved to increase downforce generated at the rear. The spoiler wraps around the tail lights, visually lowering the car’s centre of gravity and allowing a return to the classic twin light cluster and body-coloured tail, another signature of the early 8-cylinder berlinettas like the very first in the legendary series, the 1975 308 GTB.

The cabin retains the classic, driver-oriented cockpit look typical of Ferrari’s mid-rearengined berlinettas, but every element of the dash, door panels and tunnel, has been completely redesigned. The new generation HMI (Human Machine Interface), complete with round air vents, new steering wheel and controls as well as a new 7” passenger touchscreen display, significantly enhance the on-board environment for driver and passenger.

Motor EnquiryThrough our preferred partner network, we connect our discerning audience and members with leading automobile specialists to facilitate a wide range of supercars and vintage cars acquisitions.Make an enquiry
Share
FerrariSupercar
About me