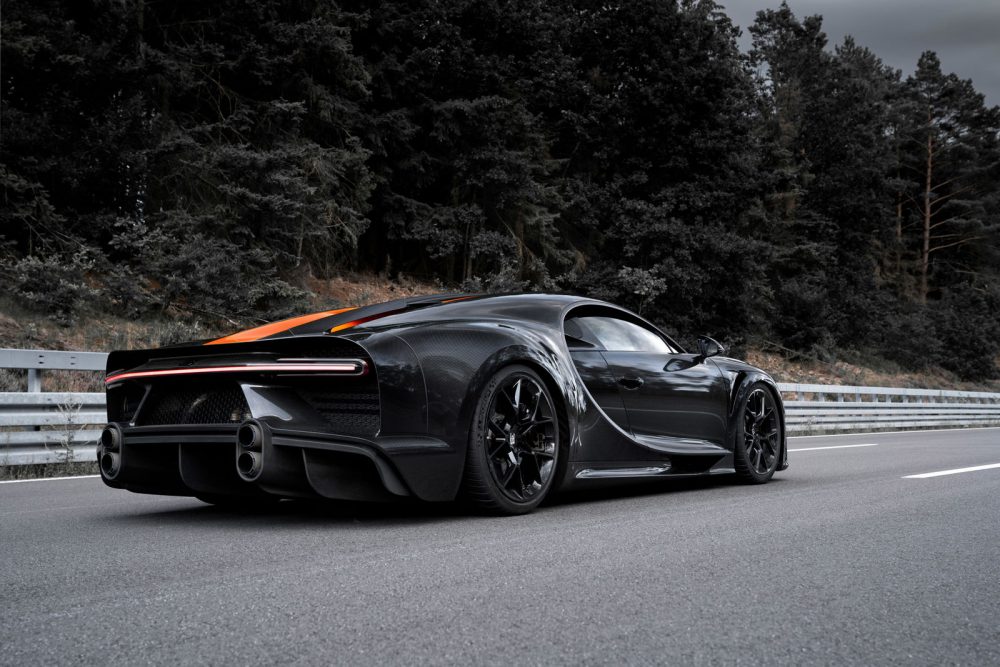 Just a few weeks after the sensational record-breaking run undertaken by Bugatti – when for the first time a hyper sports car drove faster than 300 miles per hour – the French brand is showcasing a very special edition based on this new Chiron derivative: the Bugatti Chiron Super Sport 300+.

The special edition Chiron Super Sport 300+, limited to 30 units, is visually based on the record-breaking car. A few weeks ago, it became the first series-production car to break the magical 300-miles-per-hour barrier. Achieving a speed of exactly 304.773 mph (490.484 km/h), it is now the fastest production hyper sports car ever. But not only that: With an output of 1,176 kW/1,600 hp, the Chiron Super Sport 300+ exceeds the Chiron by 100 hp.

“After the incredible speed record of more than 300 miles per hour, which we were the first series manufacturer to achieve, we’re now offering our customers the Super Sport 300+ – a very special edition model and the fastest Bugatti ever”, says Stephan Winkelmann, President of Bugatti. “But the Chiron Super Sport 300+ is more than just the fastest series-production sports car in the world. It is a testimony to Bugatti’s technical refinement, masterly workmanship and enormous attention to detail.” 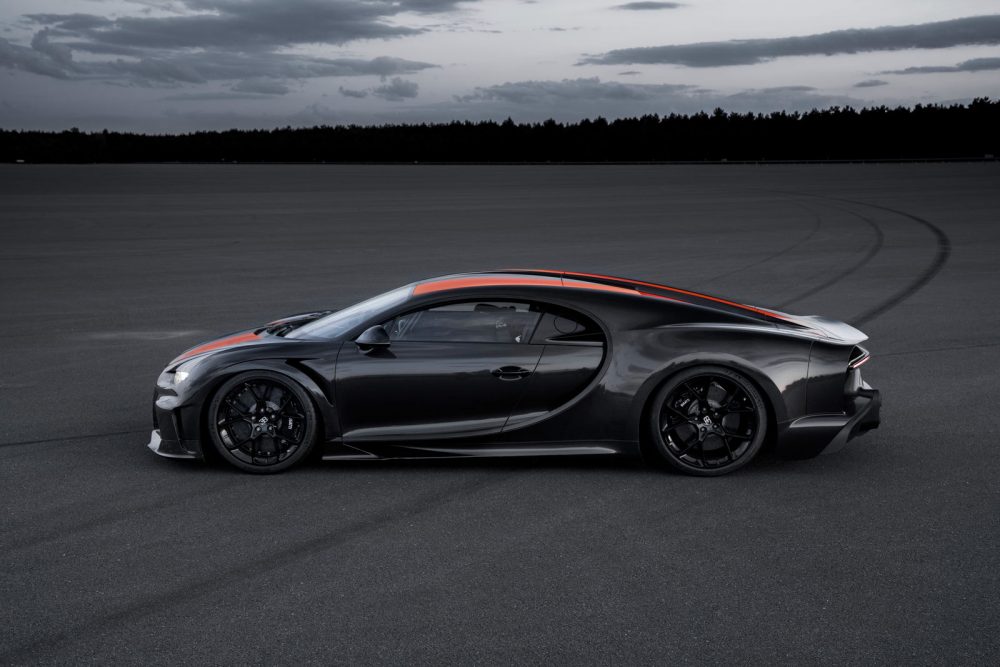 The Chiron Super Sport 300+ is visually distinct from the Chiron, not least due to its extended and aerodynamically optimised body, which is designed for extremely high-speed travel beyond 420 km/h. The Air Curtains installed at the car’s front corners guide excess pressure developing at the front air inlets towards the sides of the hyper sports car. At the same time, air outlets on the wheel arch and directly behind the front wheels dissipate excess pressure from the wheel arch, creating a slight amount of negative lift at the front to reduce the drag. Modifications are also very prominent at the rear.

The longer rear end, the so-called Longtail, allows the laminar flow to pass over the vehicle for longer to thus reduce the aerodynamic stall by over 40 percent. Thanks to a modified exhaust tailpipe configuration, the diffuser in the centre of the rear end can almost generate a sufficient amount of negative lift by itself, meaning that the wing can consequently remain retracted in Top Speed mode. As a result, the drag at the rear has been improved even more as negative lift generated by wings and spoilers would otherwise contribute to the drag. 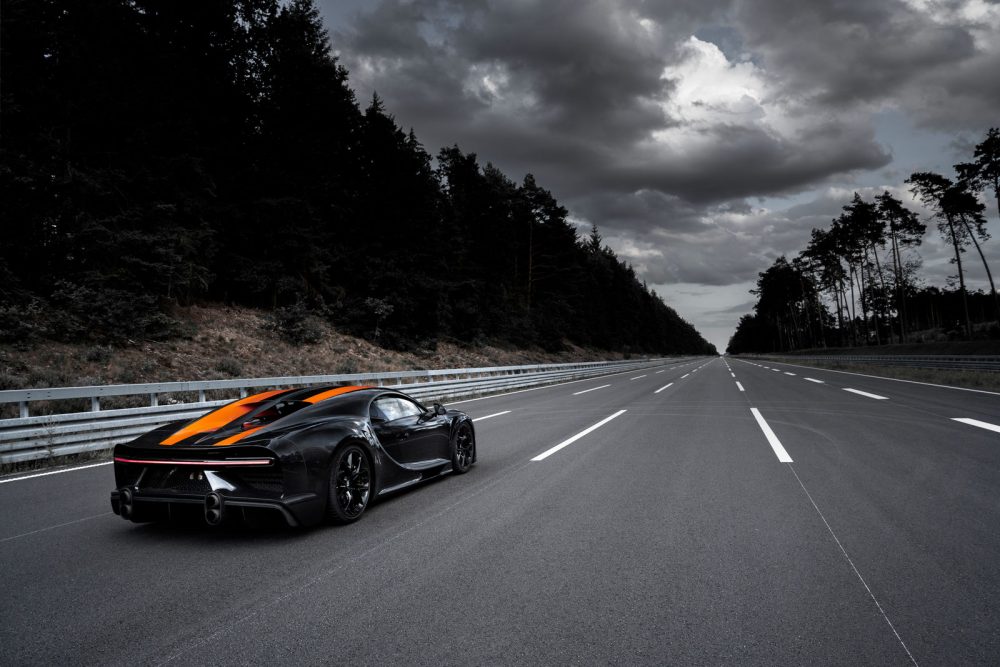 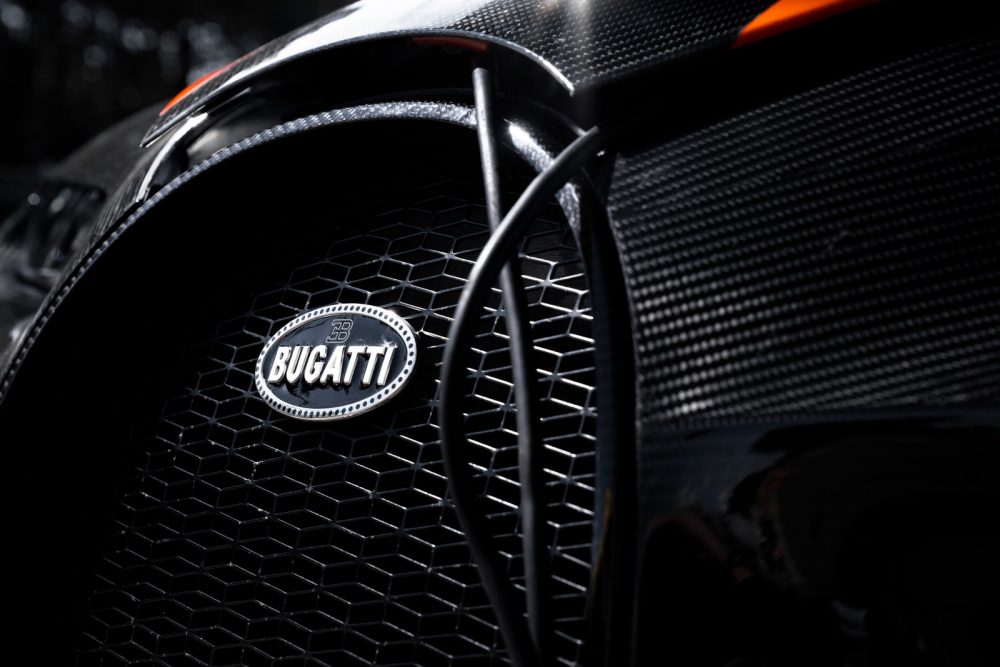 The body is made of exposed, jet-black carbon fibre set through in the centre with racing stripes in Jet Orange. The black engine cover is made of carbon, as is the windscreen wiper. At the front you can recognise the special model by the Bugatti “Macaron” logo made of genuine silver and black enamel. The extremely light magnesium wheels are finished in “Nocturne”, as are all trim parts. Passengers are welcomed with the lettering “Super Sport 300 +” in LED lighting at the door opening.

The interior is dominated by black carbon, leather and Alcantara in Beluga Black, complemented by colour highlights in Jet Orange. On the carbon door sills, the exclusive lettering likewise radiates in this colour, as do the headrests, the knee support in the centre console and the fine double-stitched seams. All interior trim parts on the other hand have a black anodised finish, while the rear-view mirror and centre line are painted in Beluga Black. 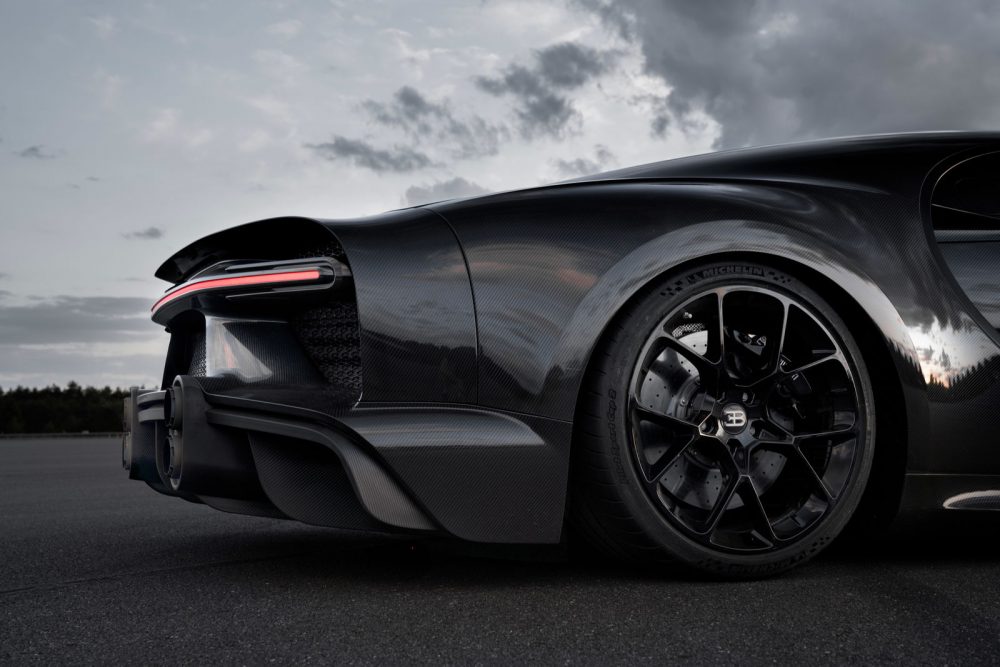 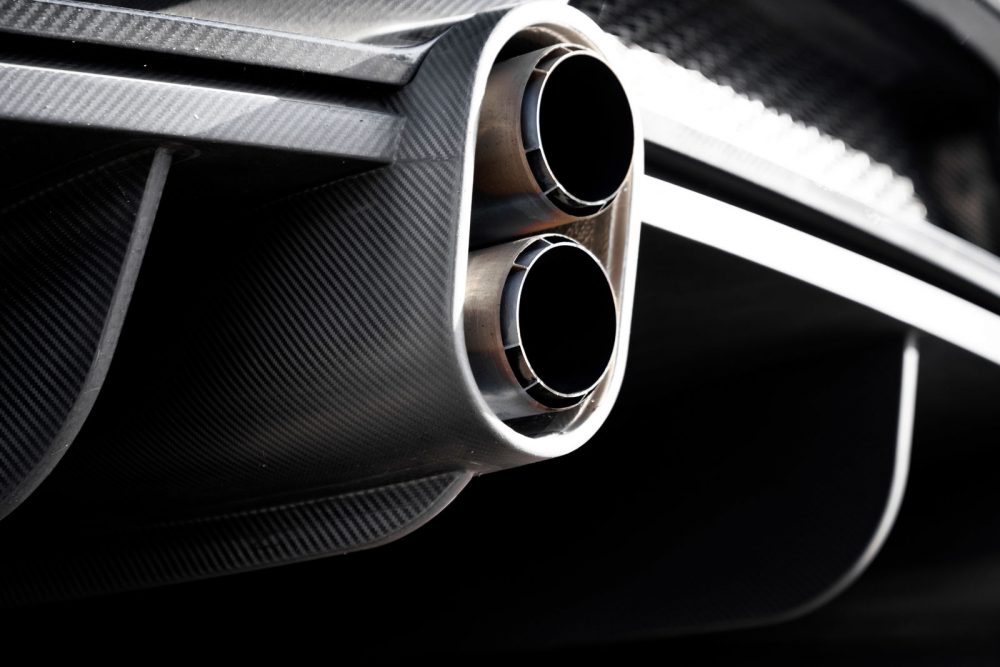 “With the Super Sport 300+ we pay homage not just to our glorious history with its numerous speed records but also to the performance of the entire record-breaking team. They were the ones who tackled the challenge of driving over 300 miles per hour,” says Stephan Winkelmann, President of Bugatti. “For this reason, the Super Sport 300+ is more than just an edition. It is by far the fastest luxury hyper sports car in the world and a genuine Bugatti in every fibre of its being – uncompromisingly beautiful, fast, comfortable and exquisite.”

The Super Sport 300+ was showcased as the grand finale of the Grand Tour 2019, a rally that takes in the most important stages in the life of Ettore Bugatti – from Milan via Monaco and Paris to Molsheim in Alsace. The first vehicles of the limited edition model Super Sport 300+, restricted to 30 units, will be delivered to customers at a net unit price of 3.5 million euros in mid-2021.

Motor EnquiryThrough our preferred partner network, we connect our discerning audience and members with leading automobile specialists to facilitate a wide range of supercars and vintage cars acquisitions.Make an enquiry
Share
Bugattihypercar
About me