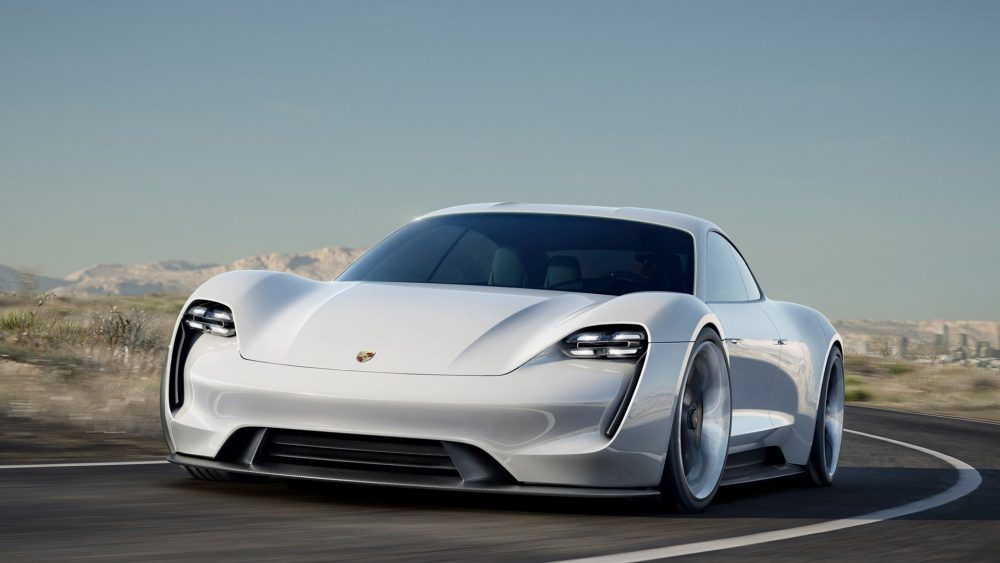 Porsche is here and they are doing it again. The milestones they achieved with their ever-green model Porsche 911, they are hoping to get the same returns from their newest offering to the performance automobile segment. But this time, it is not only about the future of the firm but also the future of the Luxury automobile sector and the world as we know for that matter.

The new Porsche Taycan is what the company calls a step closer to the future of mobility and yes it is something that truly portrays the need to embrace the life in Generation E (‘Electic‘ for those who are wondering).

It was in 2015 when the company unveiled its plans with a concept car ‘Mission E’, which they later announced that would be calling Taycan, pronounced Tie-con. The word translates to “lively, young horse“. A shoutout to the company’s DNA, a reference to the steed of the Stuttgart coat of arms on the Porsche crest. 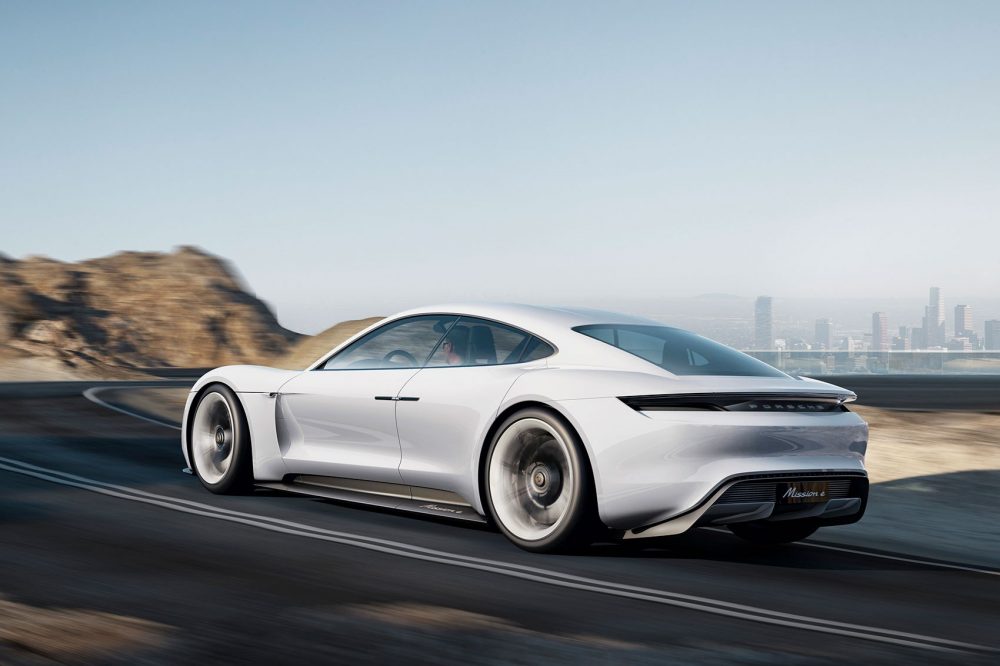 With the form of a four-door saloon, the styling of the sports car has design language of a coupe with cues such as a low roofline gradually sloping downwards at the rear. Almost like the old Porsche from the 50s and 60s mixed with the Porsche 919 forms to create something new altogether.

Since we are talking about the future, Porsche has maintained the expected vision for the sports car. A freestanding curved digital instrument cluster directly ahead of the driver seat, a small toggle-style gear selector, large infotainment screen stretching across dashboard to provide a display to not just the driver but the fellow passenger. 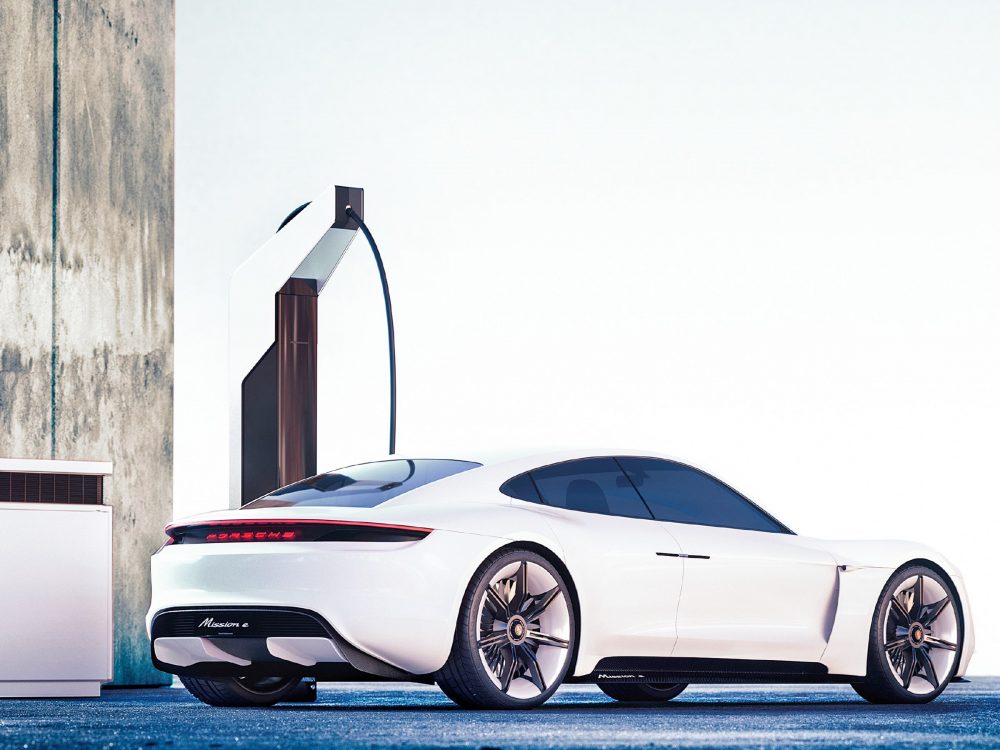 Coming to the performance specs, the Taycan is powered by an electric drivetrain with a permanent magnet synchronous motor housed within each axle in a layout that provides it with a four-wheel drive capability. The planned outputs for the sports car are speculated with options of 300kW (402hp), 350kW (469hp), 400kW (536hp) and 450kW (603hp). Although no official statements have been provided by the company till now as the production is expected to begin by the end of 2019.

The top spec Porsche Taycan (603hp) version is expected to deliver a performance of 0-62mph in well under 3.5 sec. This is in line to the performance of its peer the Porsche 911 turbo for the accelerative ability. The charging ability of this beast is something that the Porsche is proud to flaunt and it says that it keeps the sports car all prepared for the future advancements yet to come in electric vehicles.

The Taycan will is expected to have a range of over 250 miles and the most impressive feature is arguably the 800-volt system. That is double the voltage of most EVs and should allow a charge rate of up to 350 kW, which could charge the car up to 80% in only 15 minutes.

According to the officials at the firms, the expected price would be around $75000 for the base version and can go up as per the output version. This is just the beginning.

We are a leading boutique concierge offering luxury lifestyle management services to select members worldwide. Enjoy an unrivalled global 365/24/7 service.
Request an invitation
Brands Collection — Explore a curated selection of the finest motor brands
View the collection
Latest Supercars
Supercars
The Rolls-Royce Landspeed Collection draws inspiration from George Eyston’s remarkable life
Salt Flats’ fissured texture is perfectly reproduced in the engraved fascia; steering-wheel detail mimics the dark track-line marked on the surface during record runs.
Supercars
New Lamborghini Huracán Super Trofeo Evo2: Racing in Style
Lamborghini Squadra Corse presents the Huracán Super Trofeo EVO2, the latest version of racing car that will be used across each of the three continental Lamborghini series, starting in 2022.
Supercars
Introducing the 2022 Porsche 911 GT3 with Touring Package
A subtler choice that retains every ounce of the excitement, the feel and the performance you expect.
Supercars
The Bugatti Chiron habillé par Hermès embodies the pinnacle of luxury
A one-off creation for a passionate Bugatti collector with his personal vision inspired by artisan craftmanship that is one of a kind.
Supercars
Mansory F8XX—a complete vehicle conversion based on the Ferrari F8 Tributo
The "Mansory F8XX" is clearly and unmistakably aimed in the direction of high performance and uncompromising lightweight construction.
Supercars
Explore the brand new Super Sport SUV BRABUS 800
A high-performance luxury SUV with maximum space, comfort and power, based on Mercedes-AMG Mercedes-AMG GLS 63 4MATIC +.
Supercars
Ferrari 812 Superfast Special Edition—the ultimate expression of Ferrari DNA
Naturally-aspirated V12 unleashes 830 cv at 9,500 rpm for a sensation of endless power and performance.
Supercars Z Featured
Phantom Oribe is a bespoke Rolls-Royce Phantom in collaboration with Hermès
The magnificent bespoke Phantom Oribe was envisioned by the client as a 'land jet' to complement a recently commissioned private aircraft.
Supercars
The Aston Martin Vantage F1 Edition brings race-track Performance on the road
The new Vantage F1 Edition benefits from package of engine, chassis and aerodynamic upgrades with deliveries scheduled to begin May 2021.
Supercars
The 2022 Bentley Continental GT Speed is the most capable, performance-focused Bentley ever
This new model is designed, engineered, developed and exquisitely handcrafted at Bentley’s carbon neutral luxury automotive factory.
Supercars
The Pagani Huayra R is the most extreme Pagani Hypercar made exclusively for use on the track
The Huayra R is a celebration of passion – an extreme, untamed car, developed free from rules except for safety, with the sole aim of offering uncompromising performance. But first and foremost, it was designed to excite.
Supercars
McLaren Customer Racing presents the McLaren 720S GT3X track day model
McLaren Customer Racing has confirmed that an unrestricted version of its 720S GT3 race car is now available to order through McLaren Motorsport Retailers.
World of Supercars
Discover our membership —  ™Request Invitation
We use cookies and similar technologies to give you the most relevant experience by remembering your preferences and repeat visits. By clicking “Accept”, you consent to the use of all cookies.
Cookie settingsACCEPT
Manage consent