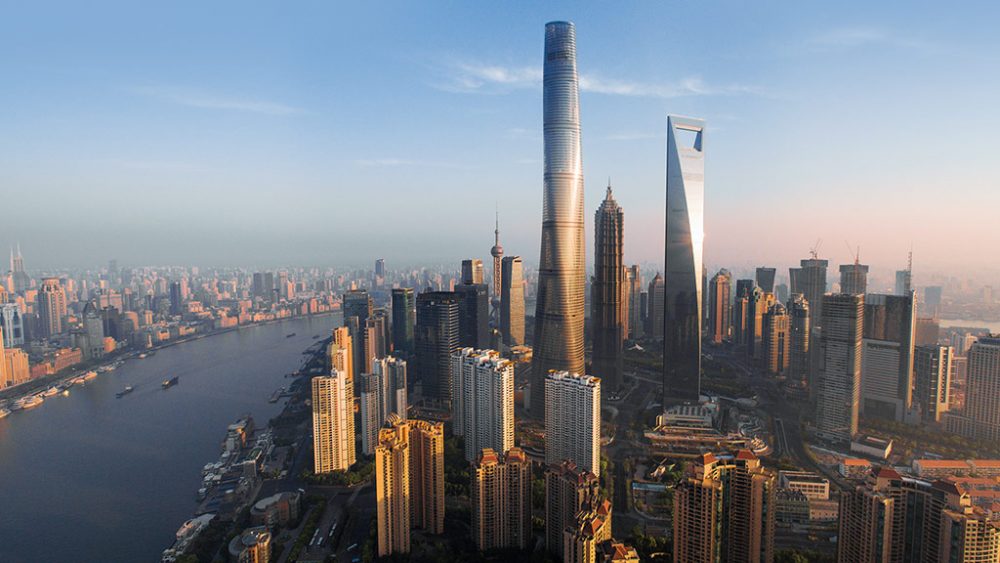 As the twenty-first century progresses, more and more of us live and work in cloud-touching skyscrapers. These glass and steel creations come in all shapes and sizes, but also in all price ranges. Shanghai Tower sits at the top of the list of the world’s most expensive residential buildings. Opened in 2015 in China’s biggest and most populous city, this multi-purpose building is the second tallest structure in the world, just behind Dubai’s Burj Khalifa. At a staggering 2073ft. this structure boasts an amazing 128 floors above ground and 5 floors below ground.

This building is the co-creation of the Shanghai Construction Group (SCG) and Gensler. SCG, a construction and engineering firm based in China, is the 16th biggest construction company in the world. Since their establishment over 50 years ago, they have been involved in most of the biggest and most innovative construction projects in a growing Chinese economy. They attribute their ongoing success to their consistent dedication to “technical innovation, management innovation and also system & structure innovation, so as to create more architectural wonders which will certainly be passed down from generation to generation”. 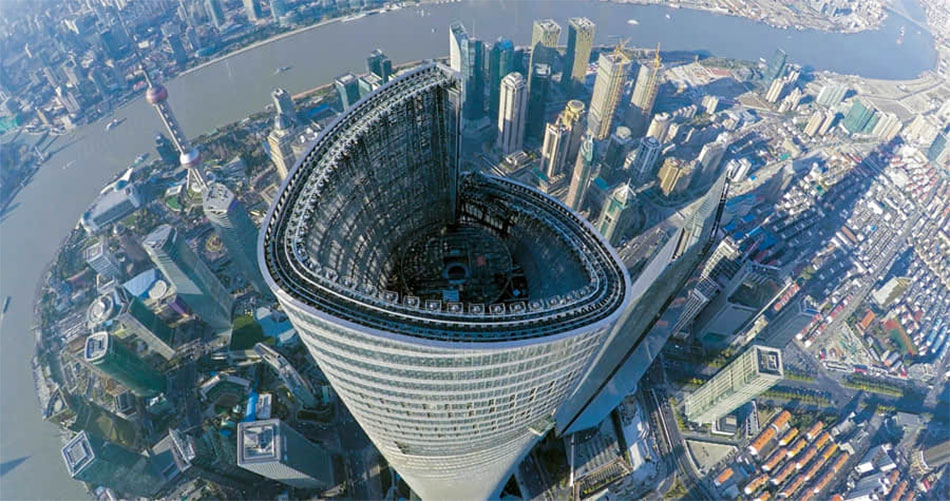 Gensler is an American architecture and design firm, founded in San Francisco in 1965. It has grown to be the most profitable design firm in America, generating annual revenue of over $1.2 billion. With 46 offices across 16 countries, their success is based on a collaborative style of working. The ability to work together and problem solve, regardless of position within the company, allows them to fulfil their clients’ needs and create innovative designs.

With 6,200,012 square feet of floor space available across the building divided into five functional areas, there endless opportunities for enjoyment and investment.

Current occupants include 24 hour offices for multi-national companies or financial services, retail spaces, business and cultural centres, luxury hotels, banquet halls, residential apartments, schools, and entertainment venues. Each of these zones are organised around a “sky lobby” – a plant-filled atrium filled with natural light. These social spaces are designed to act like a traditional courtyard and provide a refreshing break from modern life for workers and residents alike. The Shanghai Tower also boasts the highest observation deck in the world, located on its 119th floor. The building has 149 elevators, many of which hold the world record for travelling 1640ft in under a minute. 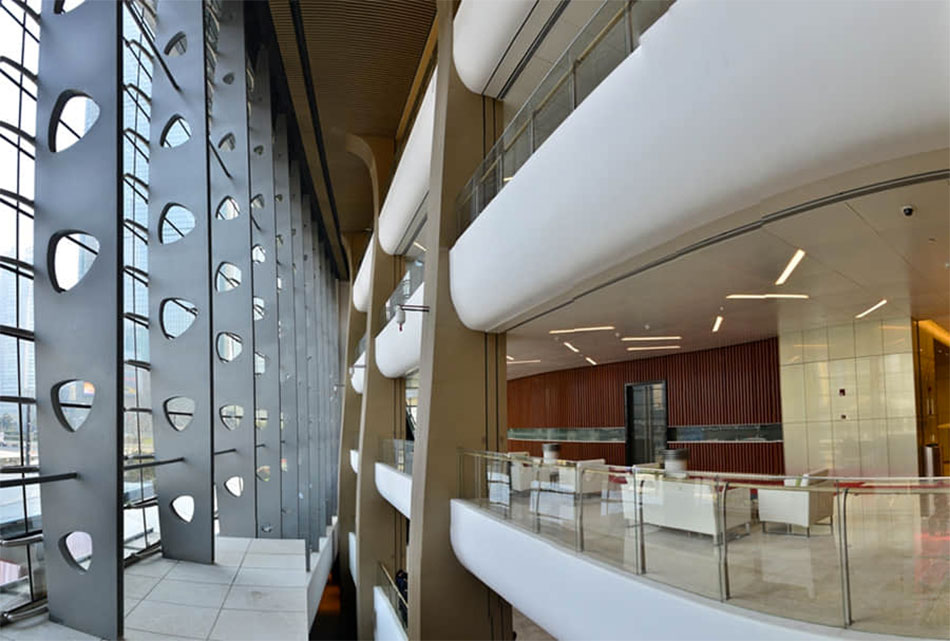 The tower also claims to be the world’s greenest skyscraper, and has been awarded a China Green Building Three Star rating and a LEED® Platinum Certification from the U.S. Green Building Council. Over 200 wind turbines are incorporated into the tallest floors and roof, generating 10% of the entire building’s energy through renewable sources. The tower automatically collects and recycles rainwater, as well as reusing waste water throughout the building. The combined cooling and heating systems are assisted by the natural cooling and ventilation created by the two layers of glass which wrap the building.

The two glass facades, one inner and one outer, fit together like tubes. The space between them varies from 3 to 33 feet, creating a gap which acts as a heat insulation layer, reducing costs and lowering the need for energy usage. Green spaces and sky lobbies help to create fresh air and reduce the building’s carbon footprint. Developers claim that a further 40 energy-saving measures have cut 34,000 metric tonnes of emissions from the building’s annual output. 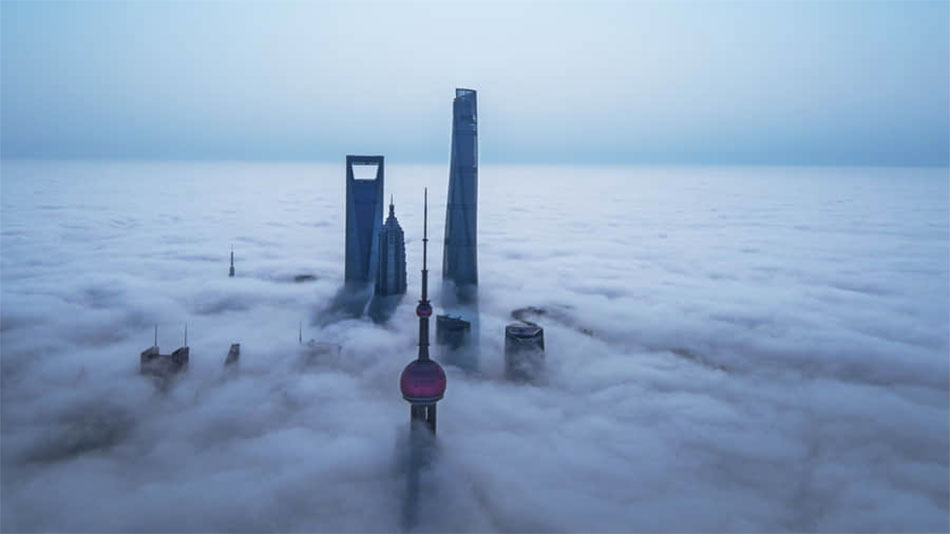 The tower has an unusual shape as its exterior spirals upwards like a snake or dragon. This curved form twists about one degree per floor to offset the effect of the wind on higher floors. A series of wind tunnel tests in the development stage suggests that this will reduce wind load and swaying by as much as 24 percent. In a typhoon-prone area like Shanghai, this is an important technique which will ensure the survival and longevity of the building. Conceptually, this twisting tower represents the dynamic, emerging, powerful city that it overlooks. Gensler says their “design team, led by Jun Xia, came up with the idea of the building twisting and tapering from its base. This gave the building its upward movement and reinforced the idea of emerging from the ground as it rose to the sky”.

At a basic level, the shape of the building is also influenced by the Yangpu River as it meanders and bends between the districts of Puxi and PuDong, passing by the tower’s location. This river has been a powerful symbol in Shanghai for years, and played a central role in the development of commerce in the city. The building is located between two existing skyscrapers – the Jin Mao Tower and the Shanghai Financial Centre – and together they form a triangle when observed from above, demonstrating the architects’’ careful consideration of the building’s surroundings.

Shanghai Tower is an iconic part of the city’s skyline, its spiral form represents the forefront of sustainability and modern community on a global market.There are endless possibilities for both business and pleasure within this remarkable tower.

Real Estate EnquiryObtain exclusive access to global real estate opportunities via our preferred broker specialists and renowed international property developers
Make an enquiry
Share
ChinaShanghaiTower
Brands Collection — Explore a curated selection of the finest real estate brands
View the collection
Featured Residences
Real Estate
Become part of the history of Dorado Beach with The Ritz-Carlton Reserve Residences
The history of the resort, built in the 1950s, is found in unlikely places and the story of Dorado Beach, a Ritz-Carlton Reserve should be heard, but it should also be experienced.
Real Estate
Discover luxurious Riviera Maya residences at Rosewood Mayakoba
Rosewood Residences is a distinctive collection of ultra-private villas situated along the tranquil lagoons of Mayakoba.
Real Estate Z Featured
130 William, New York private residences are designed not only to be seen, but to be felt
An energized view of Manhattan living by visionary architect, Sir David Adjaye who pushes against the conventions of tall glass towers with curves and arches inspired by local precedent.
Real Estate
Querencia private residences offer signature style and service right to the water’s edge
Querencia is positioned for tremendous growth as vacation and second home buyers seek multi-generational communities.
Real Estate
Mandarin Oriental Moscow offers exclusive luxury residences
Mandarin Oriental, Moscow will be home to Mandarin Oriental Hotel Group’s first branded residences and first luxury hotel in Russia.
Real Estate
111 West 57th Street, New York is a modern masterpiece perfectly centered on Central Park
The new luxury development is composed of the original landmarked Steinway Hall and a new tower by SHoP Architects with bespoke interiors by Studio Sofield.
Real Estate Z Featured
The Ritz-Carlton Residences, Sunny Isles Beach features a signature curvilinear silhouette
The Ritz-Carlton Residences, Sunny Isles Beach are a sumptuous urban oasis composed of 212 condominium homes.
Real Estate
The Residences at Mandarin Oriental, Honolulu is a new icon in an ever-evolving cityscape
The lushness and luxuriance of Hawai‘i colours every aspect of this bespoke urban address of only 99 private Residences.
Real Estate Z Featured
57 Ocean Residences offers one-of-a-kind residences with multi-dimensional wellness in Miami
On the sands of Millionaire’s Row, Miami’s most beautiful and exclusive stretch of beachfront, sits 57 Ocean—a distinctive building housing just 81 residences that sparkles among its peers.
Real Estate Z Featured
Lefay Wellness Residences offer a combination of luxury and the splendour of the scenic Dolomites
Lefay Resort & SPA Dolomiti is set in the idyllic scenery of the Dolomites, declared by UNESCO a “World Heritage Site”.
Real Estate
The Residences at Montage Cay, The Abacos, Bahamas
Where the emerald sea kisses a deserted shore and the Atlantic horizon becomes a blur of sky and ocean blues, there is a world where time is measured in tides and majestic sunsets.
Real Estate
Amanemu Private Residences, Japan is a serene wellness destination
Aman Residences offer their owners all the beauty, simplicity and personal attention of an Aman resort, balanced with the perfect seclusion of a private home in one of the world’s most remarkable locations.
View Branded Residences
Discover our membership —  ™Request Invitation
We use cookies and similar technologies to give you the most relevant experience by remembering your preferences and repeat visits. By clicking “Accept”, you consent to the use of all cookies.
Cookie settingsACCEPT
Manage consent