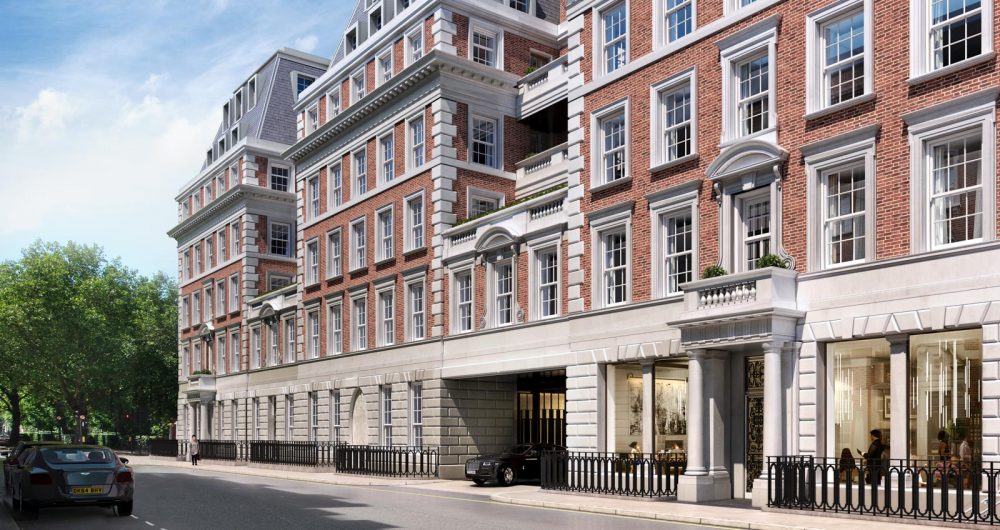 Demonstrating exceptional attention to detail, the award-winning British architects, Eric Parry, have maintained the character of the building by carefully dismantling, then reinstating its elegance. With raised ceiling heights of 3m up to 4.2m, the rooms’ gracious proportions are enhanced whilst period features are retained throughout.

At the same time, Yabu Pushelberg has created contemporary interiors with a nod to the heritage of the building and impeccable attention to detail to delight the most discerning of tastes. By selecting an exceptional variety of textures and a light contemporary palette, the understated elegance showcases effortless luxury within each delightful home. 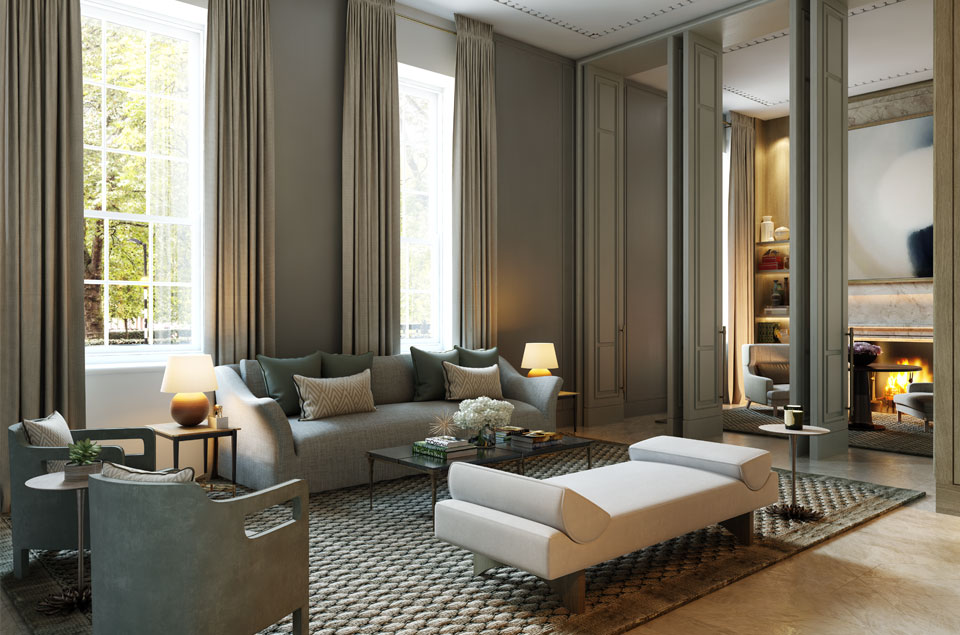 Mayfair – The Centre Of London For Over 300 Years 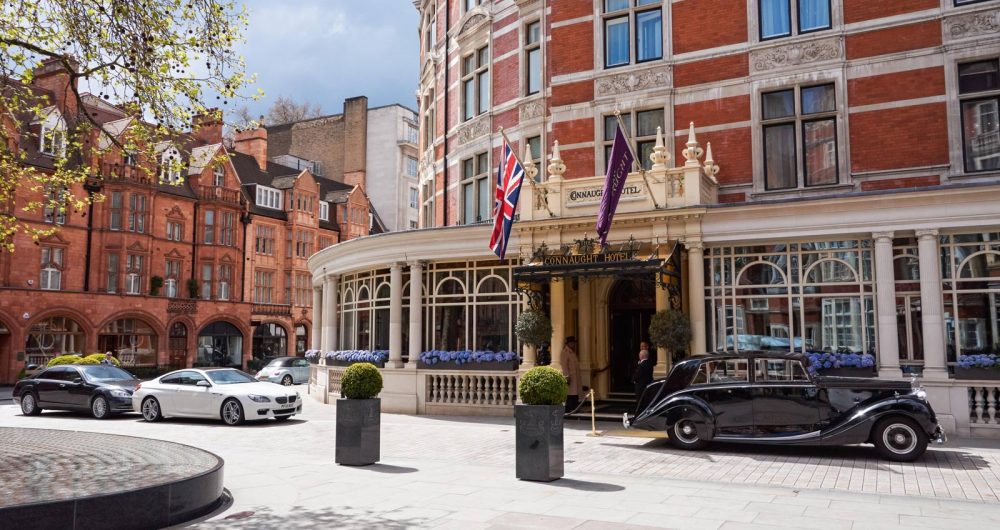 Named after the founding Grosvenor family, Grosvenor Square has long been the jewel in an unrivalled aristocratic property crown. Mayfair’s timeless elegance reflects both the city’s heritage and fine English culture, with some of the world’s most desirable streets, boutiques, Michelin-starred restaurants and exclusive private members’ clubs a mere stone’s throw away.

Spanning an entire floor of over 10,000 square feet, such luxurious amenities include a private screening room, residents lounge and an executive business suite. All of these stunning spaces are designed for the exclusive use of residents to make themselves at home. 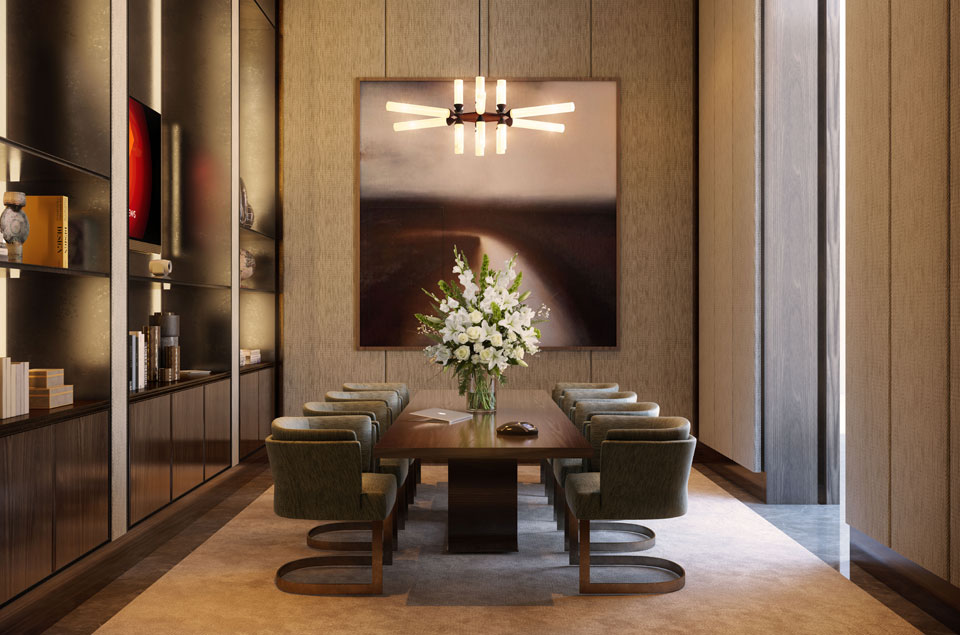 Lodha has anticipated every eventuality ensuring that No.1 Grosvenor Square is the most secure and safe address in London. Equipped with state-of-the-art security features and trained personnel on-site around the clock, residents will have peace of mind. In order to maintain privacy, a discreet and covered vehicle drop-off point provides private off-street access managed by the 24-hour concierge and secure valet parking.

Asset Sourcing EnquiryThrough our exclusive preferred partner network, we connect you to the finest luxury goods and asset sourcing specialists, no matter what your area of interest might be.Make an enquiry
Share
LondonResidences
About me

Royist is a leading boutique concierge offering luxury lifestyle management services to select members worldwide. Enjoy an unrivalled global 365/24/7 service.
View Editorial's profile
Brands Collection — Explore a curated selection of the finest real estate brands
View the collection
Featured Residences
Real Estate
Discover luxurious Riviera Maya residences at Rosewood Mayakoba
Rosewood Residences is a distinctive collection of ultra-private villas situated along the tranquil lagoons of Mayakoba.
Real Estate Z Featured
130 William, New York private residences are designed not only to be seen, but to be felt
An energized view of Manhattan living by visionary architect, Sir David Adjaye who pushes against the conventions of tall glass towers with curves and arches inspired by local precedent.
Real Estate
Querencia private residences offer signature style and service right to the water’s edge
Querencia is positioned for tremendous growth as vacation and second home buyers seek multi-generational communities.
Real Estate
Mandarin Oriental Moscow offers exclusive luxury residences
Mandarin Oriental, Moscow will be home to Mandarin Oriental Hotel Group’s first branded residences and first luxury hotel in Russia.
Real Estate
111 West 57th Street, New York is a modern masterpiece perfectly centered on Central Park
The new luxury development is composed of the original landmarked Steinway Hall and a new tower by SHoP Architects with bespoke interiors by Studio Sofield.
Real Estate Z Featured
The Ritz-Carlton Residences, Sunny Isles Beach features a signature curvilinear silhouette
The Ritz-Carlton Residences, Sunny Isles Beach are a sumptuous urban oasis composed of 212 condominium homes.
Real Estate
The Residences at Mandarin Oriental, Honolulu is a new icon in an ever-evolving cityscape
The lushness and luxuriance of Hawai‘i colours every aspect of this bespoke urban address of only 99 private Residences.
Real Estate Z Featured
57 Ocean Residences offers one-of-a-kind residences with multi-dimensional wellness in Miami
On the sands of Millionaire’s Row, Miami’s most beautiful and exclusive stretch of beachfront, sits 57 Ocean—a distinctive building housing just 81 residences that sparkles among its peers.
Real Estate Z Featured
Lefay Wellness Residences offer a combination of luxury and the splendour of the scenic Dolomites
Lefay Resort & SPA Dolomiti is set in the idyllic scenery of the Dolomites, declared by UNESCO a “World Heritage Site”.
Real Estate
The Residences at Montage Cay, The Abacos, Bahamas
Where the emerald sea kisses a deserted shore and the Atlantic horizon becomes a blur of sky and ocean blues, there is a world where time is measured in tides and majestic sunsets.
Real Estate
Amanemu Private Residences, Japan is a serene wellness destination
Aman Residences offer their owners all the beauty, simplicity and personal attention of an Aman resort, balanced with the perfect seclusion of a private home in one of the world’s most remarkable locations.
Real Estate
The Ritz-Carlton Private Residences, Paradise Valley, Arizona
One of the world’s most recognized luxury brands, The Ritz-Carlton, is making its entrance into Arizona’s most affluent and desirable area, the town of Paradise Valley.
View Branded Residences
Discover our membership —  ™Request Invitation
We use cookies and similar technologies to give you the most relevant experience by remembering your preferences and repeat visits. By clicking “Accept”, you consent to the use of all cookies.
Cookie settingsACCEPT
Manage consent