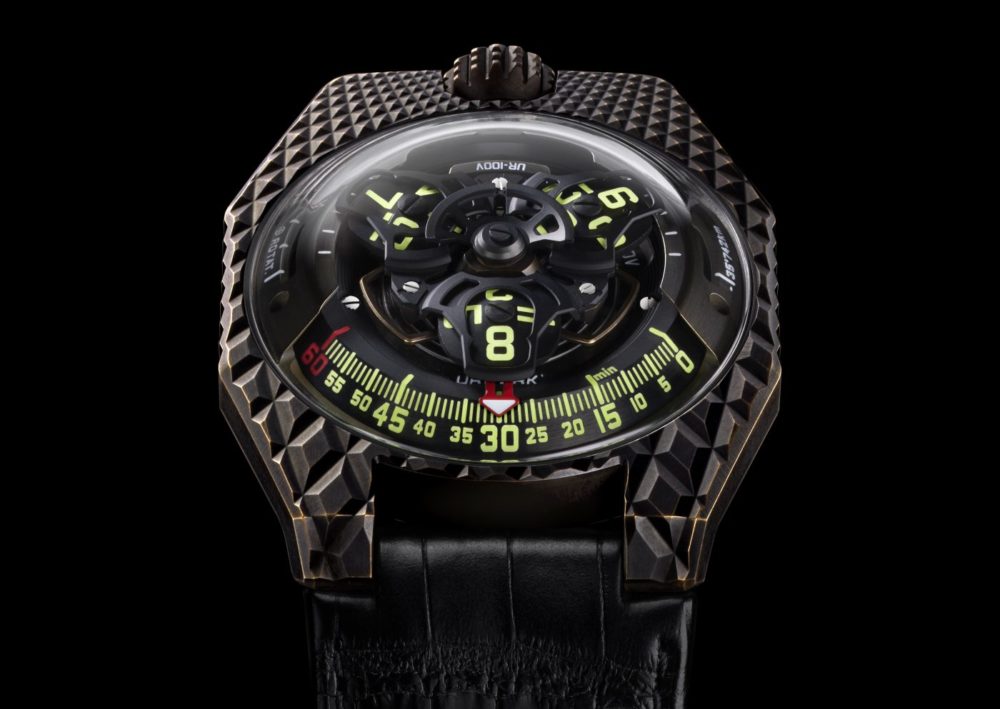 The UR-100V T-Rex is decidedly a creature you’ll want to tame. But wouldn’t want to stroke the eight-ton, 12-foot high Tyrannosaurus rex. In addition to its massive jaws equipped with 60 dagger-like teeth, it has a hide like a rasp. Best leave the creature to your imagination.

You might prefer to handle its namesake. The 41-mm UR-100V T-Rex features satellite wandering hours and a new type of selfwinding system. However, its hide, in a mosaic of scales, has a somewhat more sensual texture. It’s a watch for those who relish the sensational — and the rare — for only 22 are made. 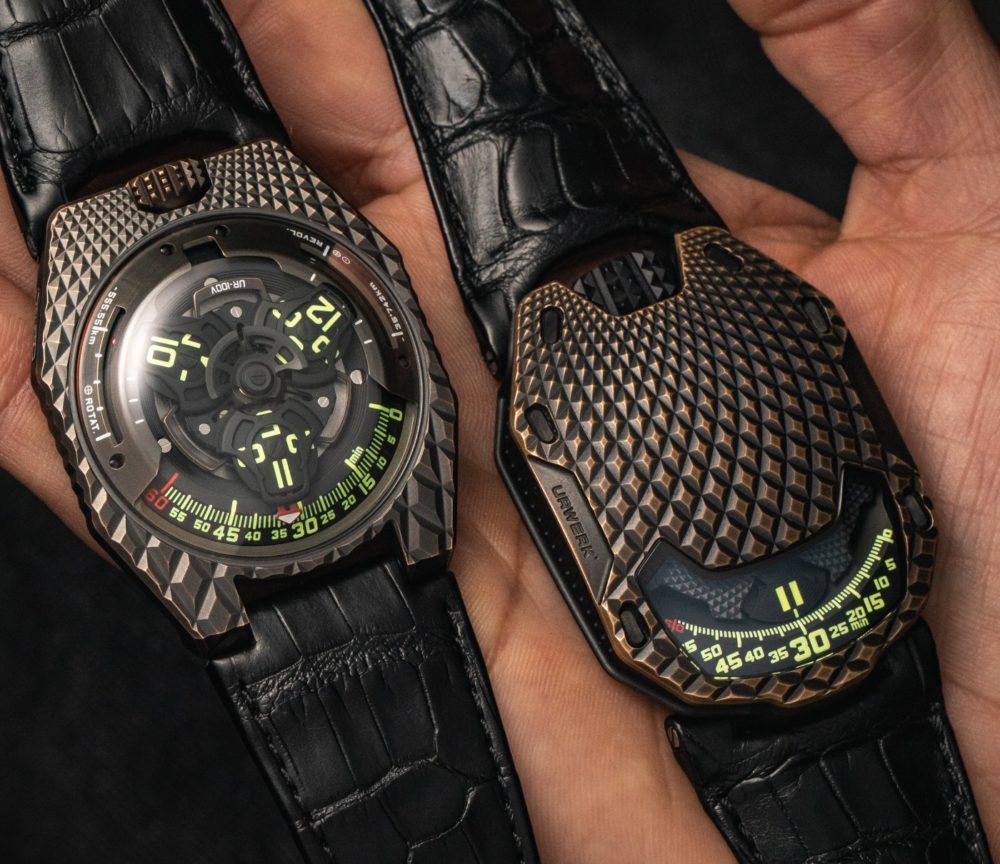 Its case is in solid bronze that has undergone three successive treatments. The first lies in the unusual composition of the alloy which results in a delicate patina. The bronze is then in the hands of a computer- controlled milling station that carves the pattern of scales on the top and sides of the case. The final processes, sand-blasting and Urwerk’s proprietary method of biochemical burnishing, give the watch its distinctive colour.

The scales, in the form of raised lozenges, cover the head and sides of this magnificent reptile and surround the flattened dome of sapphire crystal and the big knurled crown. The bevelled pyramids have been truncated and polished to present a surface that is pleasing to the touch, while the PVD blackened titanium caseback is fully skin compatible. 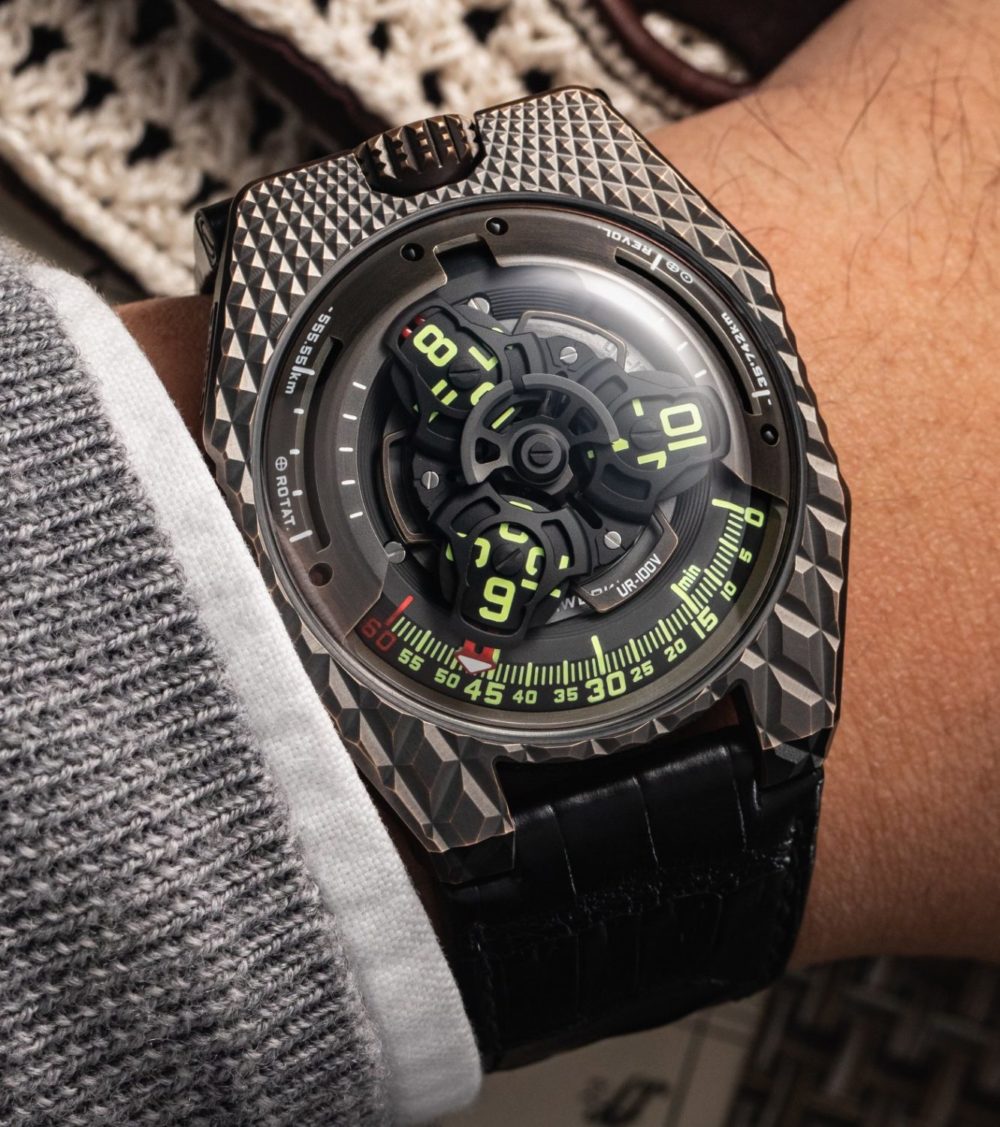 Nobody knows whether the ancient dinosaur had a voice, but the T-Rex watch certainly knows how to express itself. In Urwerk’s animal kingdom, the signature satellite indication does the talking. Three satellites, each of four hours, rotate on a three-armed carousel. In turn, each satellite, displaying the hour, carries a red pointer along a 60-minute scale.

The regular orbit of the hours, as old as time itself, replicates the planetary dance in miniature. The watch is wound while you wear it by a rotor. This is coupled to a device called the Windfänger that is specific to the UR- 100 models. It’s a planetary gear that limits the action of the rotor to avoid overwinding and excessive wear. 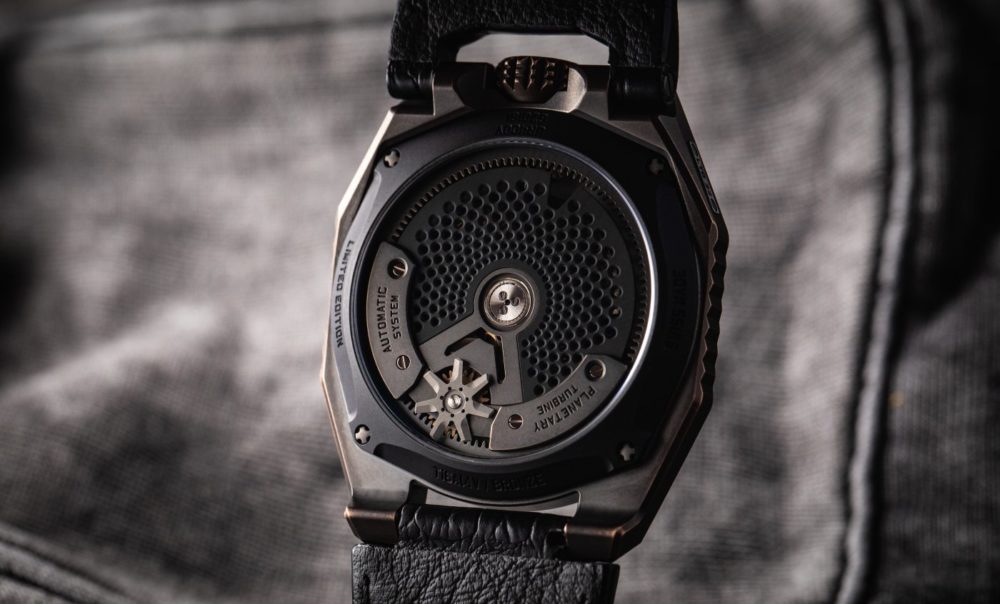 Finally, the UR-100V T-Rex has a feature that puts other watches into the dinosaur age. Once the red pointer of the satellite hours has completed its 60-minute journey, it reappears to show the distance travelled by our planet.

In the scale at 9 o’clock on the case the pointer shows the 555.5 km travelled by a point on the equator in a period of 20 minutes. The 20-minute scale on the other side of the dial shows the 35,742 km Earth travels in its orbit around the sun in that time.

Timepiece EnquiryObtain exclusive access to rare and highly sought-after timepieces, through our preferred partner specialists and luxury brand partnerships.Make an enquiry
Share
TimepieceUrwerk
About me