IN 2016, BOVET 1822 unveiled the Shooting Star tourbillon, the first timepiece in an exclusive collection dedicated to astronomy. The Astérium and Grand Récital tourbillons then followed in 2017 and 2018 respectively. Each of the three timepieces boasted groundbreaking technical specificities and explored new ways of measuring time, and each was also housed in a characteristic inclined case, inspired by and shaped like a sloped writing desk.

Designed by BOVET 1822 Owner, Mr. Raffy, the “writing slope” case features a bezel inclined at 6 o’clock. This ingenious idea makes it possible to diversify and organize the types of displays by using domes, rollers, discs, and three-dimensional hands to enhance intuitiveness, ergonomics, and elegance. The three-dimensional design prioritizes information for improved readability and brings the collector’s eye to the heart of the movement to discover the excellence found in each detail.

The Récital 26 Brainstorm® Chapter One presents a host of innovations and gives a glimpse of the scope of the unprecedented possibilities for interpreting timekeeping offered by the “writing slope” case. For this first Brainstorm® chapter, Mr. Raffy wanted a sapphire model. Chosen for its crystalline transparency, sapphire is also the second hardest material known after diamond. The lightness of sapphire is also unsurpassed, and in fact weighs less than titanium. This novel choice represented a major challenge for Maison BOVET’s technicians. While sapphire cases have been in use for almost forty years, their designs have, up to present, remained relatively simple, due to the machining and polishing constraints posed by this extremely hard material. The asymmetric profile of the middle, bezel, and glass of the “writing slope” case confronted engineers and technicians with hitherto unresolved difficulties. 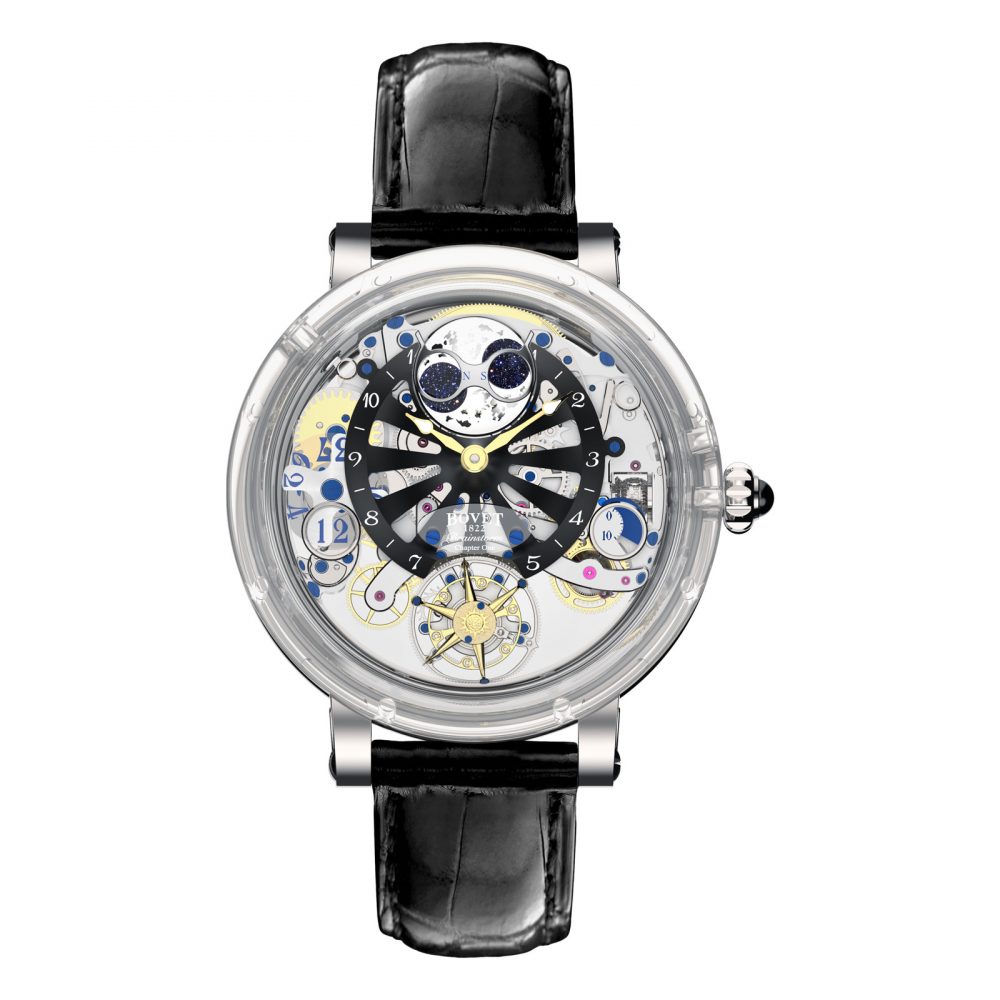 The middle And glass ultimately form a single element that conscientiously respects the original design of the collection’s inclined cases. The back consists of a bezel and four horns that have been machine-cut from grade 5 titanium. It goes without saying that this bezel features a sapphire glass that opens generously onto the back of a movement and reveals a wealth of secrets. In order to optimize transparency and ergonomics, BOVET 1822’s watchmakers decided to fasten the movement in the back rather than inside the middle as is usually the case. They had already successfully experimented with this choice in the construction of the Tourbillon Ottantasei in 2016.

The movement chosen to occupy this three-dimensional panoramic showcase is regulated by the patented double face flying tourbillon, which appeared in BOVET’s 2015 collections. Four years later, the movement has evolved and today features a variable inertia balance for even greater chronometry through the use of a traditional hairspring. Mastery of hairspring production sets BOVET apart, a rarified science mastered by very few watchmakers. This new caliber draws its energy from a single barrel that guarantees 10 days’ power reserve despite numerous animated complications. BOVET 1822 watchmakers’ long-standing expertise in long power reserves — for which they hold the absolute record, with a pocket watch manufactured in 1900 that offers 370 days’ power reserve — is explained by their constant concern to minimize friction at the heart of the movement.

The use of artisanal methods and the care taken with each detail represent the main reasons for this energy control. They summarize the philosophy that drives the Manufacture’s technical office, based on the idea of saving energy rather than adding it, so as to increase the power reserve. The solution to the problem caused by the winding time is provided by the doubly patented spherical differential winding system that halves the number of turns of the crown required to wind the timepiece completely.

Collectors may choose between two types of dials. One is a pronounced blue quartz dome whose transparency allows the collector’s eye to roam unencumbered over the movement’s different layers. In the second dial offered, the beholder will discover transparency in the space between each of the blades of the concave helix.

This dial has been machined from an aluminum block before being decorated by the expert hands of the dial artisans. If so desired, the dial may be decorated with a hand-crafted engraving by the decorative workshop’s engravers. This requires the utmost skill as the blades are narrow and their concave shape pronounced. Several dial colors will be offered for the collector to choose from. Finally, they will also be able to customize their timepiece by selecting a specific helix shape inspired, for example, by the wheel rims of their favorite car.

Timepiece EnquiryObtain exclusive access to rare and highly sought-after timepieces, through our preferred partner specialists and luxury brand partnerships.Make an enquiry
Share
bovet
About me