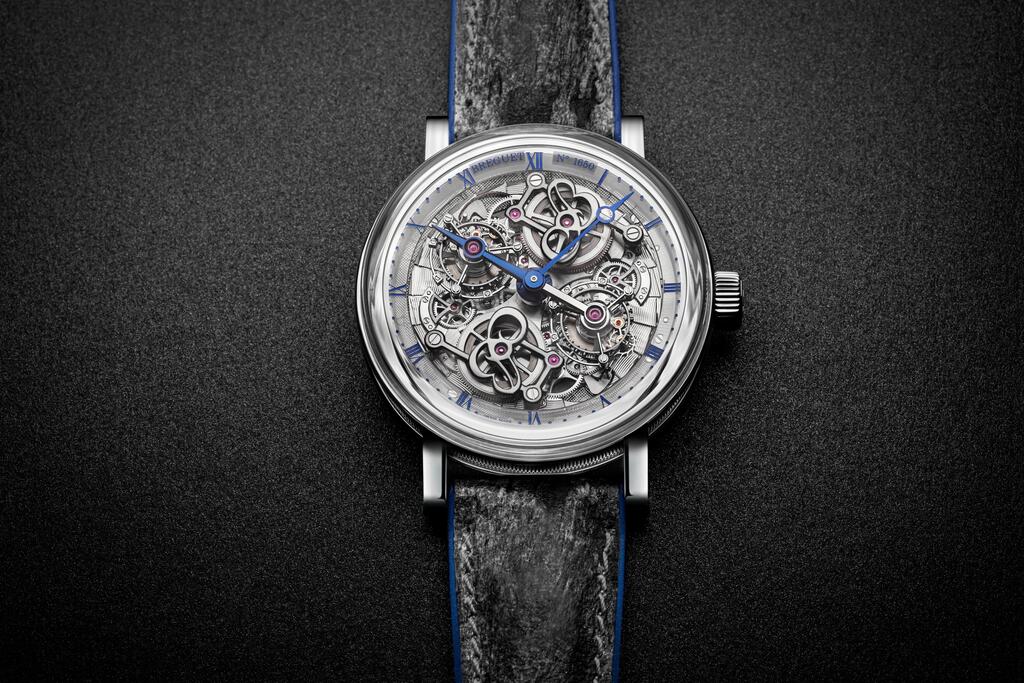 The new Classique Double Tourbillon Quai de l’Horloge model houses a monumental movement in the proportions of a watch. Working with very limited space, the Breguet Manufacture has built a complex and harmonious universe that seemingly defies the laws of physics. Like a delicately chased sculpture, the entire exposed mechanism pivots around its axis at the rate of one full turn every 12 hours.

It is propelled by two independent tourbillons, which each complete a full rotation per minute. In this way, the interconnected regulating organs perform a double revolution, simultaneously driving the tourbillon bar: the signature hours hand. 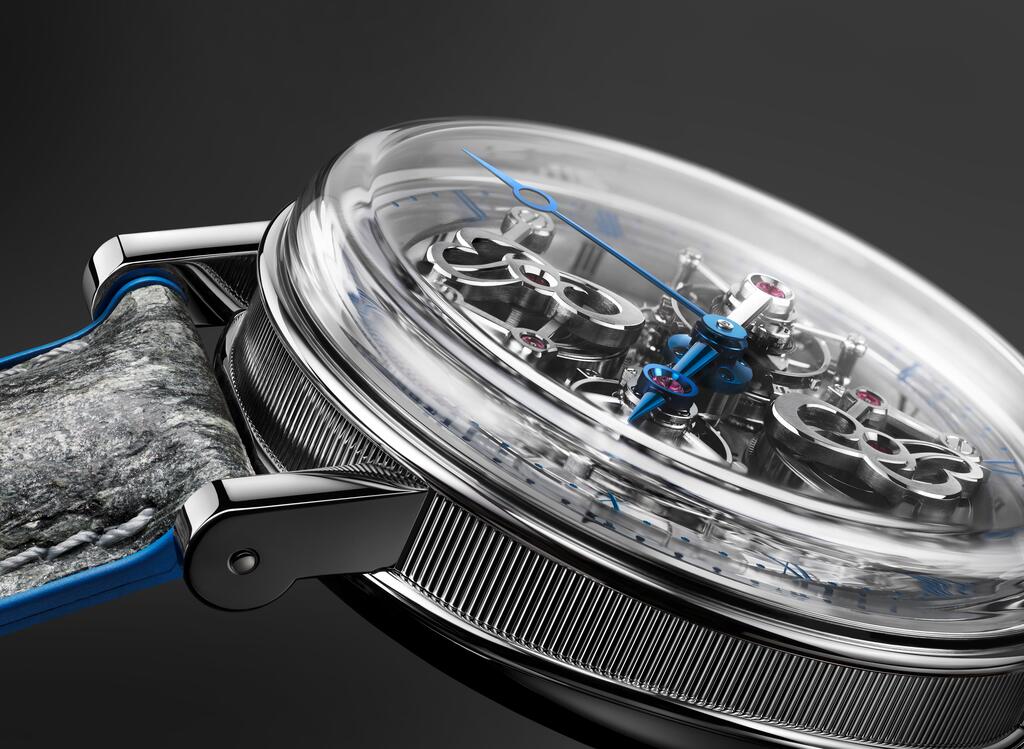 It is a remarkable display, featuring a number of components made of gold, as were those of  grand complication movements back in their day – a tradition that has now been all but lost; one that the House of Breguet endeavors to perpetuate, as it does its specialist artisan techniques. This watch is a stunning display of Breguet’s expert craftsmanship – in particular the engraving on the back, which depicts the house that Abraham-Louis Breguet acquired on Quai de l’Horloge in Paris.

The Invention to Endure throughout the Centuries

Indeed, it was at this inspiring address, nestled between the artisans of the Ile de la Cité, that the master watchmaker invented the mechanism that would become globally renowned and endure throughout the centuries. At a time when timepieces were worn vertically in the waistcoat pocket, Breguet strove to devise a way of negating the effects of Earth’s gravity, which was impacting on the chronometric accuracy of the movement. Then the idea came to him to incorporate the balance wheel and spring as well as the escapement (lever and escape wheel) in a mobile carriage rotating on itself. 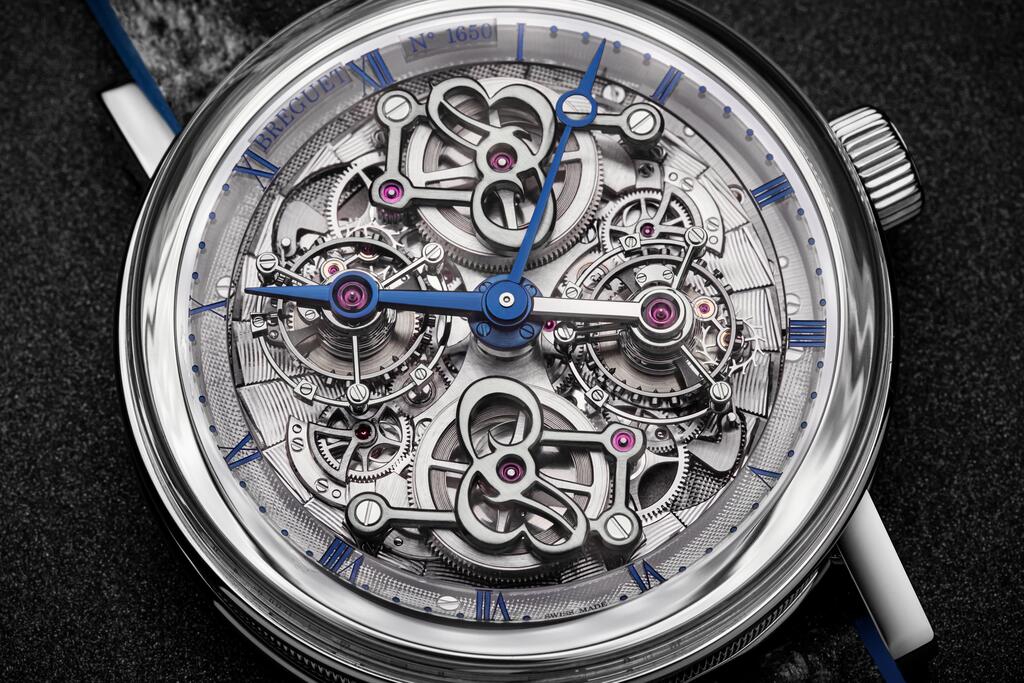 The master devised the name tourbillon for this double rotation of the cage and its parts, in reference to the long-forgotten notion of a planetary system. Genius in principle and captivating in operation, the invention remains the preserve of the House of Breguet, conferring a truly special originality.

The timekeeping parts of this Double Tourbillon 5345 are, incidentally, very similar technically to the original creation. The steel balance springs are endowed with the characteristic terminal curve, allowing for concentric development of the spring. It was a solution devised by the founder himself, which has since become known as the Breguet overcoil.

Even now, the balance spring is still shaped by hand, while the different calibrations are also done manually, such as balancing the tourbillon cages. These carriages are the only ones in the current collection that feature a framework in black-polished steel – the highest degree of finishing in fine horology. 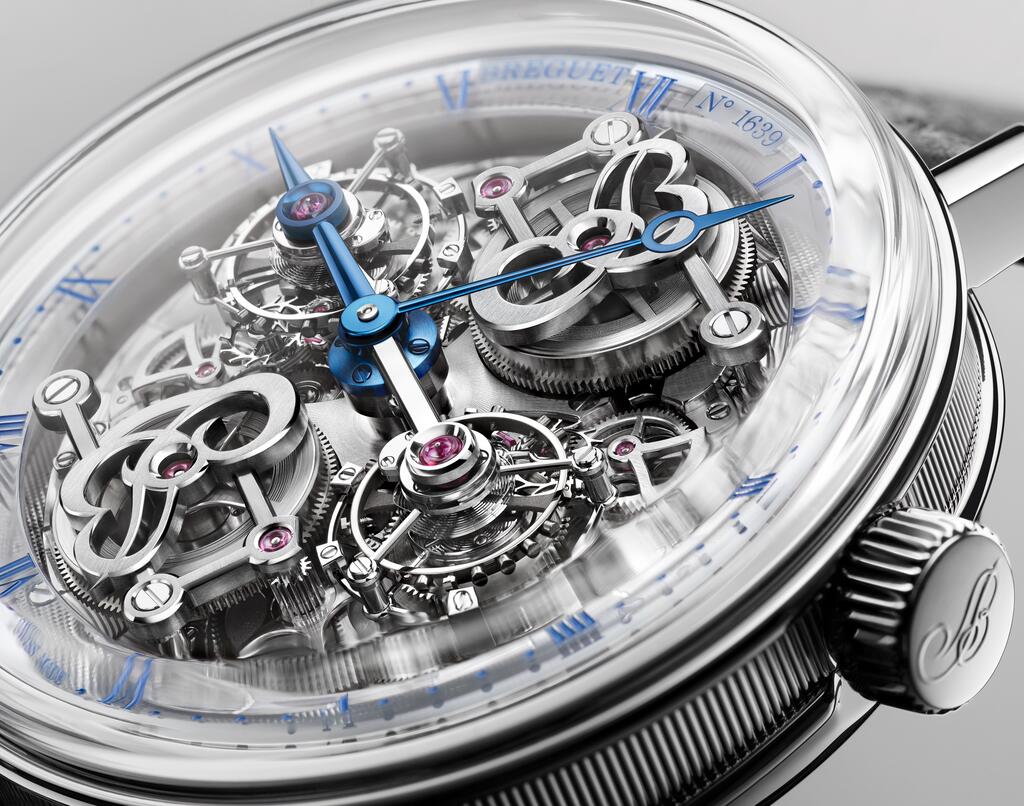 The two mechanical hearts beat independently from one another, each driven by their own barrel. However, the two oscillating organs are coupled with a second pair of wheels, revolving in the central differential. This double-entry mechanism is able to determine the average rate of the tourbillons, allowing for the oscillating plate to be set in motion at the  rate of one full rotation every 12 hours. As for the minutes indication, it is a classic hand in the center. The entire mechanism is equipped with a system to minimize play in the wheels, ensuring a perfectly precise display.

This spectacular staging makes this caliber one of the most complex systems ever developed by the Breguet Manufacture. Its mobile nature, for example, forced the engineers to entirely review the manual winding mechanism, which now relies on independent wheel trains. One of the two barrels is equipped with a friction bridle, similar to those used on self-winding watches. This astute construction allows the spring to disengage once coiled, until the second barrel is fully wound. Lastly, the crown employs a dynamometric security system, which prevents excessive winding of the springs.

The expertise of the art of watchmaking is never without aesthetic virtuosity at Breguet. Presented for the first time in 2006, the Double Tourbillon is now liberated from the dial, revealing itself in all of its mechanical beauty. Stylised and rounded, the barrel bridges in steel take on the form of the letter B. All the components are meticulously straight-grained, chamfered, and even satin-brushed by hand. 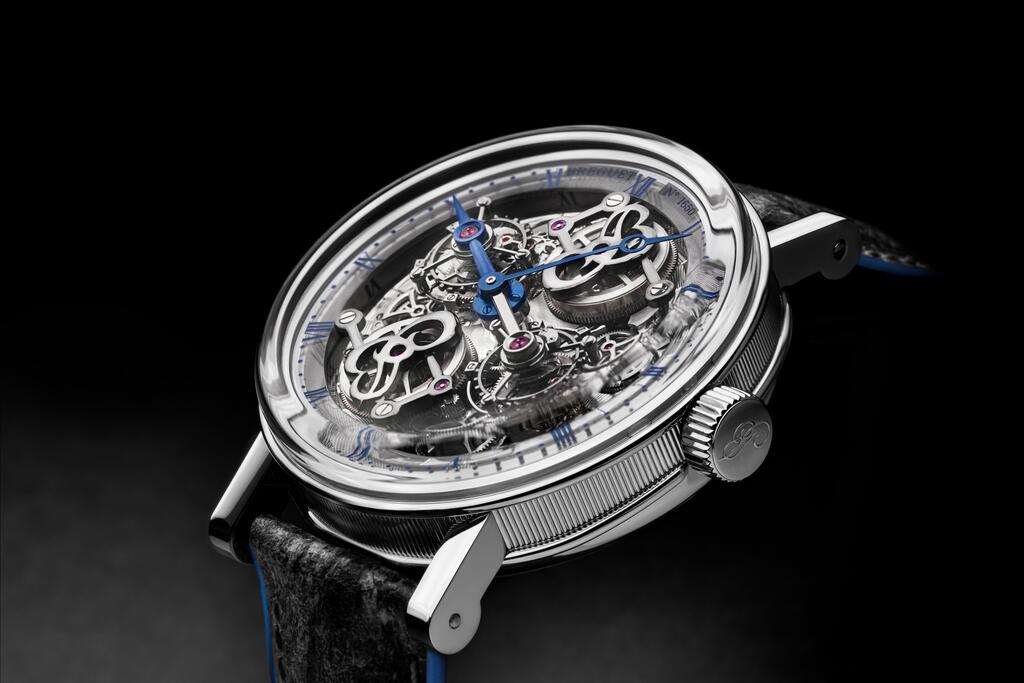 A true signature of the House, the hand-engraving on a rose engine (guilloché work) finds a new field of expression on the movement, replacing the traditional circular graining. Laid bare as it is, the caliber exposes the inner flank of the caseband, from which the hand-engraved Roman numerals stand out echoing in their design those of the sapphire hours chapter.

Yet the unique character of this timepiece is fully revealed on its back. The treasures of mechanical ingenuity assembled for the movement leave in their wake timeless poetry. The timepiece is completed with an engraving, crafted by the artisans of the Manufacture, featuring the facade of the building occupied by Abraham-Louis Breguet from 1775 onward, at 39 Quai de l’Horloge, Paris. Etched into gold, the work abounds in such meticulous detail that through the windowpanes a glimpse may be caught of the wheels of the caliber. A window into two worlds of true excellence.

Timepiece EnquiryThrough our preferred partner network, we assist our discerning audience and members in obtaining access to rare and highly sought-after timepieces.Make an enquiry
Share
Breguet
About me