This year marks the 15th anniversary of Romain Gauthier. It is fitting, then, that the Swiss watchmaker’s latest creation, Insight Micro-Rotor Squelette, calls on an area of craftsmanship for which he and his team have been heralded since the birth of the brand in 2005: hand-finishing.

By opening up and stripping down his high-end, time-only automatic calibre, Romain has created a truly contemporary skeleton watch that is a technical and artistic tour de force. Not only do the skeletonised, ultra-light natural titanium bridges and mainplate help to reveal the mesmerising mechanics of the in-house movement, they also provide the perfect platform for the Romain Gauthier anglage specialists to demonstrate their immense skills. For each Insight Micro-Rotor Squelette movement features as many as 250 hours devoted to anglage alone, that’s to say the bevelling, softening, smoothing and polishing by hand of the bridges and mainplate, in an extraordinary demonstration of watchmaking artistry. 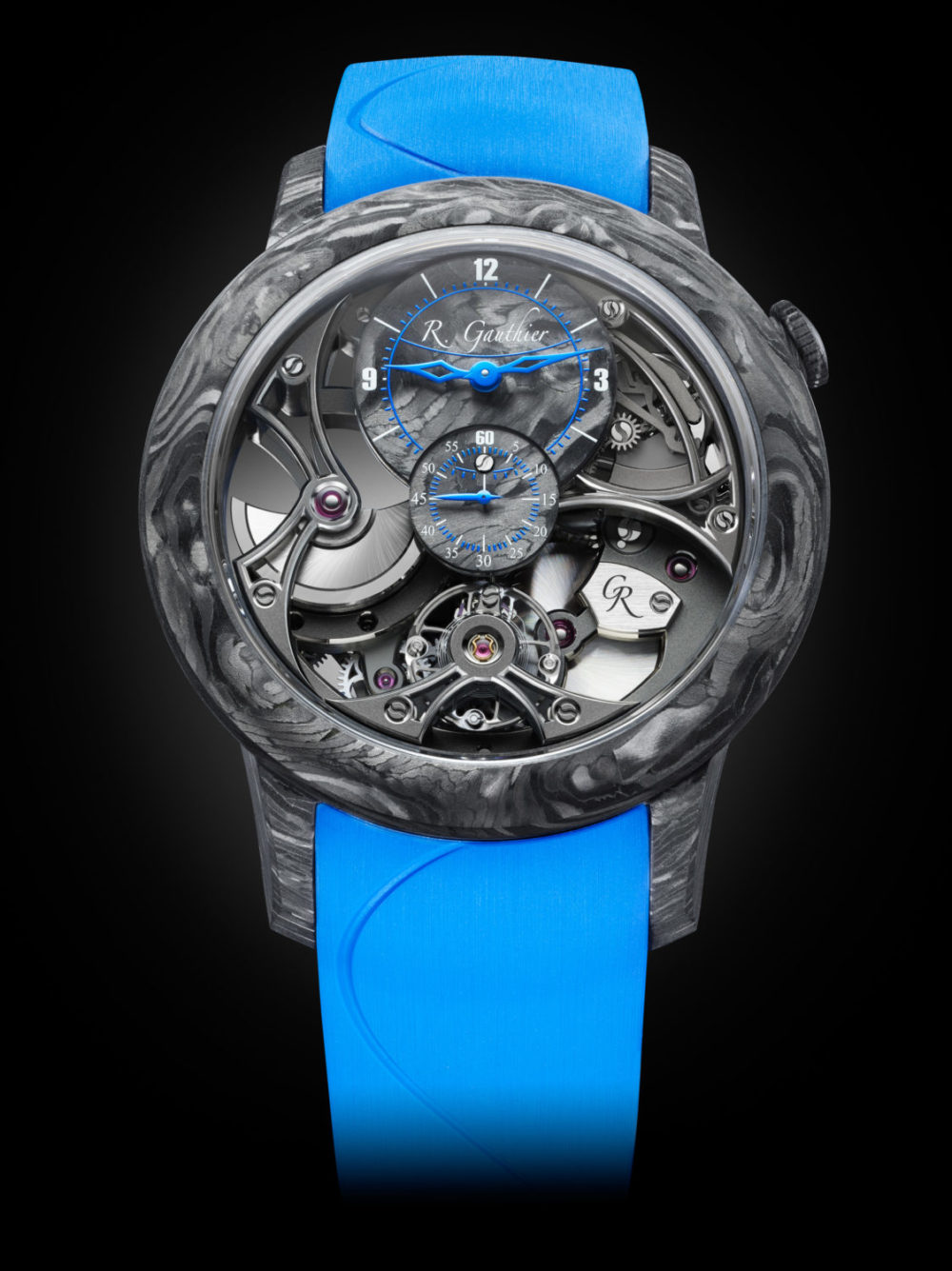 Insight Micro-Rotor Squelette is available in a 42mm case made out of Carbonium®, a cutting-edge carbon composite sourced from aerospace-grade fibres that is light, mechanically resistant and catches the eye with its dynamic veining. This is a customisable “Manufacture Only” edition available exclusively via Manufacture Romain Gauthier. Insight Micro-Rotor Squelette is also available as customisable 39.5mm precious metal or titanium “Special Orders” through Romain Gauthier or its retail partners. To show the mouthwatering possibilities, Romain has created two Special Order examples, one in 18k red gold and another in 950 platinum.

Romain Gauthier always knew that if he was ever going to create a timepiece that collectors could purchase exclusively through Manufacture Romain Gauthier, it needed to be something special with a strong identity. And so, for his first ever Manufacture-Only edition, Romain has chosen to present probably his sportiest looking watch to date: An Insight Micro-Rotor Squelette with case, crown, dial and buckle made out of Carbonium®. 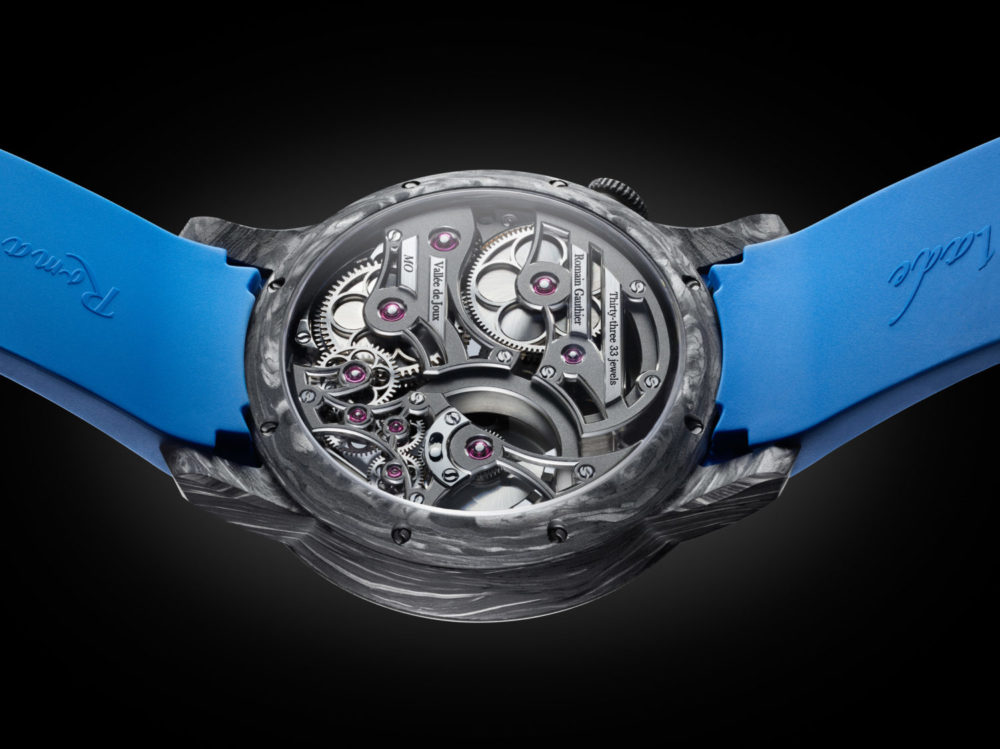 Carbonium® is a high-tech, high-performance, carbon fibre composite invented and produced by French company Lavoisier Composites. It is made by employing a special compression-moulding process to ‘upcycle’ the epoxy resin and carbon fibres found in prepreg tapes sourced from the aerospace industry – fibres once earmarked to form part of an airliner wing, fin or fuselage.

Romain says: “I have been interested in presenting a watch in carbon fibre for some time, but I was always waiting to find the right material, one that is a bona fide, technical carbon composite. I found that material in Carbonium®. I was drawn to Carbonium® because not only does it possess excellent mechanical properties, but it also looks fabulous and wears light on the wrist.” 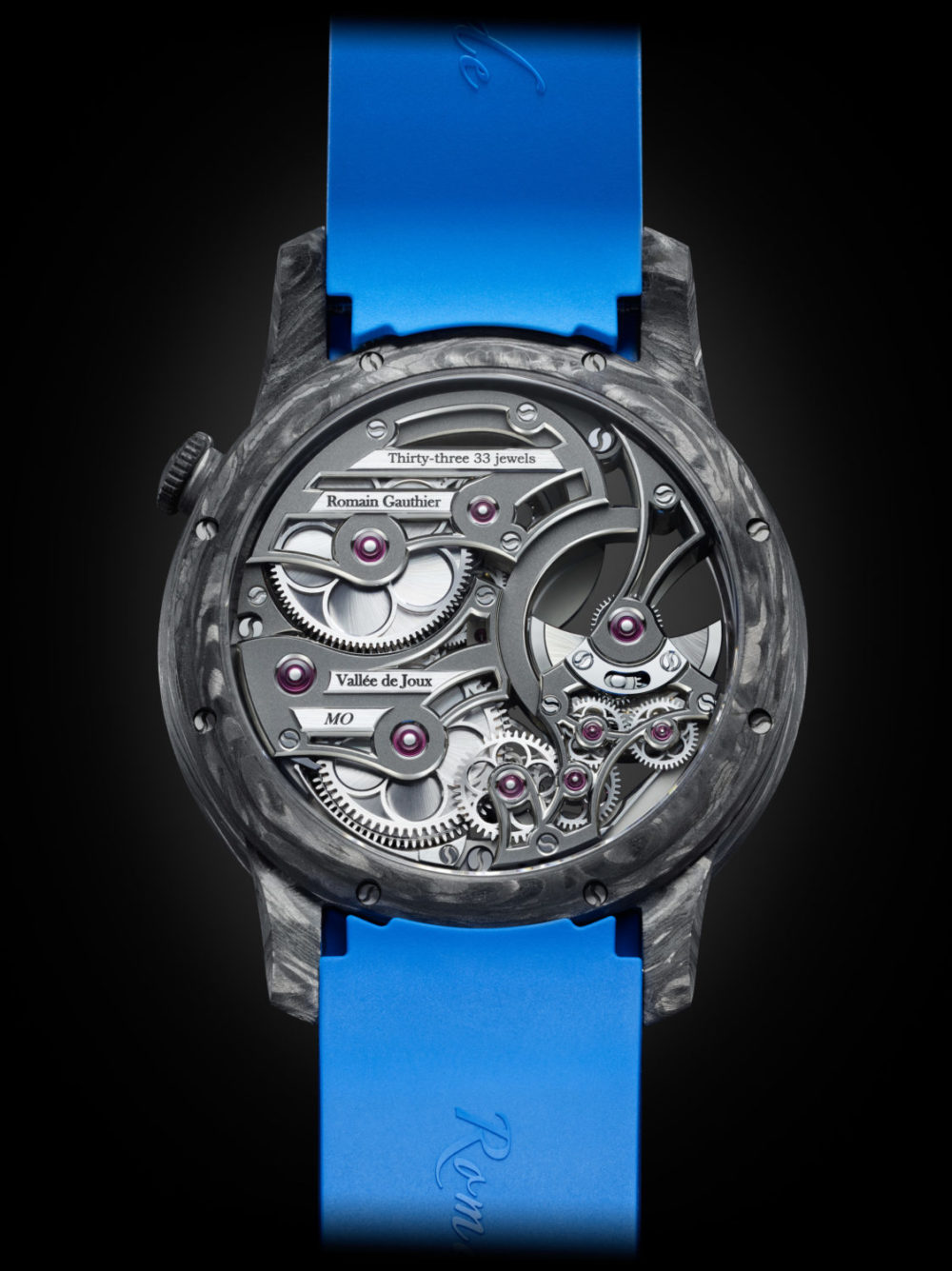 To make each of the Carbonium® elements for this timepiece, Lavoisier Composites creates Carbonium® blocks which are then finely shaped on a 5-axis machining centre before being matte-finished for a slightly silky surface appearance. In accordance with Romain’s wishes, Lavoisier chose a long fibre length of 50mm, in their eyes the sweet spot between mouldability, aesthetics and mechanical properties.

Indeed, the carbon fibre in Carbonium® is three times more rigid than titanium, yet twice as light. The fully assembled Carbonium® case for Insight Micro-Rotor Squelette weighs in at just 15.36g. So with the cased-up movement weighing 31.31g, it is fair to say this Carbonium® edition feels like a feather on the wrist. What is more, at 42mm in diameter, this case is larger than the Insight Micro-Rotor case in precious metal or titanium (39.5mm). That is because the rigid and fibre-rich nature of Carbonium® means localised increases in case dimensions needed to be made in order to machine it optimally. The extra couple of millimetres only serve to increase the assertive presence of the Carbonium® which bears a striking, organic-looking, veined pattern. As you turn the watch, the veins take it in turns to reflect the light, lending the case a real vivacity.

With carbon fibre watches, often the movement is placed in a watertight cylinder within an unwaterproofed case. Romain was keen to avoid this ‘hack’ and instead wanted the skeletonised movement to be protected from humidity by the Carbonium® case itself. To that end, Lavoisier Composites performed a multi-step waterproofing process developed especially for this Romain Gauthier case, that saw resin injected into the micropores – invisible to the naked eye – on the inside of the case to prevent water from entering it. 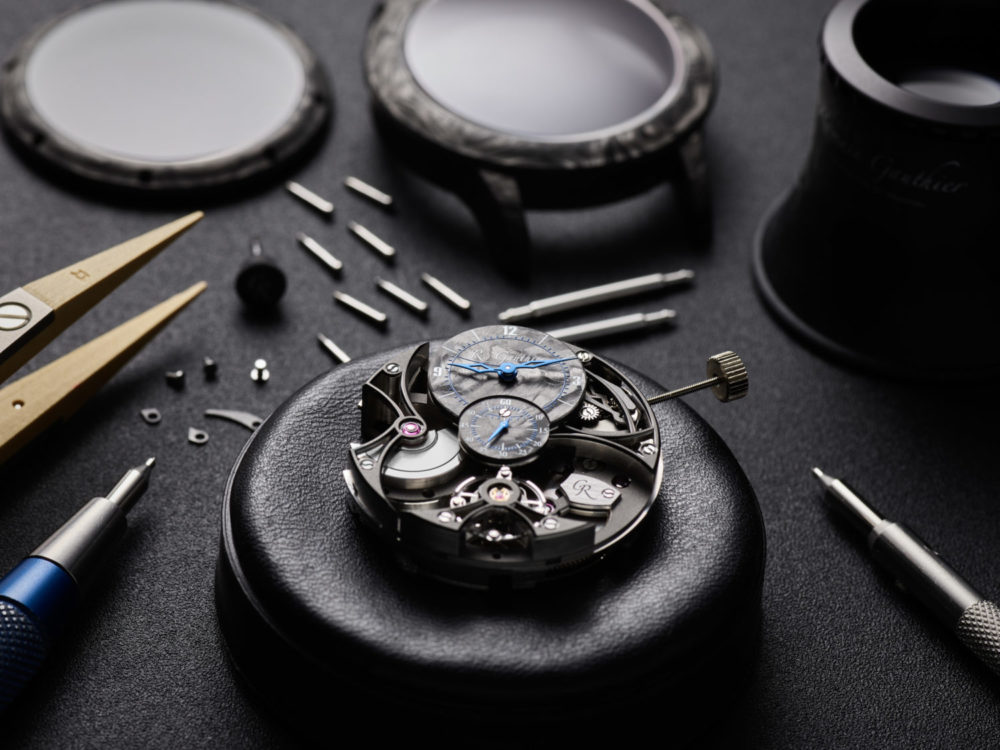 As for the “Manufacture Only” status of this edition, Romain Gauthier feels that this will enhance its appeal to collectors. “Purchasing this timepiece directly from us, our collectors will know that they are acquiring an exciting timepiece that they won’t find anywhere else,” says Romain. “Those who own it will, in a sense, become part of a club of owners who understand how this watch represents me in terms of the architectural movement, the extreme level of hand-finishing and the technical-yet-casual nature of the Carbonium® case. And they will know that they will have made a considerable contribution to supporting our watchmaking.”

Customisable elements include the final finishing to the bridges and mainplate (hand-polished or matte-finished bevels); colour of the steel hands, dial accents and plaquette engravings; and colour of the natural rubber strap. The example here features hand-polished bevels, Pacific blue and white dial accents, and Pacific blue steel hands and natural rubber strap.

Timepiece EnquiryThrough our preferred partner network, we assist our discerning audience and members in obtaining access to rare and highly sought-after timepieces.Make an enquiry
Share
Romain GauthierSkeleton Watch
About me