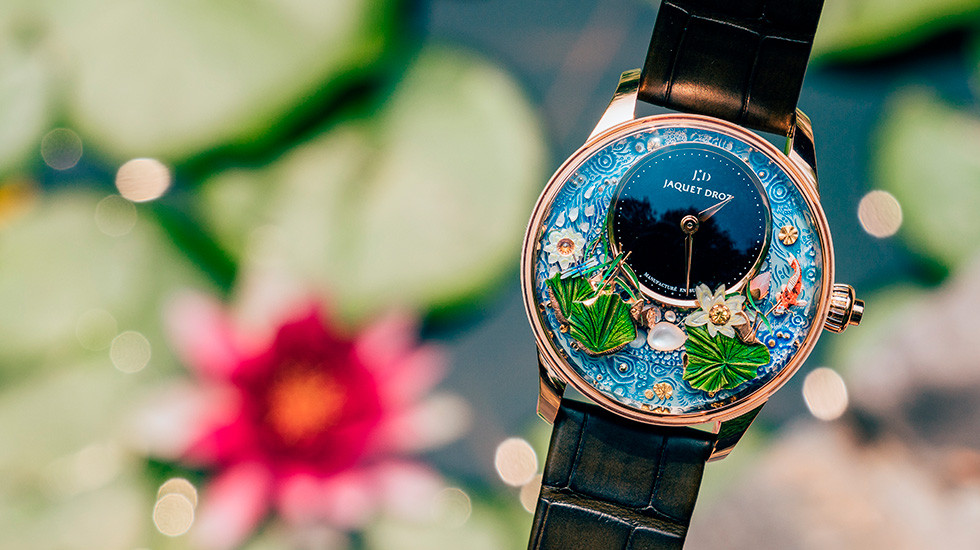 As early as the Qing Dynasty in China, Jaquet Droz’s original aesthetics and exquisite craftsmanship were favored by Emperor Qianlong himself, high officials and noble lords. Jaquet Droz has sold more than 600 pieces of products to China in 10 years and has become the first watch brand imported to China. At present, the Imperial Palace Museum still carefully collects several pieces of Jaquet Droz automata and timepieces.

This time, Jaquet Droz comes to Beijing with new timepieces, which once again continues the deep relationship between the brand and China. Jaquet Droz ingeniously presents the oriental elements such as Lotus and koi in the Magic Lotus Automaton series with utterly exceptional animations, making the Western timepiece craft and the oriental aesthetics collide, adding an extraordinary meaning to the Jaquet Droz China trip. 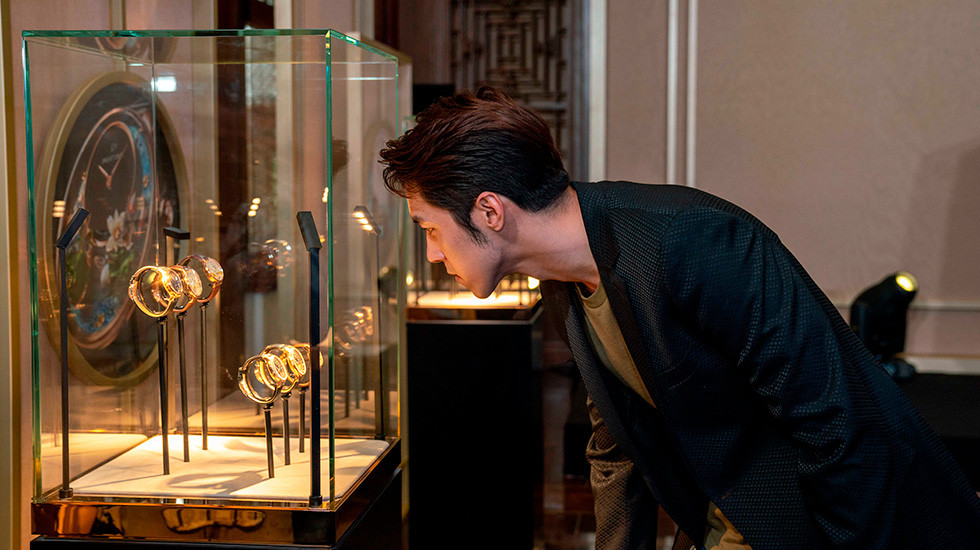 Every Move Blooms Louts, Strolling in the Zen Garden

In order to enable the guests to feel the elegant artistic conception of Oriental aesthetics, the event was sited in a quadrangle adjacent to the Royal Garden Summer Palace. This centuries-old building is featured with antique beauty and Chinese aesthetics. The guests slowly stroll forward, step by step nostalgically, as if they are staying in a paradise. In the clear spring of the quadrangle, where the koi swims and the lotus blossoms, the immersive experience enables the guests intoxicating with the aesthetic mood of Zen garden.

The pure and elegant Lotus flower is praised by the Chinese as one of the gentlemen in flowers. ‘Grown from sludge but unstained, posing elegantly without being flirtatious.’, since this renowned sentence from ‘Lotus Love’ prose created by Zhou Dunyi from North Song Dynasty, the Lotus has been given the quality of noble and dashing. The freely-swimming-Koi has been loved by wealthy people since ancient times for its longevity and rich ornamental value, and it implies the meaning of longevity and auspiciousness.

Therefore, laying wonderful wishes on the smart Koi has been very popular in China since long ago. This time Jaquet Droz vividly presented the Magic Lotus Automaton with an exceptionally oriental-beauty-animation, implying the praise of the continuous movement through the four seasons and the eternal cycle of life in the oriental faith. 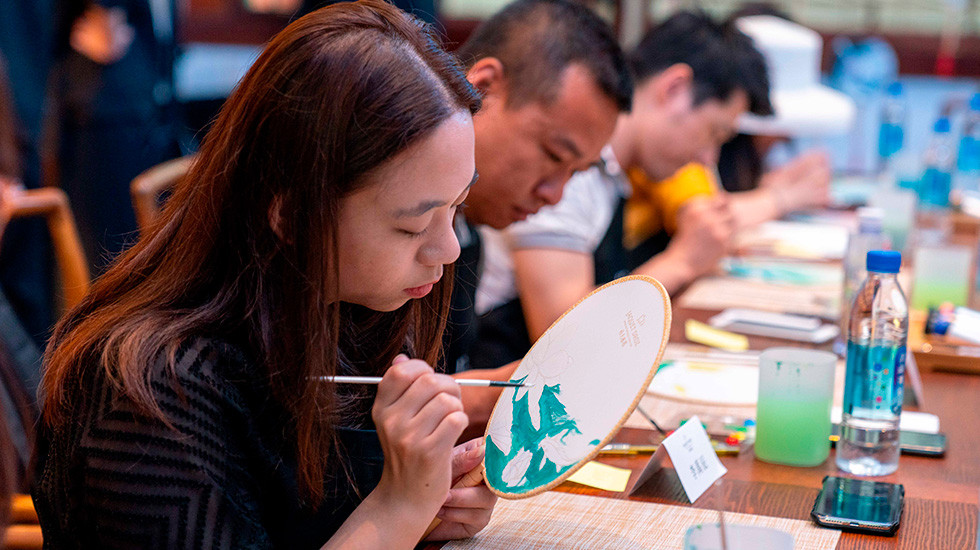 The Magic Lotus Automaton houses the following utterly exceptional animations: the Lotus flower fallen onto the water represents the bleak autumn, floating along the rippling waves. Each time when the Lotus passes beneath the dial or leaves, it acquires a new stone. The color of the lotus heart changes, invisibly, four times for every rotation around the river. The hand-carved and color-dyed Koi can dive beneath the Lotus leaves and while it flaps the tails, creating the illusion that it is swimming through the water. When the power reserve is empty, the dragonfly resets on a Lotus leaf, ready to soar once again in a perpetual cycle of new beginning.

This magnificent naturalist fresco incorporates several Jaquet Droz’s microscale or complex decorative techniques including the Grand Feu Enamel, engravings, automaton and so on. This new automaton is the subject of four patents pending. It features the most sophisticated dial ever produced by Jaquet Droz. The movement contains more than 500 components. The development phase alone took over three years.

As a result, the Magic Lotus Automaton can present on demand an animation lasting more than four minutes, with eight full rotations of 30 seconds each. Turning over the timepiece, the bridges and oscillating weight are hand-engraved with exclusive naturalist motifs, with Koi and Lotus flowers echoing the carvings on the dial side. 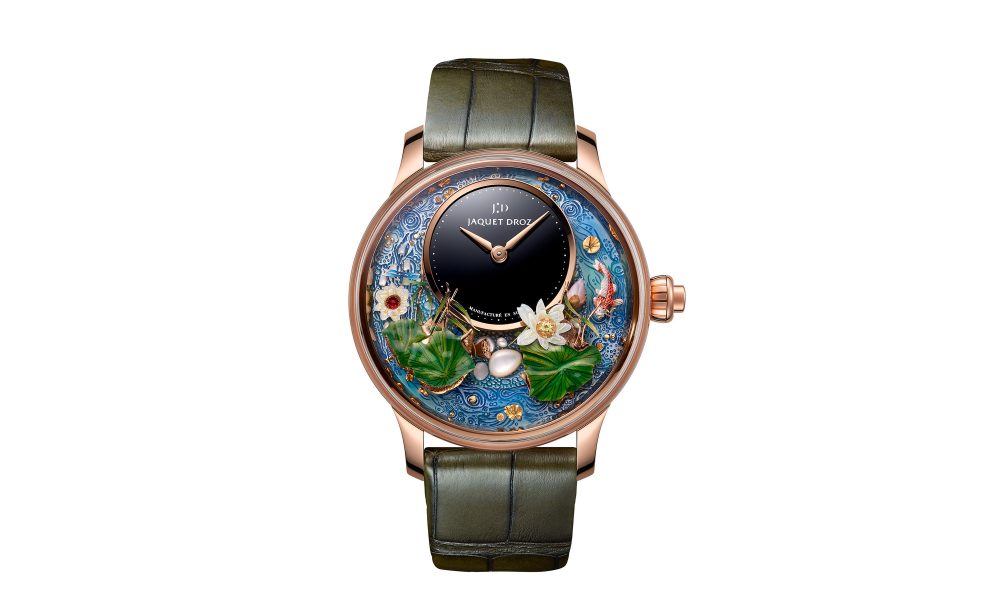 Every timepiece created by Jaquet Droz is a crystallization of pure craftsmanship and extraordinary professional skills, all with their own unique stories to tell. Up to today, the brand has always been true to the craftsman spirit of its founder by continuing the persistent pursuit of breakthrough innovation and crafts heritage, and will continue to write the glorious history of Jaquet Droz.