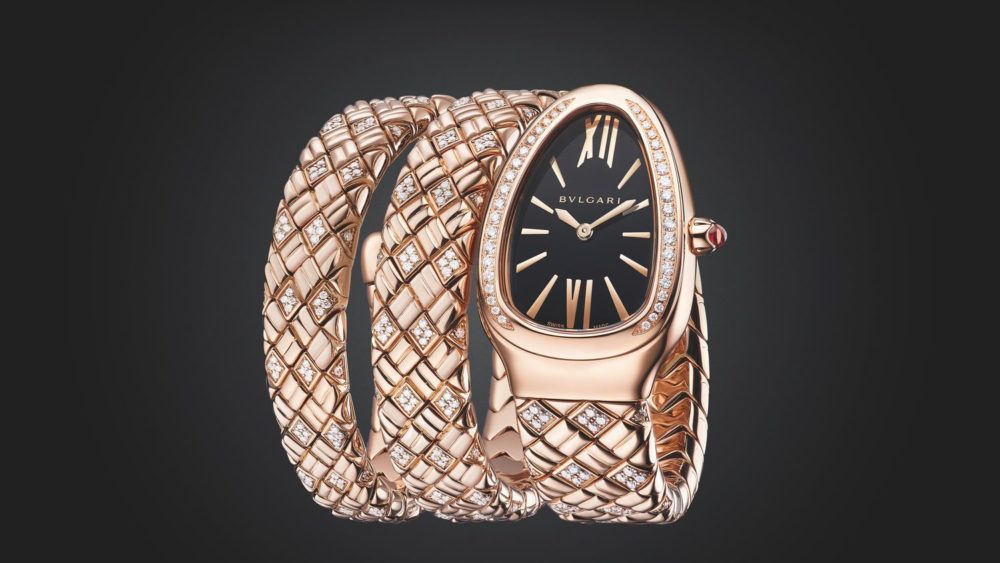 A symbol of perpetual renewal, Serpenti, the captivating snake, is one of Bulgari’s most enduring motifs. And in the world of Bulgari watches, Serpenti’s iconic wrapping bracelet watches represent the ultimate synthesis of jewelry craftsmanship — timepieces that are jewels in every facet of their creation.

As the latest wrapping bracelet watch in a saga that began with Serpenti Scaglie in 2009 and continued with Serpenti Tubogas in 2010 and the original Serpenti Spiga designs from 2014, the three new Serpenti Spiga editions represent an evolution of the Serpenti style. Crafted in exquisite gold and diamond and featuring an intricate matelassé pattern, they represent Bulgari’s unique ability to redraw the boundaries of creativity, refinement and expertise. 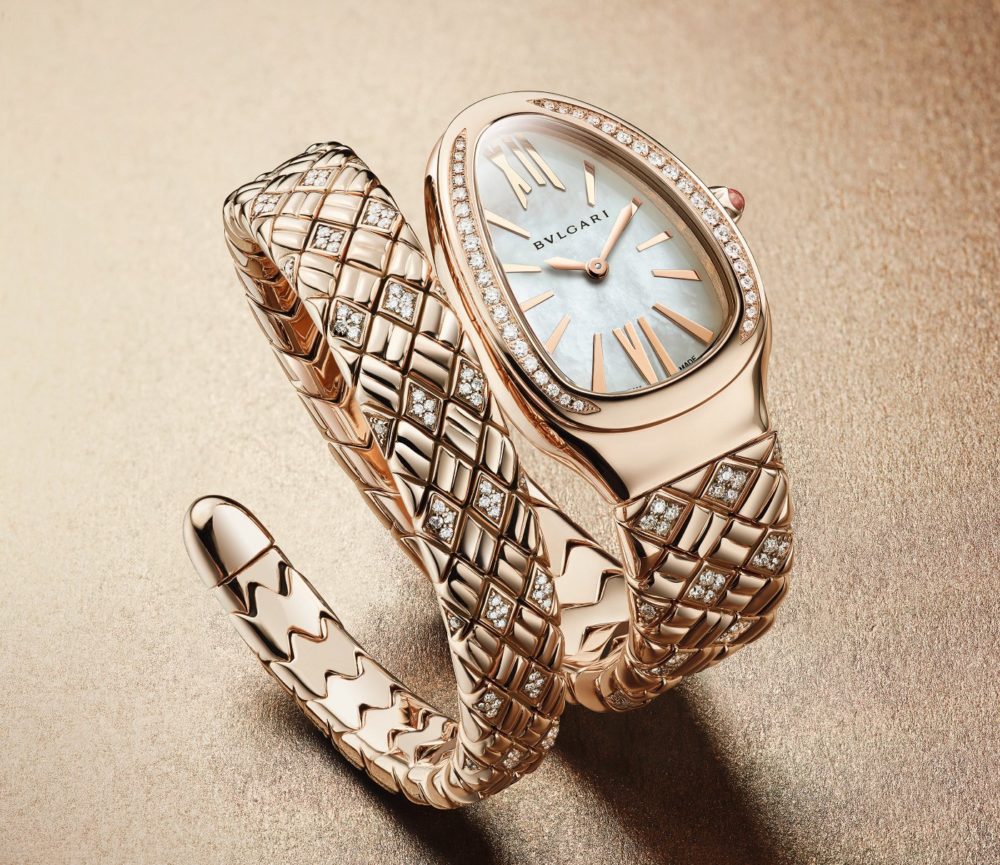 Taking inspiration from a heritage timepiece from 1957 with a square-shaped face and dial and a modular construction bracelet wrapping around the wrist, this latest Serpenti interpretation joins the family as a masterpiece of craftsmanship, boldly epitomising what a jewellery-watch can be. As the new face of Serpenti, the design of these innovative snakes entwines the chic matelassé pattern with jewellery-making artistry and intrinsic wearability, for a look that is rich with Serpenti seduction.

The first Serpenti Spiga watches made their debut in 2014. Rooted in Bulgari’s illustrious heritage, and first brought to life in Bulgari jewels with the successful Spiga modular line in the 1990s, the Spiga pattern took shape in a new collection of Serpenti watches, named for the Italian word for “wheat”, which the motif resembles. Its characteristic module was indeed inspired by a stalk of wheat, a symbol of fertility and prosperity that has captivated throughout mythology and antiquity, and a theme that was often linked to marriage in ancient Rome and Greece. 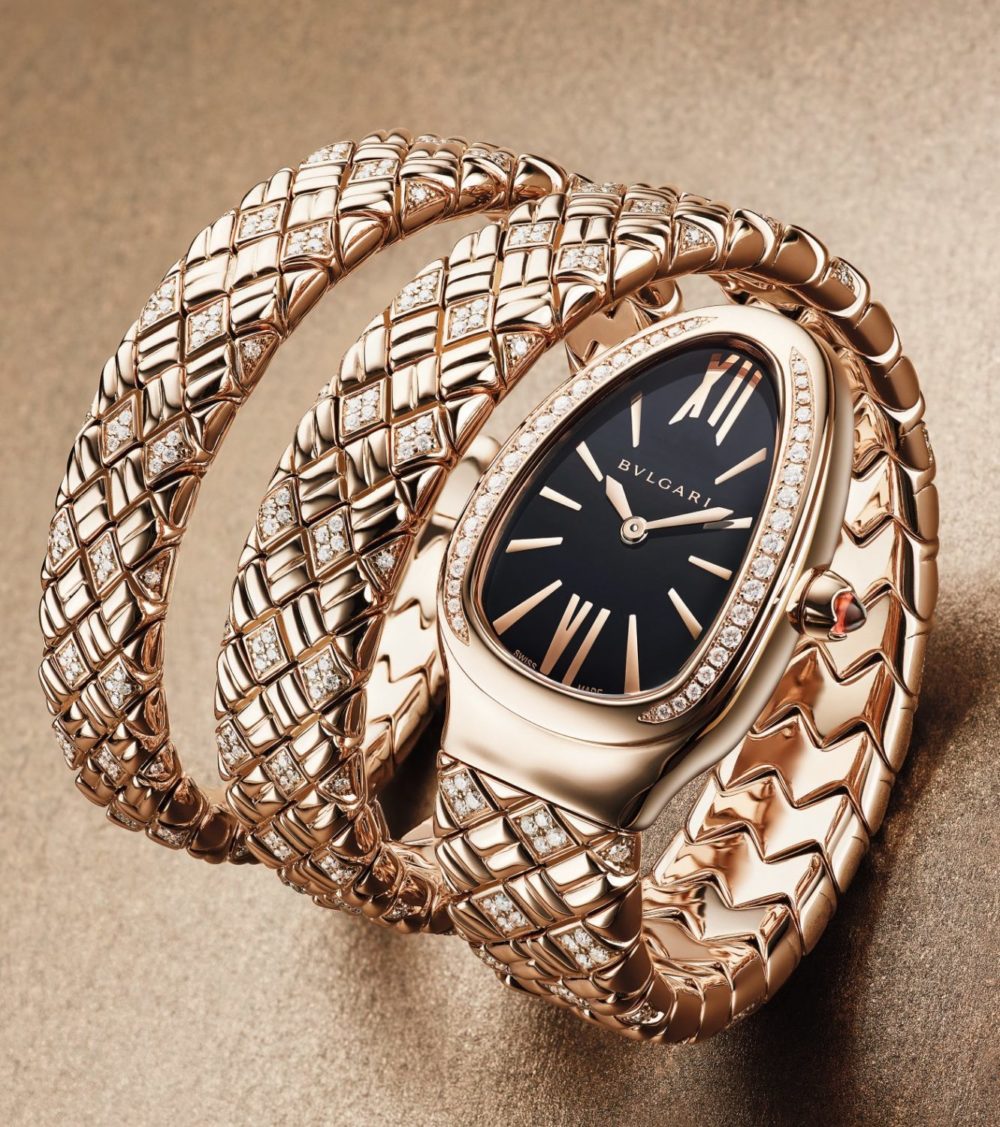 A touchstone of Bulgari jewellery design since the 1980s, the repeating pattern format has been used in myriad collections, from 1980s High Jewellery icon Parentesi and Spiga collections to Alveare and Trika. The popularity of the modular technique is multi-faceted: each module is well-defined and free from ornamentation so that it can be easily reproduced and combined to form a variety of designs. The modules are assembled piece by piece, which is essential to maintaining the flexibility and integrity of the design.

Now, the three Serpenti Spiga novelties collide that sensibility with Bulgari’s jewellery-making expertise, for an impeccable reimagining of the line in brilliant diamonds and precious rose or white gold, according to the models. With its refined and contemporary matelassé pattern and modular construction technique, it represents another expression of a Bulgari style that would come to characterize the Maison’s watches and jewels. Production of the Serpenti Spiga watches entails skilled manual labor. 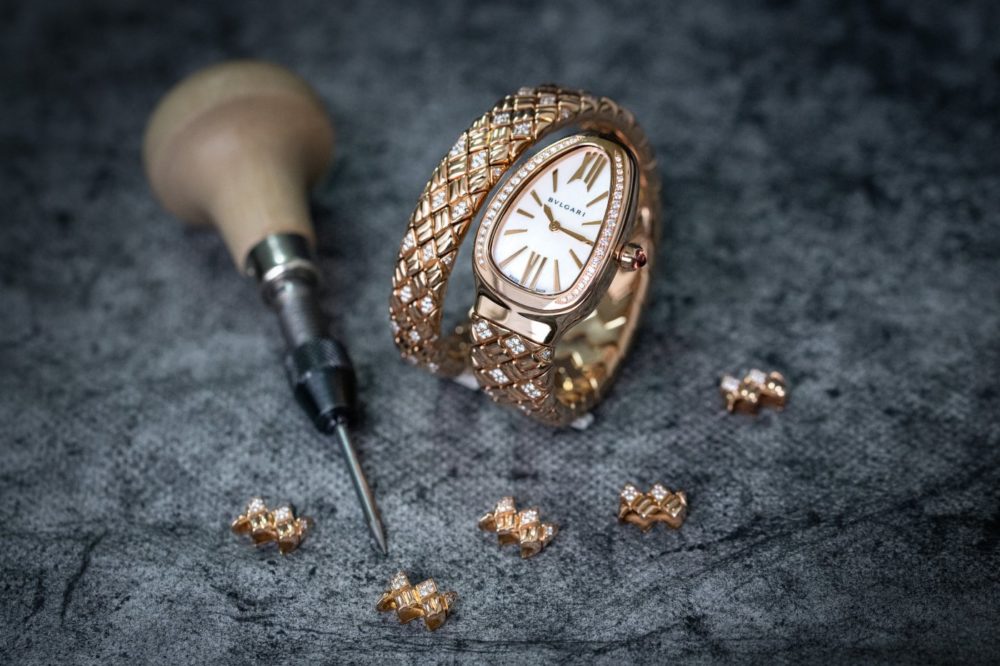 Though each single modular element is cast and produced in series, it is always finished and meticulously assembled by hand. Each individual piece is a triumph of focused artistry, executed with passion and skill: the two-row bracelets comprise 70 different elements, while the single-row watches comprise 40 links cast from 40 different moulds.

The process requires hours of skilled craftsmanship and consists of inserting the modular elements around an internal flexible spring. The gold links interlock seamlessly, requiring no soldering, creating a flexible band that is then shaped into bracelet watches, which fit perfectly and comfortably around the arm. A brilliant all-diamond High Jewellery interpretation, elegantly adorned with more than 800 diamonds and a cabochon-cut blue sapphire on the crown, completes the collection. 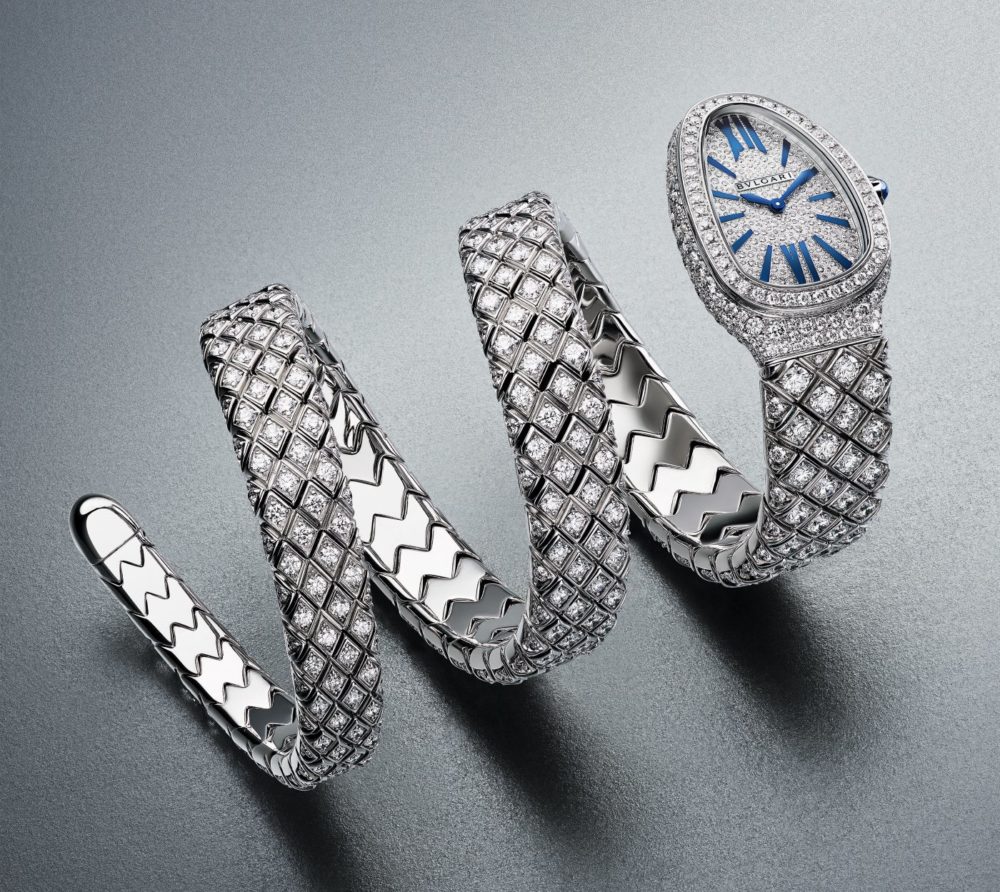 Once again, Serpenti wraps its wearer in a sensual embrace. It is a style that keeps secrets, dominates the day and shines at night. The unexpected metamorphosis of Serpenti watches never ceases to amaze with its outstanding power of rejuvenation. And yet the serpent remains true to itself no matter what form it takes, authentic and unmistakable through every transformation.

Timepiece EnquiryObtain exclusive access to rare and highly sought-after timepieces, through our preferred partner specialists and luxury brand partnerships
Make an enquiry
Share
BulgariTimepiece
About me