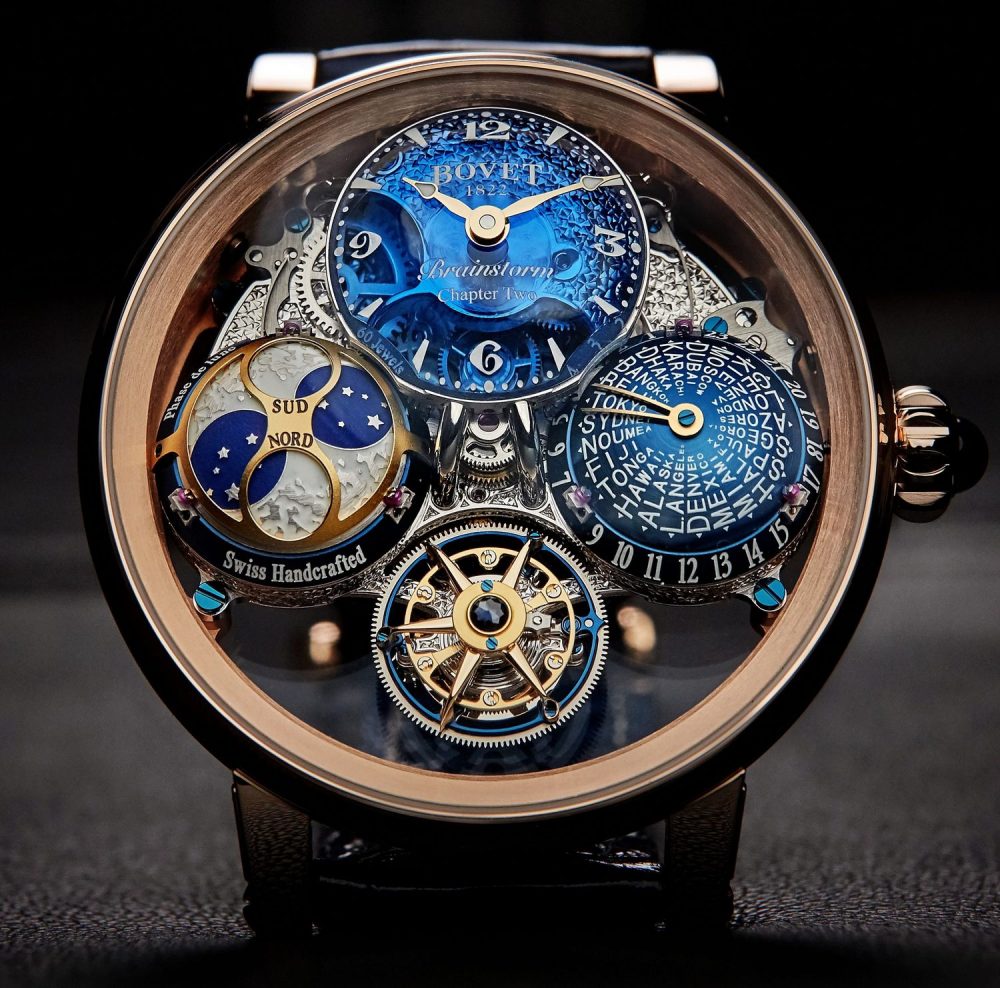 The original Récital 26 Brainstorm Chapter Two in a full sapphire crystal case was introduced and received the GPHG’s Mechanical Exception Award in 2020, the highest accolade in watchmaking. This year, the House of Bovet 1822 offers this spectacular timepiece with the iconic “writing slope” case in solid 18K red gold. 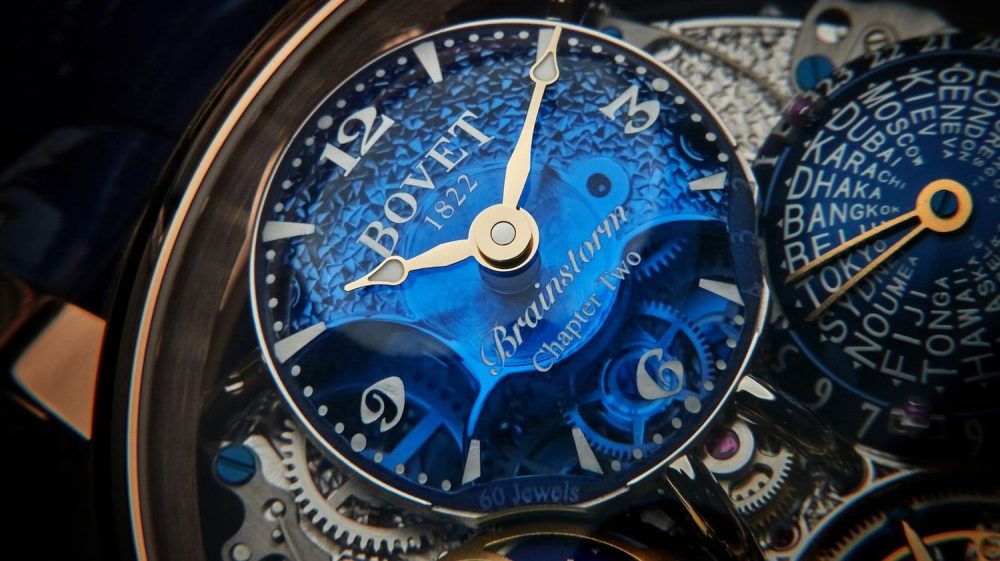 Throughout its history from 1822 until today, the House of Bovet is proud to give decorative arts, chronometry, mechanical ingenuity, and innovation their due. The dedication and passion of Bovet’s craftsmen, their respect for the tradition of Haute Horology, and the care they take in the smallest of details are the reason for Bovet’s exceptional high-end watchmaking.

To further increase this level of exception, Mr. Pascal Raffy, a passionate watch collector and the owner of Bovet, creates all of its own components in the Bovet’s Swiss workshops, using artisanal processes, and adding the concept of exclusivity to the experience offered to each collector. 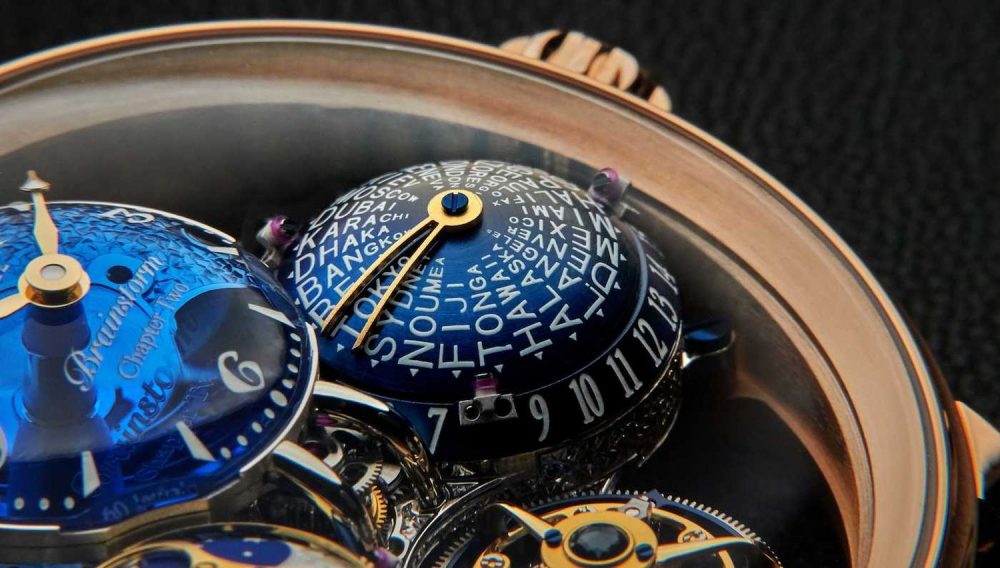 The Brainstorm Chapter Two uses the emblematic writing slope case with an asymmetrical profile imagined by Mr. Raffy in 2016. The slope of its case and sapphire crystal allows the collector to view clearly and appreciate the display mechanisms that guarantee intuitive and increased readability. Concentric rollers, rotating domes, and three-dimensional hands are being used to express time in new ways. The patent-protected design of this unique case opens up new horizons in terms of the architecture of the movements, by optimizing the volume which simultaneously increases the functionalities offered, the chronometry, the reliability, and the readability.

The new caliber developed for the Brainstorm Chapter Two is entirely manufactured in the Bovet 1822 workshops. Perfect for a multi-time zone timepiece, Bovet control of the energy guarantees five days of power reserve with only a single barrel, with a frequency of 21,600 v/h for spectacular chronometry enhanced by the patented double-sided flying tourbillon. 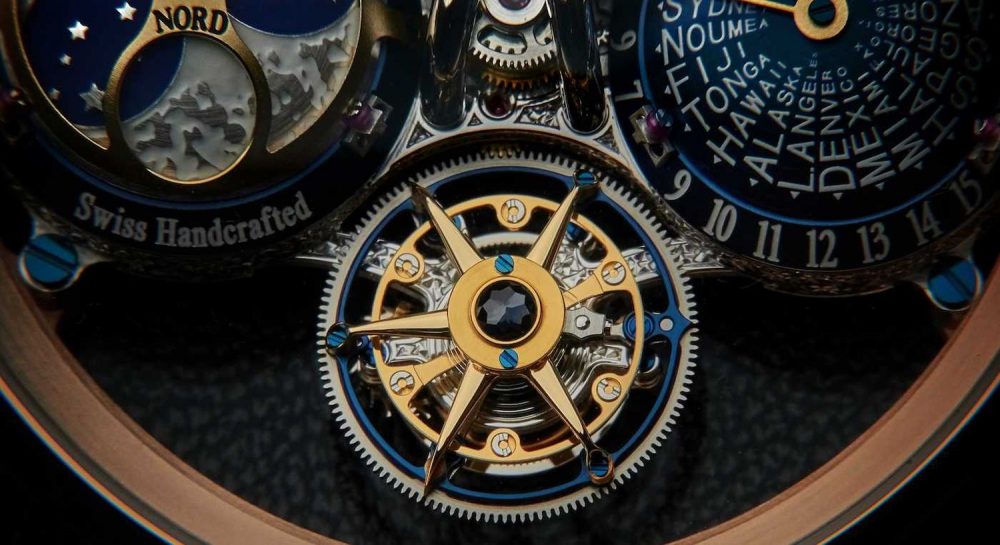 A domed dial, available in a choice of colors (blue quartz, green quartz, blue aventurine, and bespoke options), displays the hours and minutes of local time in the upper part of the case. The seconds are read by an index fixed on the tourbillon itself, placed at 6 o’clock which makes a complete revolution, in 60 seconds. Finally, two rotating domes placed, respectively, at 3 o’clock and 9 o’clock harmoniously complete the design.

The dome located at 3 o’clock displays a second time zone specifically developed for this timepiece and patented by the House. The names of the cities representing the 24 time zones are printed on the dome which makes a complete revolution in 24 hours. A three-dimensional V-shaped hand allows the collector to select the displayed time zone. 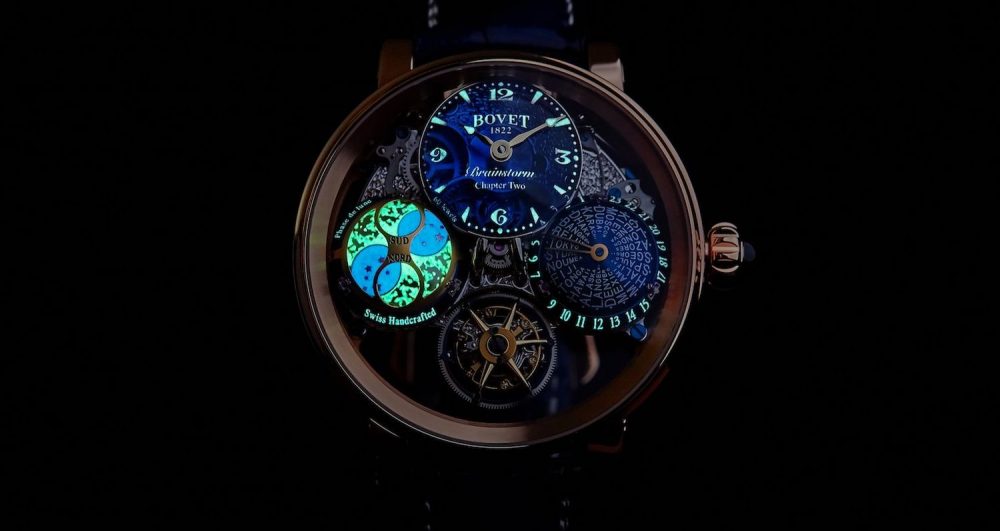 This clever and innovative combination, united with the dome, allows optimal readability, despite the reduced diameter of the entire display. In addition to a second time zone display, this new display also offers the world time function, which allows the time in each of the 24 time zones to be read simultaneously, an intuitive indication that has never found a better justification than at this time of constant connectivity.

In perfect symmetry, the moon phase indicator is positioned at 9 o’clock and is also accomplished with a rotating dome. The lunar surface is engraved by hand before luminescent material is applied, also, by hand. The two circular windows on top of the dome make it possible to read the age of the moon in the northern hemisphere or the southern hemisphere of the earth. The precision mechanism that drives this dome gives it an accuracy that requires a correction of one day every 127 years. 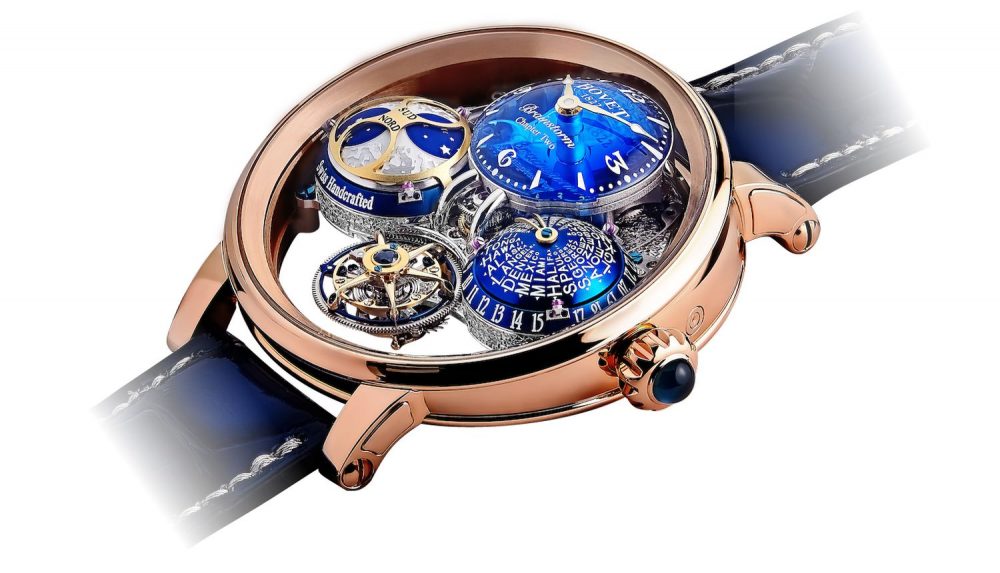 The domes of the second time zone and the moon phase rotate by the patented mechanism called the Radial Guidance System. Three rollers, in rubies adjustable by a micrometric screw, are arranged on the circumference of each dome. They ensure centering and the rotation minimizes friction and increases the chronometry and the power reserve of the timepiece.

The five days of the phenomenal autonomy of this combination of high complications are displayed by a linear indicator, visible through a window positioned subtly in the middle of the case between the two strap lugs at 12 o’clock.

A total of only 60 movements will be produced for the Brainstorm Chapter Two, an exclusivity that responds to the definition of real luxury as conceived by Mr. Pascal Raffy and the artisans of the House of Bovet 1822. The Récital 26 Brainstorm Chapter Two is limited to five pieces in each declination, and the use of it for unique pieces is also possible.

Royist is a leading boutique concierge offering luxury lifestyle management services to select members worldwide. Enjoy an unrivalled global 365/24/7 service.
View Editorial's profile
Brands Collection — Explore a curated selection of the finest horology brands
View the collection
Featured Timepieces
Horology
Introducing the Bugatti Chiron Tourbillon Baguette Black and Orange Sapphires
It all started with an idea conceived by Jacob & Co. together with Bugatti - how to reproduce the visceral sensation of the iconic Bugatti 16-cylinder engine in a timepiece.
Horology
Piaget’s Limelight Gala is a celebration of extraordinary women
In a tribute to the Limelight Gala and its illustrious history, Piaget is presenting six new limited editions for Watches & Wonders 2021.
Horology
Introducing Esperanza, the first treasure in Chopard’s Red Carpet Collection
Surrounded by countless legends, emerald has inspired Chopard’s Haute Joaillerie workshops to create a new jewellery watch, crafted in ethical 18-carat white gold and entirely set from dial to bracelet with emeralds and diamonds.
Horology
Introducing Hublot’s Big Bang Integral Tourbillon Full Sapphire
A new integral bracelet and case custom-made from sapphire: this feat affirms yet again the technical proficiency and the exceptional expertise that Hublot has acquired in the working of sapphire.
Horology
Louis Vuitton introduces the Tambour Carpe Diem
By combining exclusive high watchmaking caliber with a subversive Vanitas, Louis Vuitton orchestrates a scintillating show with the Tambour Carpe Diem.
Horology
The four chapters of Jaeger-LeCoultre Reverso Hybris Mechanica Calibre 185
Jaeger-LeCoultre celebrates an icon, the Reverso, by releasing the most complicated timepiece ever presented in this emblematic collection.
Horology
Richard Mille introduces the Rm 21-01 Tourbillon Aerodyne
With the RM 21-01, Richard Mille presents a new case design. The complex structure of the case in 5N red gold is reinforced with an exoskeleton in Carbon TPT, used for the bezel and pillars.
Horology
Unveiling Audemars Piguet’s limited “Black Panther” edition
Audemars Piguet reveals the first iteration of its Marvel heroes watch series: the Royal Oak Concept “Black Panther” Flying Tourbillon, limited to 250 pieces.
Horology
Introducing the Patek Philippe Ref. 7118/1450R-001 Nautilus Haute Joaillerie
To celebrate the opening of Watches and Wonders Geneva 2021, Patek Philippe is providing a place of honor for its legendary Nautilus collection.
Horology
Roger Dubuis Excalibur Superbia features two flying tourbillon in a manufacture skeleton calibre
A hyper watch for a hyper tribe, the Excalibur Superbia is the demonstration of a shared mindset focused on living life to the fullest extent and with the greatest intensity.
Horology
Christophe Claret presents the X-TREM-1 Calavera
This emblematic celebration of Mexican culture inspired Christophe Claret for this new version.
Horology
Beauty from above and beyond — The De Bethune DB28XP Meteorite
The iconic "DB28XP" now appears with a black zirconium case and a meteorite dial featuring distinctive geometric shapes.
Timepiece Extravaganza
Discover our membership —  ™Request Invitation
We use cookies and similar technologies to give you the most relevant experience by remembering your preferences and repeat visits. By clicking “Accept”, you consent to the use of all cookies.
Cookie settingsACCEPT
Manage consent