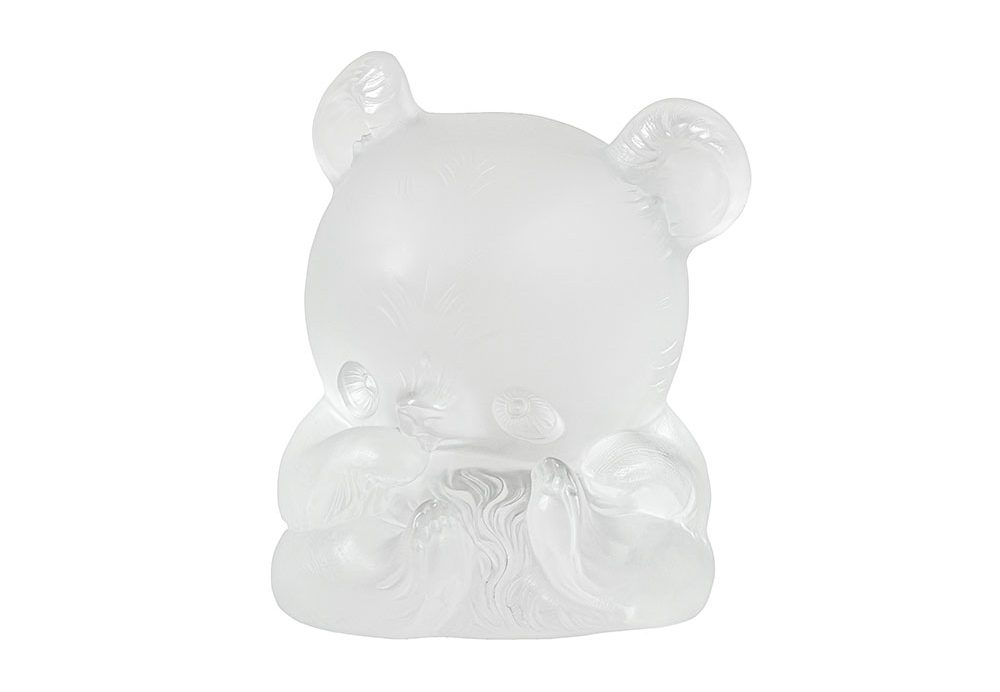 Nature was the prime source of inspiration for founder René Lalique. His bold endeavour to capture and magnify the elementary sparks of life was a thread running through his work, almost a school in itself. Though separated by some 130 years and a continent, the Chinese artist Han Meilin draws the same breath of inspiration. A master revered at home and an ambassador of beauty to the rest of the world, Han Meilin is a distinguished UNESCO Artist of Peace.

Moulded by the great Chinese traditions he learned travelling the country, Han Meilin has worked for more than 60 years in many fields of artistic expression, including painting, calligraphy, sculpture, writing, ceramics, animation and design. Whatever the artist turns his hand to, he brings his own touch and a taste for simplicity, for rounded figures that are immediately recognizable and for lively and supple artistic gestures.

In 2019, to celebrate 55 years of Franco-Chinese relations, it seemed natural for Lalique to open the doors of its crystal works and place the expertise of its master craftsmen at the service of this energetic and inquisitive artist. In choosing to create effigies of pandas, the ultimate symbols of the bonds that link China and France, Han Meilin has taken to the extraordinary medium of crystal with a rare delicacy of touch. 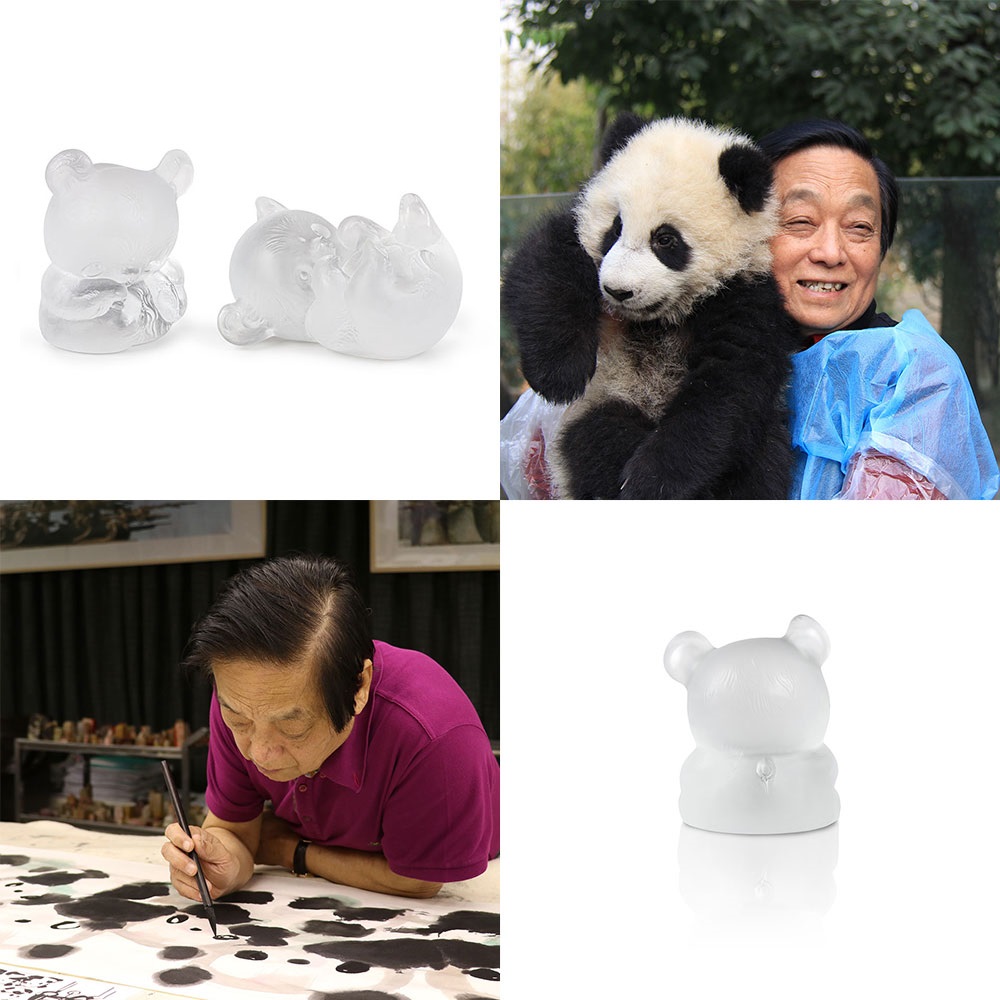 There is a sense of tenderness that emanates from his rounded, mischievous figures. He captures a moment of life in the wild, a grooming gesture or a frolic on the ground. His gaze is open, the eyes soft and sparkling. The newborn from the Lalique crystal factory, Yuan-Yuan and Meng-Meng, a seated male and a prone female, are both products of Han Meilin’s fertile imagination. With an innocence that belies his 82 years, the Chinese artist marvels at the world through the eyes of a child. He grooms, sketches and models animals for the most part: dogs, cats, tigers, monkeys and the like. He draws his inspiration from a solid grounding in traditional Chinese culture, ranging from his fascination with ancient characters to cave painting, by way of folklore, traditional textiles and clay sculpture. “The national character is the root of my work,” says the artist who has spent several decades collecting inscriptions, marks and symbols from all over China.

A fragile species, mentioned in ancient Chinese texts 3000 years ago, the panda reigns majestically over Han Meilin’s artistic repertoire. In addition to an ink drawing that served as an effigy for a stamp issued in China, the artist has no fewer than twelve young specimens in his bestiary – sculpted, lying down or seated. In 2019, the savoir-faire of Lalique’s artisans, enabled him to fashion two of his beasts in pure crystal. Offered as diplomatic gifts in token of friendship since the Tang dynasty, the panda is the ultimate symbol of the bonds that link China and France. 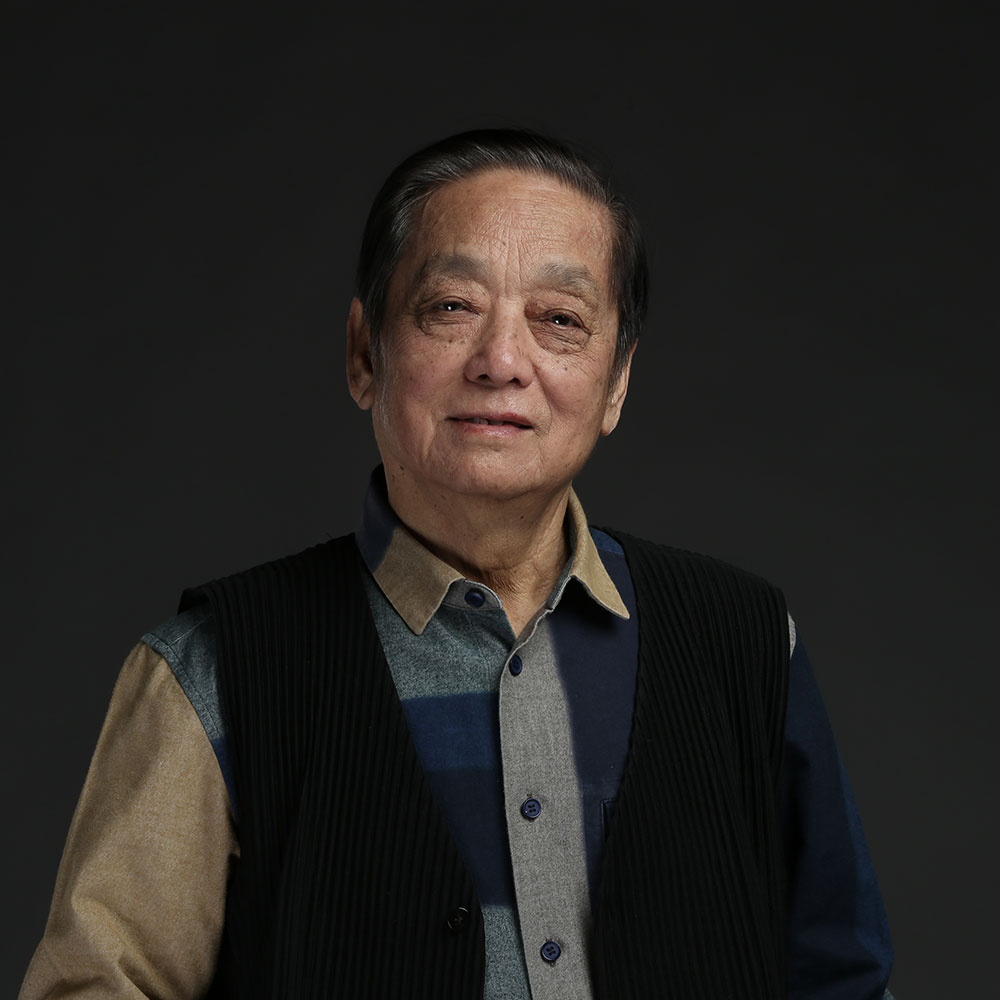 Born in China in 1936 in the province of Shandong, Han Meilin is a true all-rounder who has pursued his vocation with passion for more than 60 years. This complete master artist also teaches painting, calligraphy, ceramics and the history of the visual arts. From the very beginning, Han Meilin has drawn his inspiration from the traditions and folklore of his native country, which pays homage to him on “Han Meilin Day”, inaugurated on 21 December 2013. Creator of the mascots for the 2008 Beijing Olympics, Han Meilin has exhibited his calligraphy and sculpture all over the world. He has received multiple honours, including being appointed a UNESCO Artist of Peace in 2015, becoming the first Chinese artist to get this recognition.

Royist is a leading boutique concierge offering luxury lifestyle management services to select members worldwide. Enjoy an unrivalled global 365/24/7 service.
View Editorial's profile
Our lifestyle team suggests extraordinary gift ideas and provides bespoke research, acquisition and delivery of rare and hard-to-find items through our vetted international network of suppliers and partners. For more information, please request an invitation.
Style BrandsDiscover fashion houses, established jewelers and independent designers across the globeView BrandsWe offer an international fashion concierge service, including bespoke shopping experiences, luxury gift sourcing, fashion show access and personal styling services
Featured Stories
Home
Cervélo x Automobili Lamborghini ultra-limited edition R5 road bike
Dressed in an all-Italian suite of components, this R5 goes beyond the tricolore in showing its devotion to Italian luxury.
Home Z Featured
Discover Maison Goyard’s timeless Art of Living and Travelling
Bespoke luggage and trunk-maker, Maison Goyard offers products of the finest quality and craftsmanship, born from tradition, elegance and excellence.
by Georgie Campbell
Home
Giorgio Collection: the luxury experience of furnishings Made in Italy
The perfect match of finest materials, attention to details and Italian craftsmanship. Art Deco vibes mingle with cutting-edge shapes.
Home
Based Upon is a London studio whose commissioned works move into the realm of the priceless
Over 16 years’ since its inception in 2004 Based Upon has gained a reputation as a professional, highly-sought-after artist with an intuitive eye for depth, beauty and meaning.
Home
Colin Burn’s Limited Edition Pearl Royale Chess Set radiates pure opulence
Crafted in solid 18k white gold and pave’ set with over 510 carats of fine diamonds, the Pearl Royale stands as the world’s most luxurious chess set ever created.
Home
Minotti 2020 Collection, a new ideal of contemporary living by Rodolfo Dordoni
The new 2020 Collection – coordinated by Rodolfo Dordoni with Minotti Studio – outlines a new ideal of contemporary living: a project with a strong international vocation, though entirely Italian in its imprint.
Home
The Roche Bobois BOMBOM Collection by Joana Vasconcelos
A series of multifunctional pieces that are playful, alluring and optimistic designed exclusively by Joana Vasconcelos.
Home
A unique gift proposition, Dolce&Gabbana x Fiasconaro limited edition sweet treats
The collaboration between the creativity of Dolce&Gabbana and the confectionery artistry of Fiasconaro results in a unique recipe: the typical Milanese panettone, revisited with the flavours of Sicily.
Home
Between tradition and modernity: the Rosenthal Heritage Collection
Past and present linked in style: With the "Midas" décor designer Gianni Cinti reinterprets the classic Rosenthal shape Sanssouci.
Home
Lalique’s Hirondelles Perfume Bottle Is Re-issued For a Collector’s Edition
2020 marks the 100th anniversary of René Lalique’s Villa, in Wingen-sur-Moder, France.
Home
The champagne chest by Rolls-royce Motor Cars is an epicurean delight
Discover the meticulously crafted House of Rolls-Royce Champagne Chest, part of the Rolls-Royce accessory portfolio.
Home
Travel-inspired furniture with the Louis Vuitton’s Objets Nomades collection
Louis Vuitton’s Objets Nomades is a collection of travel-inspired furniture and objects made in collaboration with internationally renowned designers.
Discover our membership —  ™Request Invitation
We use cookies and similar technologies to give you the most relevant experience by remembering your preferences and repeat visits. By clicking “Accept”, you consent to the use of all cookies.
Cookie settingsACCEPT
Manage consent