Frank Buchwald’s “Machine Lights”, an impressive collection of hand-crafted lamps, were part of the initial line-up of artists showcased at the inauguration of the first M.A.D.Gallery in Geneva. They have inspired the admiration of MB&F founder Maximilian Büsser from the start, landing Buchwald’s work a permanent exhibit at the M.A.D.Galleries. The first “Nixie Machine” followed a few years later: a clock created around vintage Nixie tubes, following the same alien-like, sci-fi aesthetic.

Introduced in the 1950s, Nixie tubes – also known as cold cathode displays – became a popular way of presenting numerals using glow discharge. The name Nixie is thought to derive from the Burroughs Corporation’s “NIX I,” which in turn was believed to have stood for “Numeric Indicator eXperimental No.1.”

Each glass tube is filled with a low-pressure neon-based gas and includes a wire-mesh anode and layered cathodes shaped like numerals; a separate cathode is needed for every numeral 0 to 9. A distinctive orange glow discharge surrounds each cathode when power is applied. Assembled in multi-digit arrays by connecting electronic circuitry to several tubes, Nixie tubes were often used for computers, clocks, and frequency counters, though these were eventually supplanted by more practicable, less costly – though arguably less charming – displays such as light-emitting diodes (LEDs). 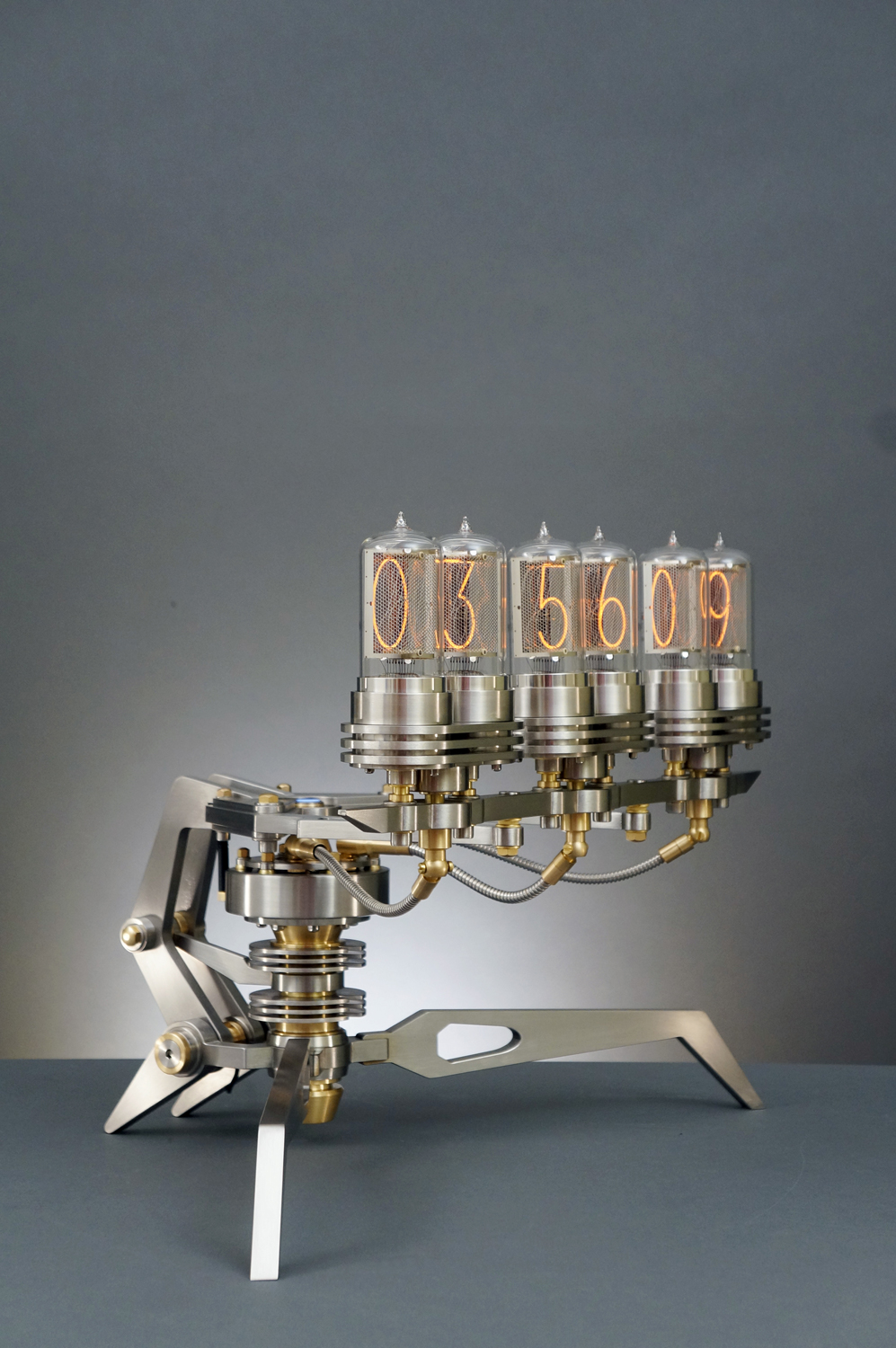 The new Nixie Machine III represents the next stage of evolution in the work of Frank Buchwald. Each and every detail has been manually handcrafted: from design, construction, and detailed workmanship of the clock to the six Nixie tubes fabricated by Dalibor Farny (see separate paragraph).

Forging onwards from the first and second editions of the Nixie Machine series, this third – and final – Nixie Machine consolidates Frank Buchwald’s design and structural principles into a futuristic work of art whose dynamic emphasis is dominated by the machine-like character of the design: the form is compact and vigorous and the proportions perfectly executed. 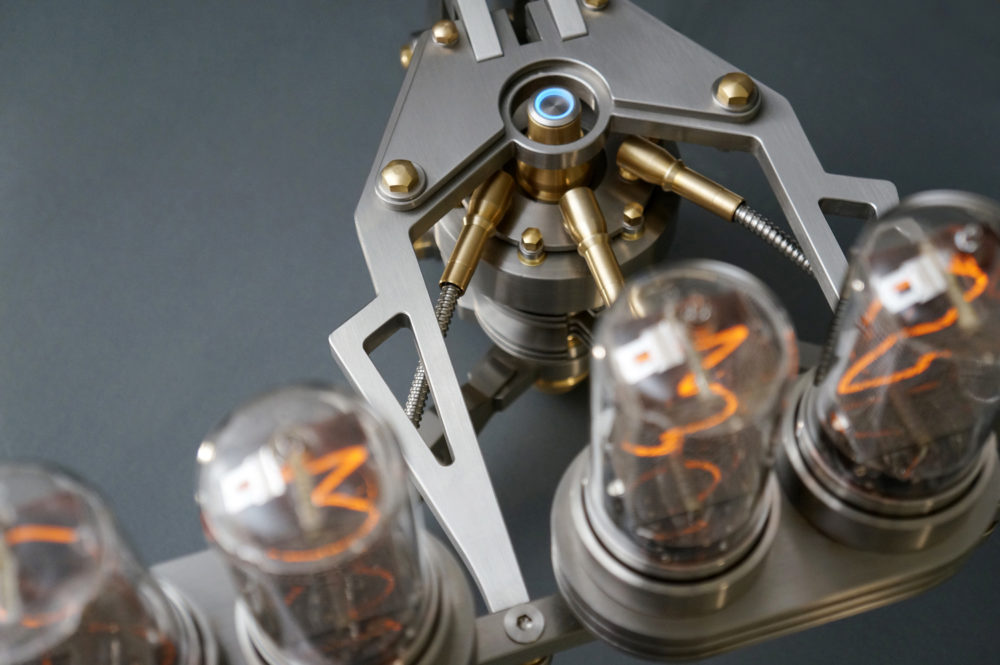 At first glance, the succession of six Nixie tubes seem to hover above the substructure, pulling the eye instinctively inwards to the numeric information floating within the confines of each glass bulb. Closer scrutiny reveals piece by piece the intrinsic principles comprising the quintessential structure of the machine: a duo-support bracket riveted with massive steel bolts, steel and brass discs to the solid base construction and a central cylindrical tower. Extending from the duo-support bracket is the additional structural support, holding the row of tubes like arms, which ‘hand over’ time to the viewer.

Flexible metal hoses feed the Nixie tubes energy and information from the electronic core of the machine, which houses also the main central switch, illuminated like a blueish preternatural ‘eye’. The special design of this third edition of the Nixie Machine necessitated the development of a new electronic circuit board with circuit components and 66 contact pins compressed onto a small round surface corresponding to the size of the machine’s central body. This innovation was no small feat for Dalibor Farny, creator and engineer of the repurposed Nixie tubes and collaborator with Frank Buchwald on Nixie Machines II and III. 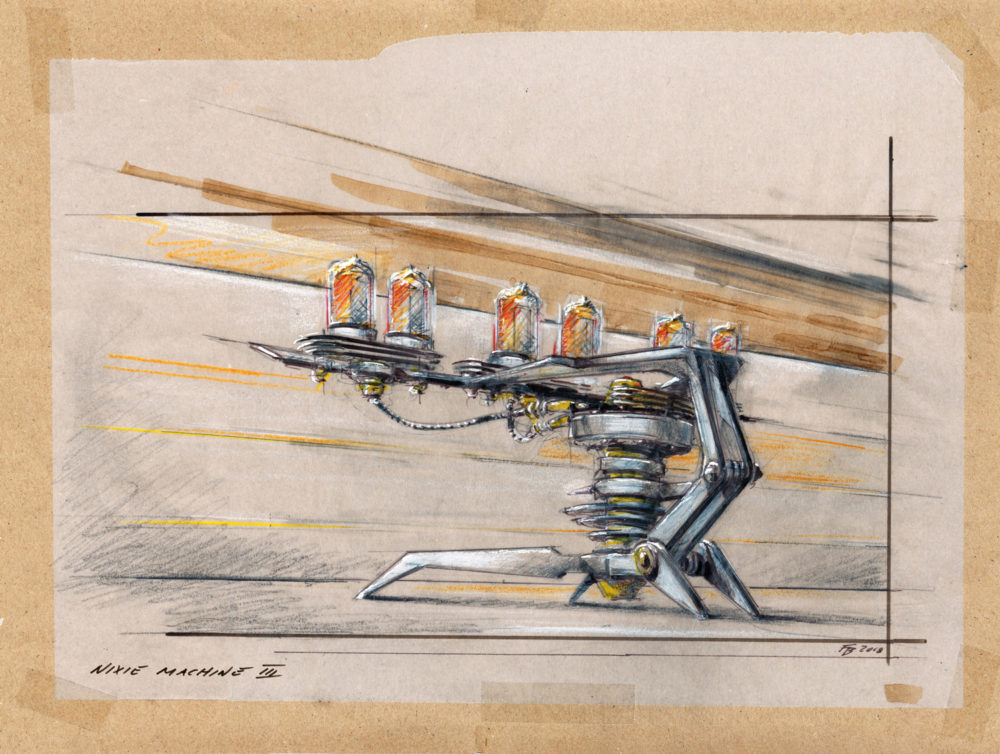 The Nixie Machine III is made of solid stainless steel. All components have been exclusively hand-sanded and polished. The electronic heart of the Nixie Machine III takes on an unprecedented approach to telling time: at the machine’s core are powerful, wi-fi enabled electronics, allowing internet connectivity and guaranteeing both ceaseless accuracy of time and emancipation from manual setup.

All settings and special features (including scroll effects, day/night mode, digital-light dimming, time-zone settings and more) can be set online – obviating the need for a user manual. The clock itself is, however, autonomous: it can operate both on- and offline. 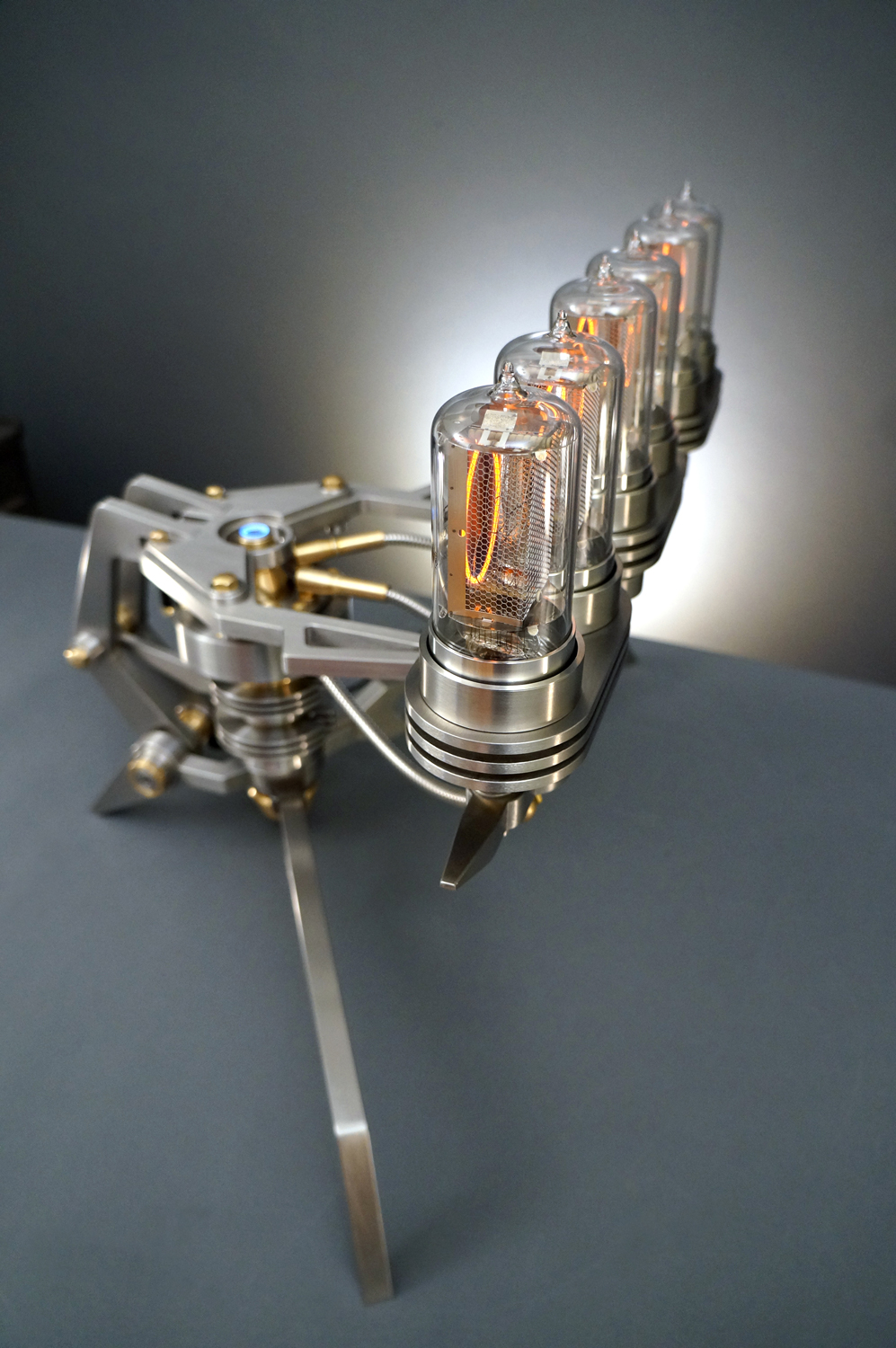 Buchwald’s Machine Lights are majestic hand-crafted lamps featuring an almost anatomical form thanks to their alien-like, four-footed bases and quasi-corporeal symmetry. Describing his creations, Buchwald says, “The attentive observer will not fail to notice that the Machine Lights live from a source other than the hand of man. Although I have worked for over ten years on them, I don’t really regard them as my own work: they are beings in their own nature.”

It took Buchwald many years before he felt that the designs of his sculptural lights were moving in the right direction and an even longer time until he could say he was completely satisfied. “The individual lamp models were not designed spontaneously in a moment of inspiration,” he elaborates. “It was rather a long groping for a hard-to-comprehend, meaningful form.” 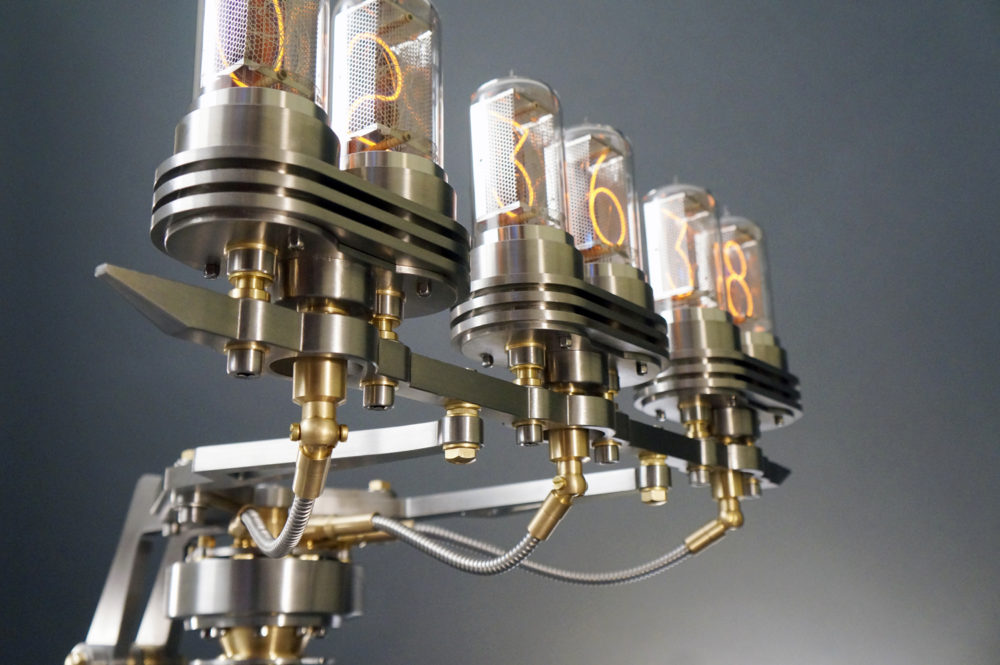 Each lamp is made using more than 200 individual components in an intricate combination where burnished blackened steel throws the rich patina of brass and the warm, yellow glow of visible light filaments into sharp relief. Every brass component is meticulously hand-polished, while the steel is repeatedly hand-burnished with chemicals to achieve an impressive silky black oxidation. The creation is often completed with the addition of a hand-blown glass globe.

After dedicating more than a decade to the collection of his Machine Light designs Buchwald admits, “I have the feeling that the Machine Lights now portray what I imagine them to, I think that they have now reached the right level of completeness and perfection.”

Royist is a leading boutique concierge offering luxury lifestyle management services to select members worldwide. Enjoy an unrivalled global 365/24/7 service.
View Editorial's profile
Our lifestyle team suggests extraordinary gift ideas and provides bespoke research, acquisition and delivery of rare and hard-to-find items through our vetted international network of suppliers and partners. For more information, please request an invitation.
Style BrandsDiscover fashion houses, established jewelers and independent designers across the globeView BrandsWe offer an international fashion concierge service, including bespoke shopping experiences, luxury gift sourcing, fashion show access and personal styling services
Featured Stories
Home
Cervélo x Automobili Lamborghini ultra-limited edition R5 road bike
Dressed in an all-Italian suite of components, this R5 goes beyond the tricolore in showing its devotion to Italian luxury.
Home Z Featured
Discover Maison Goyard’s timeless Art of Living and Travelling
Bespoke luggage and trunk-maker, Maison Goyard offers products of the finest quality and craftsmanship, born from tradition, elegance and excellence.
by Georgie Campbell
Home
Giorgio Collection: the luxury experience of furnishings Made in Italy
The perfect match of finest materials, attention to details and Italian craftsmanship. Art Deco vibes mingle with cutting-edge shapes.
Home
Based Upon is a London studio whose commissioned works move into the realm of the priceless
Over 16 years’ since its inception in 2004 Based Upon has gained a reputation as a professional, highly-sought-after artist with an intuitive eye for depth, beauty and meaning.
Home
Colin Burn’s Limited Edition Pearl Royale Chess Set radiates pure opulence
Crafted in solid 18k white gold and pave’ set with over 510 carats of fine diamonds, the Pearl Royale stands as the world’s most luxurious chess set ever created.
Home
Minotti 2020 Collection, a new ideal of contemporary living by Rodolfo Dordoni
The new 2020 Collection – coordinated by Rodolfo Dordoni with Minotti Studio – outlines a new ideal of contemporary living: a project with a strong international vocation, though entirely Italian in its imprint.
Home
The Roche Bobois BOMBOM Collection by Joana Vasconcelos
A series of multifunctional pieces that are playful, alluring and optimistic designed exclusively by Joana Vasconcelos.
Home
A unique gift proposition, Dolce&Gabbana x Fiasconaro limited edition sweet treats
The collaboration between the creativity of Dolce&Gabbana and the confectionery artistry of Fiasconaro results in a unique recipe: the typical Milanese panettone, revisited with the flavours of Sicily.
Home
Between tradition and modernity: the Rosenthal Heritage Collection
Past and present linked in style: With the "Midas" décor designer Gianni Cinti reinterprets the classic Rosenthal shape Sanssouci.
Home
Lalique’s Hirondelles Perfume Bottle Is Re-issued For a Collector’s Edition
2020 marks the 100th anniversary of René Lalique’s Villa, in Wingen-sur-Moder, France.
Home
The champagne chest by Rolls-royce Motor Cars is an epicurean delight
Discover the meticulously crafted House of Rolls-Royce Champagne Chest, part of the Rolls-Royce accessory portfolio.
Home
Travel-inspired furniture with the Louis Vuitton’s Objets Nomades collection
Louis Vuitton’s Objets Nomades is a collection of travel-inspired furniture and objects made in collaboration with internationally renowned designers.
Discover our membership —  ™Request Invitation
We use cookies and similar technologies to give you the most relevant experience by remembering your preferences and repeat visits. By clicking “Accept”, you consent to the use of all cookies.
Cookie settingsACCEPT
Manage consent