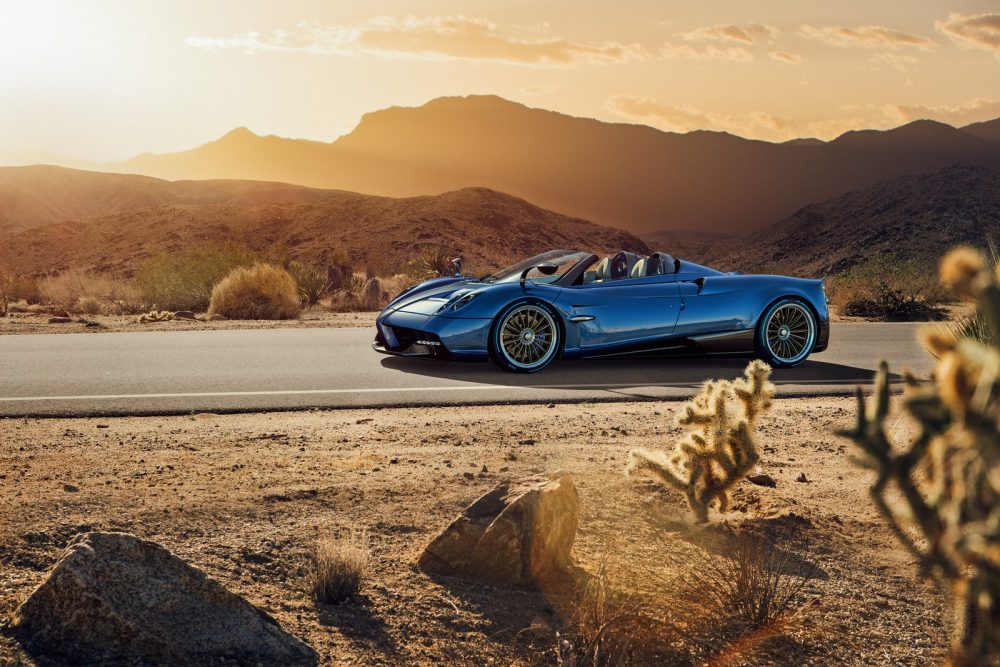 One of the ambitious goals set at the beginning of the project was to build a Roadster that would be lighter than the Coupe, improving the torsional rigidity of the frame. Armed with the expertise gained from the Zonda R, Huayra Coupe and the Huayra BC, the Pagani engineering team further refined the development of carbo-titanium. Combined with a new form of composite material and developed for the Huayra Roadster, it is considered more advanced than materials used for Formula 1 cars.

This complex and highly ambitious undertaking has allowed for a 52% increase in stiffness, at the same weight, thanks to the combination of the Carbo-Titanium and the Carbo-Triax HP52. The dry weight of the Huayra Roadster measures 1,280kg, about 80kg less than the Huayra Coupe, while also increasing in torsional flexional rigidity – an incredible achievement by its own right, from a purely technical standpoint. 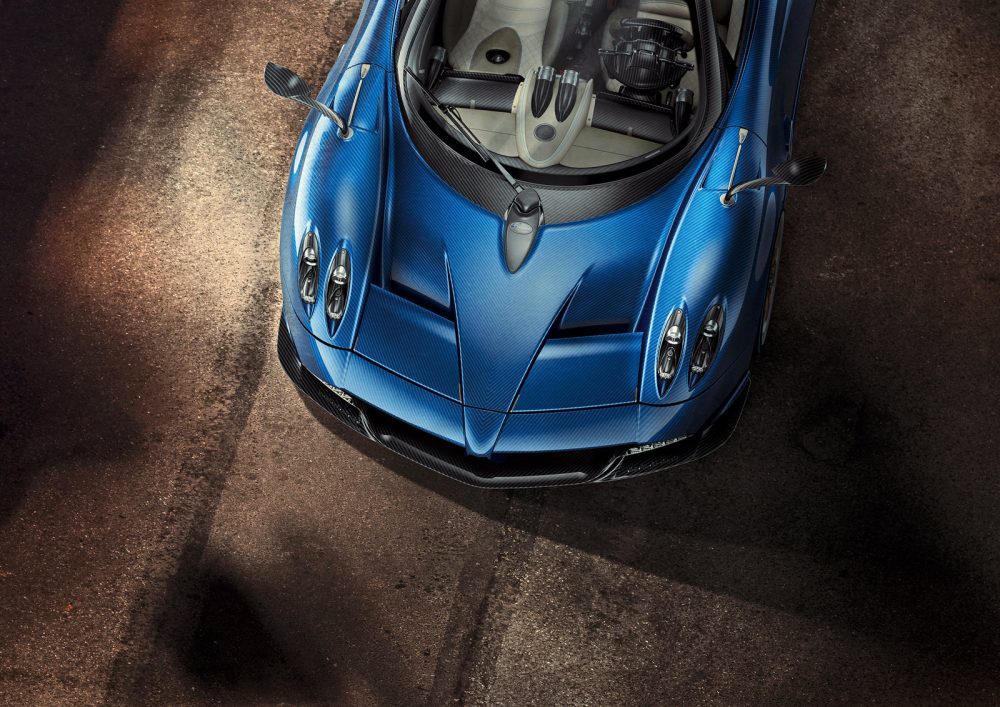 The Pagani Huayra Roadster is powered by the Mercedes-AMG M158 engine. The twelve-cylinder engine, built specifically for Pagani by Mercedes-AMG, has  benefitted  from  the  research  and  development  done  for  the  Huayra  BC,  delivering  power  of 764 HP at 5500 RPM, with a torque of over 1000 NM already available from 2300 to 4300 RPM.

Equipped with the most cutting edge technology, the twin-turbo, 12 cylinder, narrow angled 60 degree engine with 5,980 cm3 has been developed to satisfy both the international homologation standards and the even more stringent Pagani internal standards, resulting in a driving experience both relaxed and electrifying. The turbines have been developed to provide an immediate throttle response without delay, providing the driver with full control of the vehicle. The dry sump lubrication allows for perfect engine response, even under the most extreme lateral acceleration conditions. The M158 motor is approved for the most restrictive EURO 6b and Carb environment regulations. 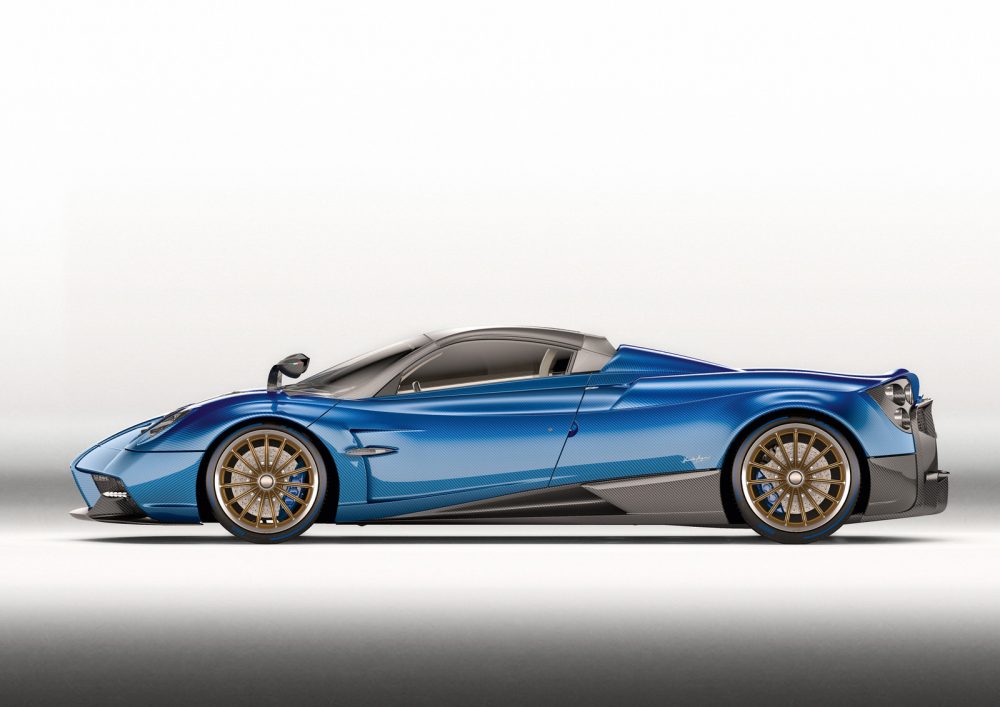 The extraordinary power and torque of the Huayra Roadster is powered by a new gearbox seven-speed AMT successfully developed for the Huayra BC. Built by X-Track, it incorporates a hydraulic and electronic activation system and is combined with new carbon synchronizers, resulting in seamless and absolute precision when shifting, thanks also to the development of a new ECU together with Automac. The differential is electronic, with an advanced control system developed in conjunction with Bosch, ensuring adaptation to all possible driving conditions: from day to day drivability to track performance, always providing driver stability and exceptional vehicle safety.

The weight of entire unit, including the electronic differential, is approximately 40% less than the standard dual-clutch gearbox. The gearbox itself is mounted in a transverse position, significantly reducing the polar inertia of the entire vehicle and moving optimally at the center of gravity of the car. This results in a safe understeering response of the Huayra Roadster, ensuring comfort and safety for road driving and predictable behavior and control on the track. 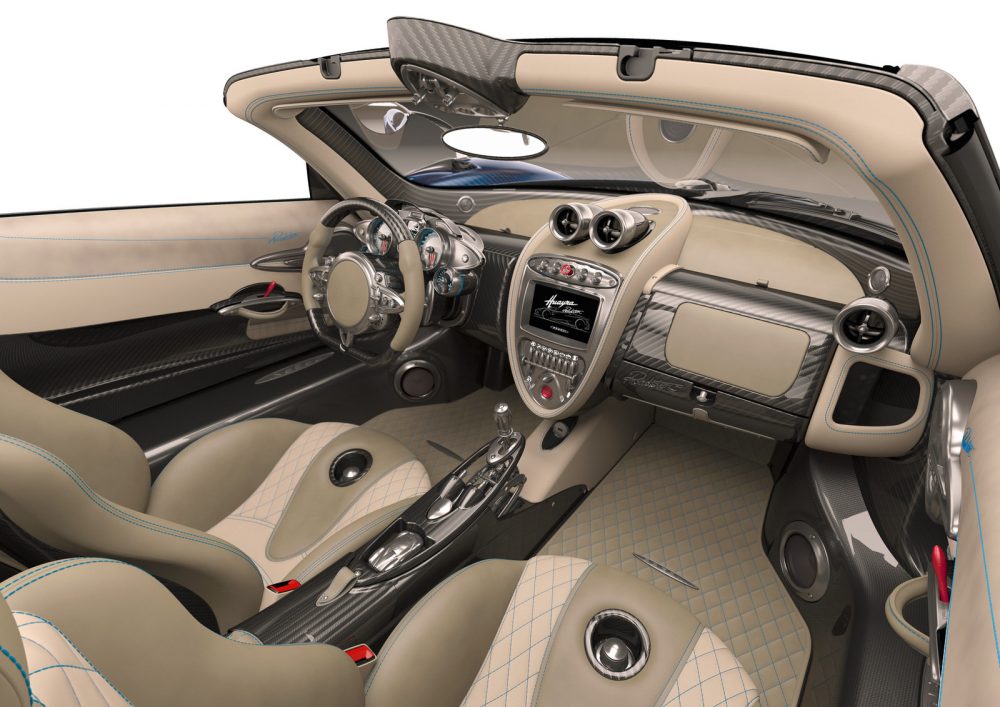 The refinement of the suspension of Pagani Automobili creations has always been a point of pride and a key component in the design of the cars signed by Horacio Pagani. In the same way the development of the technology behind the Zonda R flowed naturally into the development of the technology of the Huayra Coupe, the Huayra BC development was the staging ground for the Huayra Roadster. Every concept learned from the previous model is applied and further developed for the new model. All of the suspension assembly is a work of art and a concentration of the latest technology, made in a lightweight aluminum alloy, called HiForg, designed specifically for the Huayra Roadster. This lightened the car by 25%, compared to the Huayra coupe, an extraordinary result for a car already considered the paragon in optimizing power-weight ratio.

This sophisticated and technological marvel enables in the Huayra Roadster perfect behavior under any driving situation.

Continuing intensive development over the past five years, Pagani Automobili and Bosch have developed a new ESP system for the Huayra Roadster – an electronic stability control system enhancing the dynamic capabilities of the Huayra Roadster without ever being invasive, without ever giving the impression that any power other than the pilot himself has control of the vehicle. The system is a natural extension of the dynamic abilities of the car.

It has always been a baseline requirement from the earliest design phases that the car must be mechanically sound with safe understeering, before starting the development of electronic control systems.

The development started on the Huayra BC and was refined for the characteristics of the Huayra Roadster, leading to the identification of five distinct driving modes: Wet, Comfort, Sport, Race and ESC Off. Each with its own soul, fully maximizing the potential of the latest creation from the atelier of San Cesario sul Panaro. 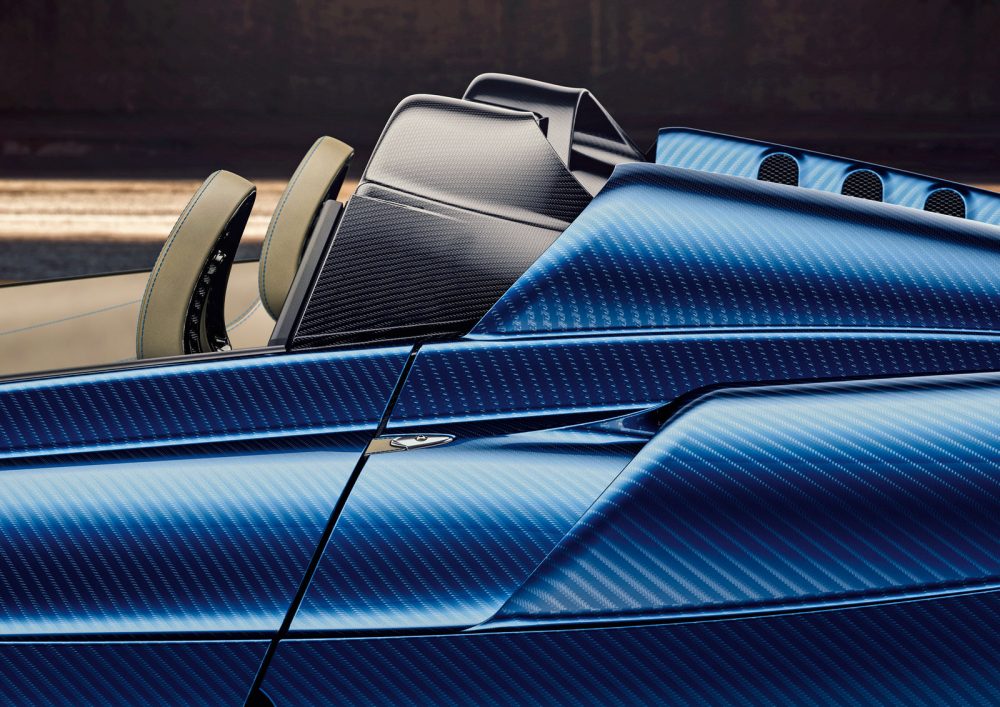 Huayra, the god of wind. With the Huayra Coupe Pagani Automobili was the first automaker to develop a fully computerised Active Aerodynamic system on a production car. The concept has been further developed on the Huayra BC and brought to excellence on the Huayra Roadster.

Four flaps, two in the front and two in the rear, together with the front active suspension, work independently to ensure continuous optimum safety and a considerable performance in all conditions. The active aerodynamic system works to keep the bottom of the vehicle always parallel to the road, increasing the efficiency of the air flows above and below the car, ensuring an optimal downforce on both road and track.

Beauty as a marriage of form and function: the central front section, the front extractors and a flat bottom. Always well-defined lines. A great work of study, simulation and testing on 1:1 scale models in the wind tunnel, has been done to minimize turbulence and air flows which generally occur in an open-top car at the rear roll bar and front window level. The work carried out to ensure the Huayra Roadster with efficient downforce under all conditions, has proved very important and took a long time and concentration. But it went hand in hand with the concept of style, creating a sinuous but defined shape, which reveals the dynamic and performance qualities of Huayra Roadster. 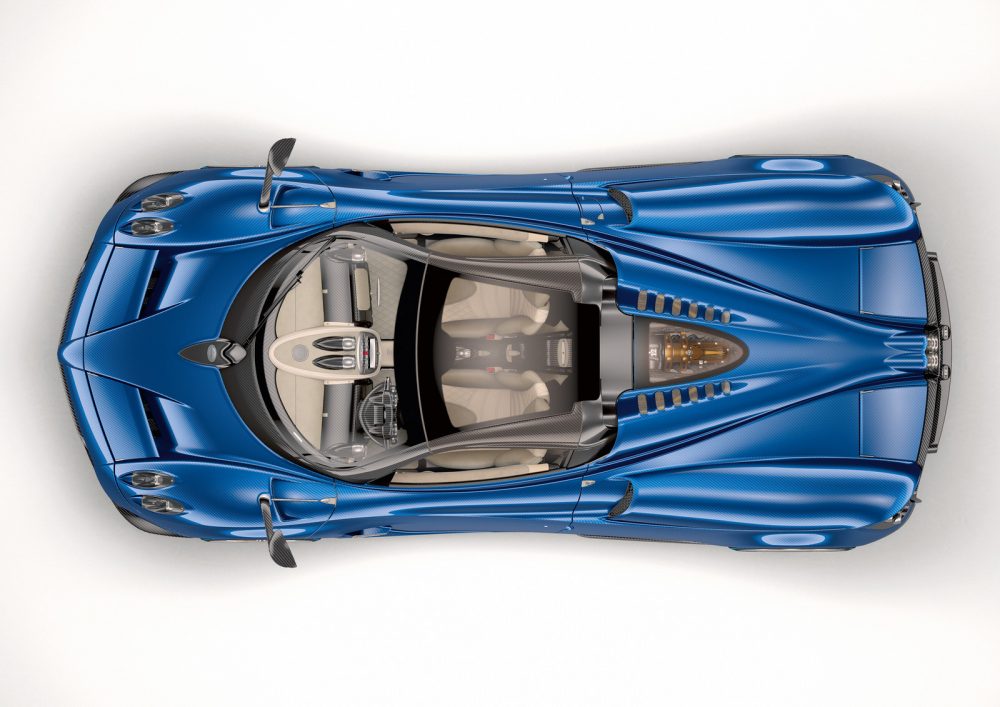 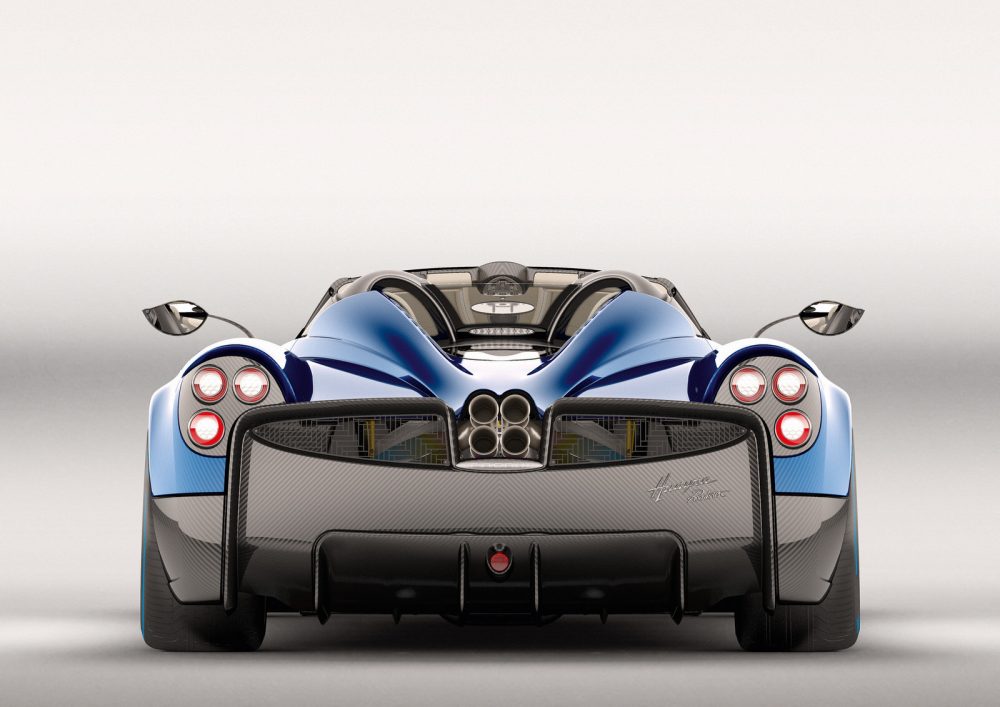 Pagani Huayra Roadster will be fitted with two types of roof. The first consists in a very light carbon hard top with a central glass element, very simple and quick to install. In this configuration it assumes the look of a coupe, with a glass roof that provides the passenger a unique brightness, protecting them from UV rays and also giving a sense of freedom typical of a Roadster even with the installed hard roof.

The second type of roof is a fabric and carbon cover that can be easily installed manually and can be stored inside of Huayra Roadster. The Soft Roof can be installed in a few simple steps and in case of emergency.