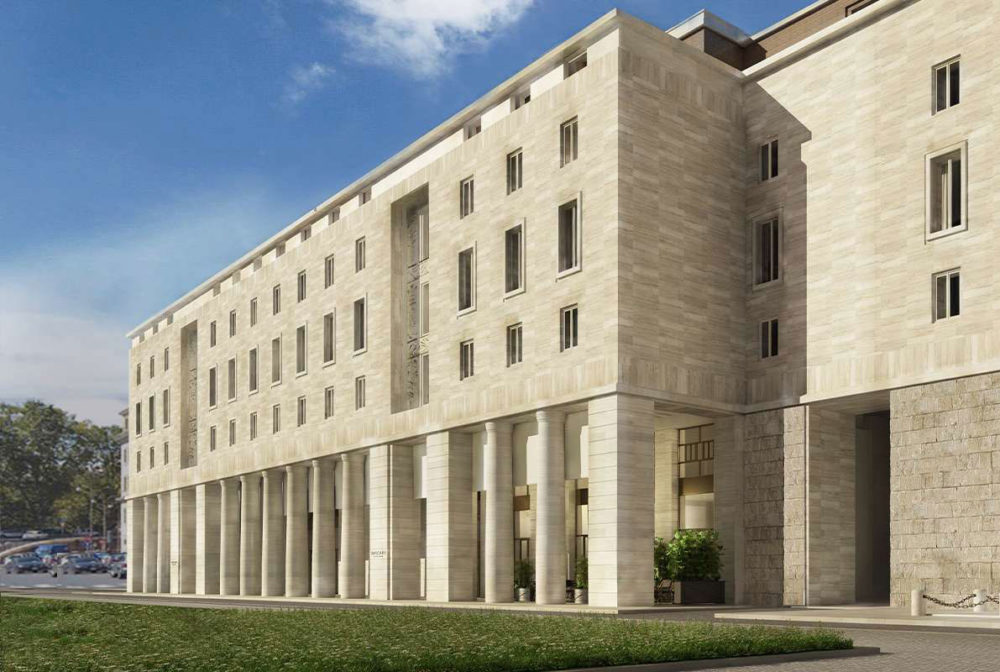 Comprised of a few, selected properties in major cosmopolitan cities and luxury resort destinations, Bulgari Hotels & Resorts convey the excitement of the Bulgari brand, its timeless glamour and its heritage as a magnificent Italian jeweller. Opening in 2022, Bvlgari Hotel Roma is an exceptional homage to the home of Bvlgari and its greatest source of inspiration. The Hotel will be located in the heart of the Campo Marzio neighborhood, minutes from the Spanish Steps, Via del Corso and the Bvlgari flagship on Via Condotti.

The new Bvlgari Hotel Roma will occupy a magnificent modernist building from the 1930s that faces two of Rome’s most iconic landmarks: the Ara Pacis and the Mausoleum of Augustus, the first Roman Imperator.

Like all Bvlgari Hotels properties, the Italian architectural firm Antonio Citterio Patricia Viel will be in charge of both the restoration of the building and the interior design of the new Bvlgari Hotel Roma, which will count over 100 rooms, most of them suites, as well as the prestigious Il Ristorante curated by Michelin-starred chef Niko Romito and The Bvlgari Bar.

Materials such as ochre Travertine marble and burnt red brick emphasize the link to Emperor Augustus’ ancient Rome, while a rotating collection of both modern and antique art conjures gloriously different facets of the Eternal City’s rich legacy as one of the world’s most beautiful cities and an enduring cradle of arts and culture.

Set to open in 2022, it is poised to become a temple of Bvlgari heritage in the city that has given so much to the Italian jeweller.

Travel ExperiencesHand-picked by our lifestyle team, our travel specialists deliver the finest experiences and are praised internationally for exuding an extraordinary factor of client service.Start Planning here
Share
BulgariHotelrome
About me

Royist is a leading boutique concierge offering luxury lifestyle management services to select members worldwide. Enjoy an unrivalled global 365/24/7 service.
View Editorial's profile
Publication — Explore a curated selection of the finest luxury experiences
View publication
Travel Journal Highlights
Tangalle
| Sri Lanka
Explore the untouched paradise of Tangalle in complete luxury at Amanwella
Amanwella offers guests the finest escape on the sun-drenched south coast, shaded by coconut palms and cooled by the Indian Ocean breeze.
by Sophie Smith
Oslo
| Norway
Hotel Continental, Norway is a beacon of luxury since opening in 1900
Hotel Continental offers guests the ultimate five-star cultural experience in Norway’s biggest city.
by Amalie Andersen
Wolgan Valley
| Australia
Emirates One&Only Wolgan Valley offers a blend of wildlife, natural beauty, conservation and heritage
Hidden deep in the sanctuary of the eucalyptus-cloaked Blue Mountains, nature meets luxury at the Emirates One&Only Wolgan Valley.
by Eibhlis Gale Coleman
Mahé
| Seychelles
Escape to a secluded retreat on one of the most coveted islands in the world: welcome to Four Seasons Seychelles
An astonishing resort and destination, Four Seasons Seychelles offers the perfect balance between a relaxing and yet exciting holiday on the country's main island of Mahé.
by Sara Fabbri
Dolomites
| Italy
Rejunivate with the panoramic view of a UNESCO World Heritage Site at Forestis Dolomites
Forestis Dolomites invites guests to invest in their wellbeing and take advantage of the healing properties of the Dolomites' and Forestis Wellness Centre inside their luxury escape.
by Sophie Smith
Dubai
| United Arab Emirates
The St Regis Dubai, The Palm opens on Palm Jumeirah
The St. Regis Dubai, The Palm offers bespoke service, celebrated rituals and exquisite culinary offerings from its world-famous Dubai address.
Melbourne
| Australia
The Langham, Melbourne is a sanctuary amidst the city’s captivating Arts and Leisure district
Experience impeccable hospitality and timeless elegance at The Langham's luxurious accommodations with enticing views of Melbourne.
by Eibhlis Gale Coleman
Suswa Mara Triangle
| Kenya
Explore unique Kenyan safari accommodation on the Great Rift Valley at Angama Mara
At Angama Mara, guests picnic with giraffes; wake up to the serenade of hyenas and watch the stars across the Mara Triangle in award-winning accommodation.
by Sophie Smith
Mexico City
| Mexico
Rosewood Mexico City to debut in 2024 as the brand’s fifth property in Mexico
The new Rosewood property embraces the brand's 'A Sense of Place' philosophy to reflect Mexico's history, culture and sensibilities.
Amalfi Coast
| Italy
Explore Neapolitan Italy in Hotel Caruso: a former palace hidden on the Amalfi Coast
An 11th century palace and architectural haven, Hotel Caruso invites guests to explore the rich history and contemporary culture of the Amalfi Coast.
by Sophie Smith
Simpson Desert
| Australia
Longitude 131° luxury camp offers an essential experience of Australia’s spiritual heartland
With views direct to Uluru and across the desert to Kata Tjuta, Longitude 131˚ is Australia’s most celebrated luxury camp.
by Eibhlis Gale Coleman
Mykonos
| Greece
Santa Marina Mykonos at Ornos Bay brings a constant sense of freedom
Santa Marina, a Luxury Collection Resort, offers an exceptional location within walking distance of the village of Ornos and is home to Mykonos’s only private beaches.
View Travel Journal
Discover our membership —  ™Request Invitation
We use cookies and similar technologies to give you the most relevant experience by remembering your preferences and repeat visits. By clicking “Accept”, you consent to the use of all cookies.
Cookie settingsACCEPT
Manage consent