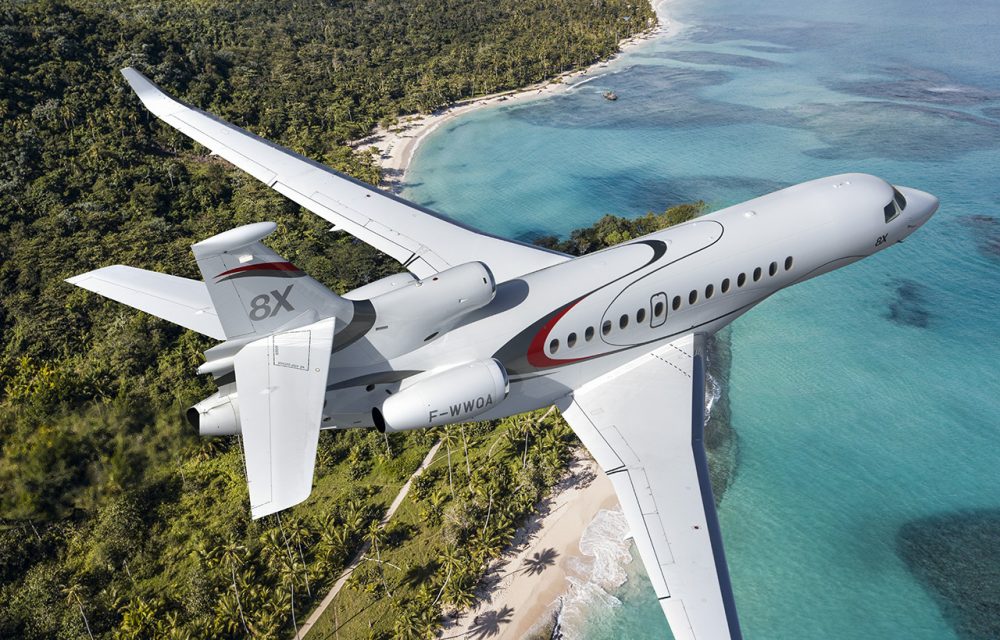 The Falcon 8X offers a range of 6,450 nm (11,945 km) and features the longest cabin of any Falcon.  Moreover, it offers the same low operating economics and the remarkable operating flexibility for which all Falcons are known. “The Falcon 8X will be our new flagship and a great complement to our product line,” says Dassault Aviation Chairman and CEO, Eric Trappier. “It builds on Dassault expertise in aerodynamics, in precision design and manufacturing, and in advanced digital flight controls. It embodies the best of Falcons that have come before with the most capability of any Falcon ever.”

With eight passengers and three crew, the Falcon 8X is powered by an improved version of the Pratt and Whitney Canada PW307 engine. These engines offer a significant reduction in fuel consumption, community noise and NOx emissions. Combined with improvements to wing design, the new power plant makes the 8X up to 35% more fuel efficient than any other aircraft in the ultra-long range segment, affording a corresponding savings in operating costs. 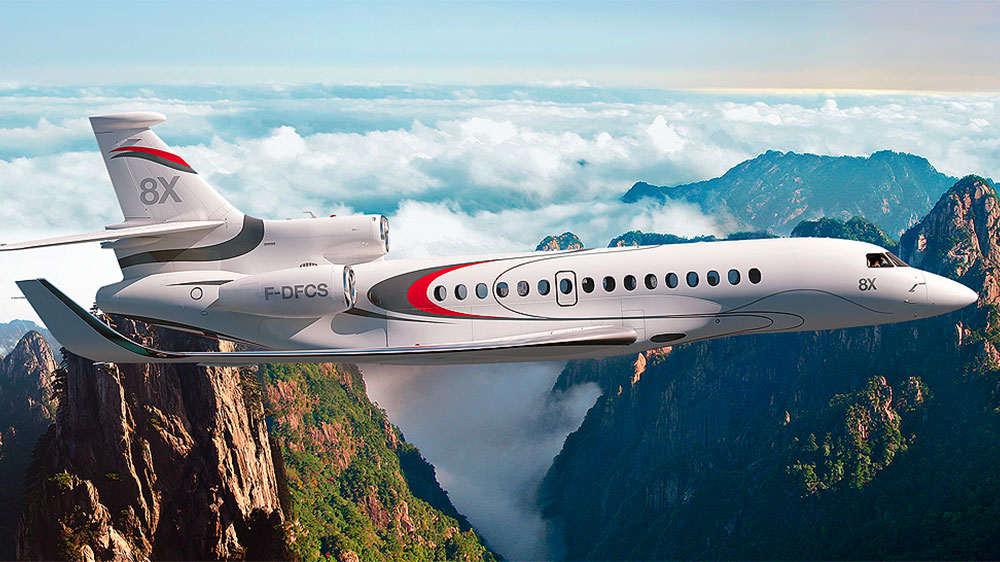 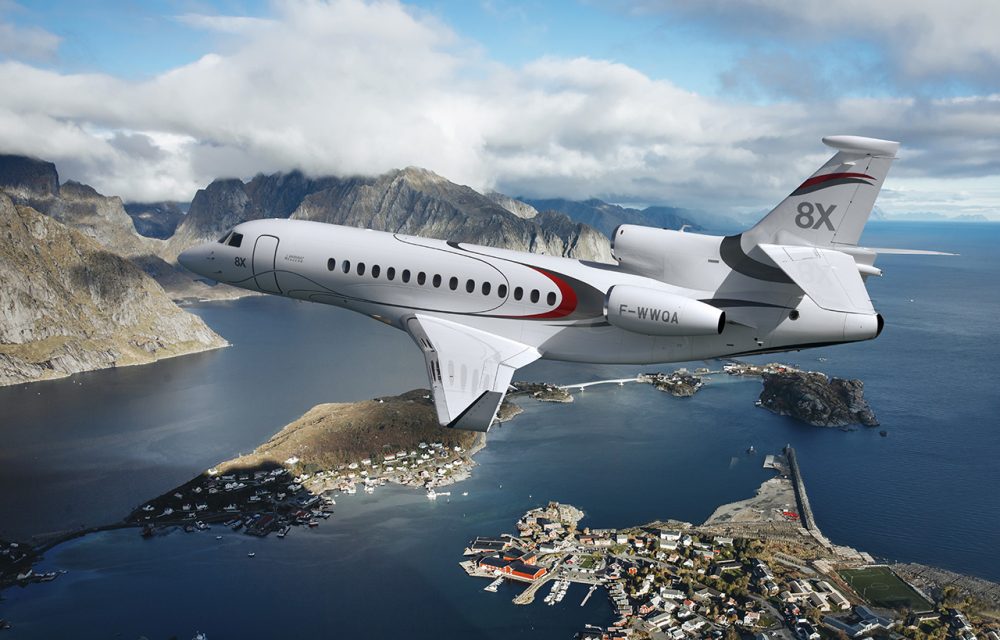 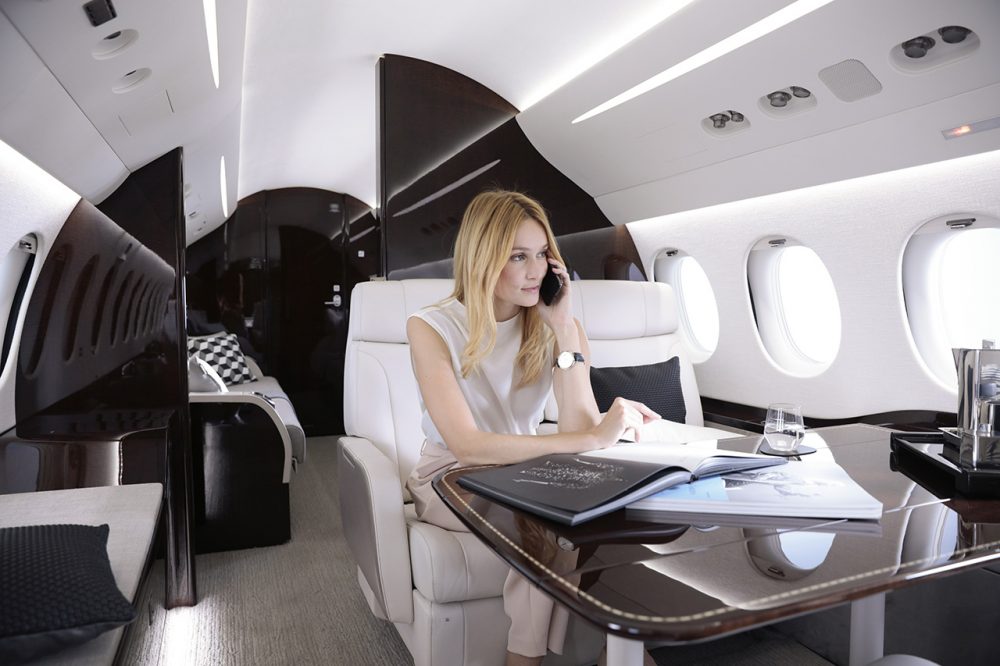 The cabin measures at 6 ft 2 in (1.88 m) high and 7 ft 8 in (2.34 m) wide and 42 ft 8 in (13 m) long, enabling it to offer customers the most diverse selection of cabin layouts on the market. More than 30 configurations are available with options such as three galley sizes, two with a crew-rest option, on offer. Operators have an extensive selection of passenger seating areas of varying lengths that can support different lavatory layouts, including a lavatory with shower. “The Falcon 8X will be the longest cabin of any Falcon.  But, more importantly, it will feature the highest level of customization of any large cabin business jet on the market,” said Trappier.

The 8X has also been qualified with new equipment and service options that yet further expand its flight capabilities. These include: 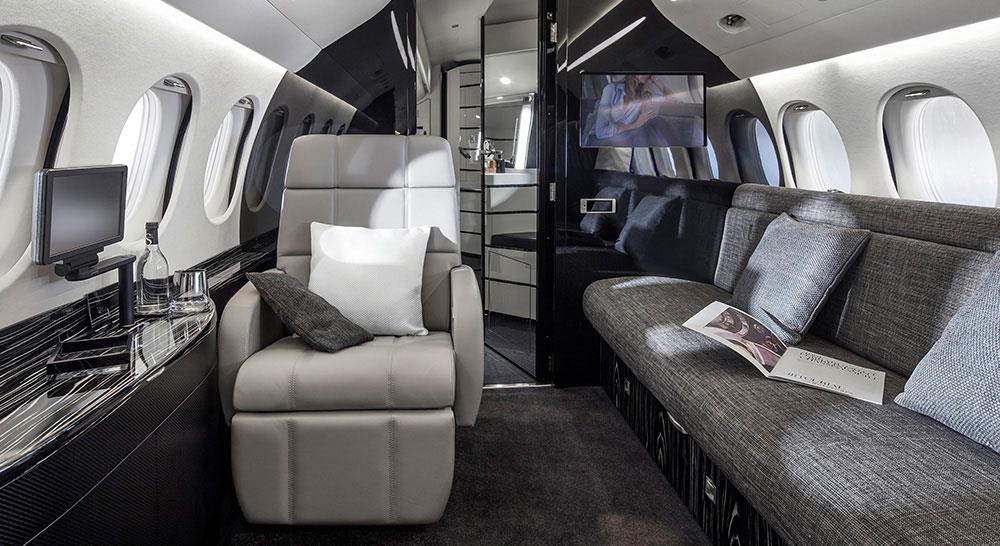 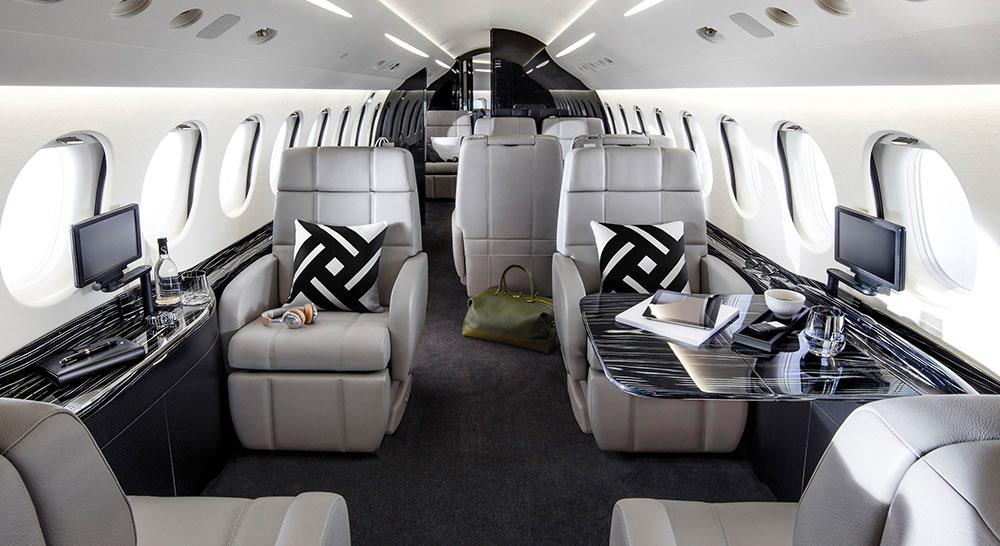 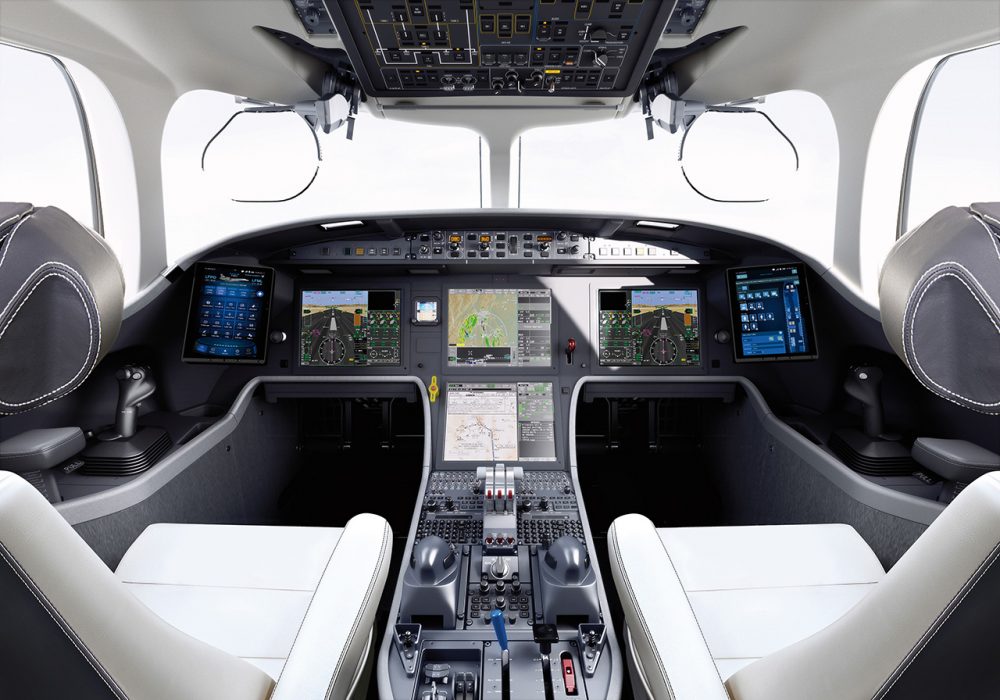 The FalconCabin HD+ cabin management system gives you control over your environment from anywhere in the cabin, using your Apple® devices and can also track the flight’s progress. There’s even an app that lets you call up a virtual moving map of any area around you by simply pointing your iPad® in its direction. As an option, you can also get Skybox™, the wireless media server with vast iTunes video and music capacity.

With its 6,450 nm range the Falcon 8X is able to perform an extensive list of one-leg missions such as Beijing to New York, Hong Kong to Seattle, Paris to Singapore and Sao Paulo to Moscow. Steep approach angles and strong climb-out gradients are no problem for the Falcon 8X, nor are hot and high conditions —and it delivers superior range from both. From London City’s 3,934 foot (1,200 m) runway, it can fly nonstop to Dubai or New York. Furthermore, departing Eagle, Colorado, an elevation above 6,500 ft (1,980 m), it can effortlessly fly nonstop to Geneva, Switzerland.

Royist is a leading boutique concierge offering luxury lifestyle management services to select members worldwide. Enjoy an unrivalled global 365/24/7 service.
View Editorial's profile
Brands Collection — Explore a curated selection of the finest aviation brands
View the collection
Aviation News
Aviation
Hill Helicopters redefines helicopter design with the new HX50
Built from the ground up and incorporating the latest structural, propulsion, navigation, and experiential technology, the HX50 is the helicopter redefined.
Aviation Z Featured
The Gulfstream G650ER sets the standard for performance in business aviation
Since 1958, when the Gulfstream I was introduced as the world’s first purpose-built business jet, Gulfstream has manufactured, serviced and supported more than 2,200 business aircraft.
Aviation Z Featured
The ACH160 is the most modern interpretation of the Airbus vision
Ultra-modern, fast and agile, with a stylistically demanding design and the highest possible levels of comfort. The quintessential ultimate helicopter.
Aviation Z Featured
Virgin Galactic unveils Mach 3 aircraft design for high speed travel
Pioneering human spaceflight for private individuals and researchers, as well as a manufacturer of advanced air and space vehicles, Virgin Galactic is becoming a prominent player in the space travel industry.
Aviation Z Featured
Pilatus PC-24, the world’s first super versatile jet crafted in Switzerland
The PC-24 is the only aircraft combining the cabin size of a midsize jet with the versatility of a turboprop and operating cost of a light jet.
Aviation Z Featured
Bombardier Global 8000, travel the world in peace and tranquility
The Global 8000 business jet offers industry-leading range and a cabin with three individual suites thoughtfully designed to maximize comfort and productivity.
Aviation Z Featured
Embraer Praetor 600, different by design, disruptive by choice
Embraer has punctuated aviation history with disruptive moments —anything is possible when you challenge the status quo.
Aviation Z Featured
MOBi-One: ASX’s electric vertical take off and landing tilt-wing (eVTOL)
Airspace Experience Technologies (ASX) is an aviation start-up re-imagining personal air transportation for everyone by offering eco-friendly, quiet, and connected eVTOL aircraft.
Aviation Z Featured
Embraer Pulse, the first-ever aerospace concept car
Fueled by challenges and guided by dreams, the last fifty years have been a true journey of wonder for Embraer.
Aviation
Learjet 75 Liberty, limitless freedom with space to work and relax
The new Learjet 75 Liberty redefines the iconic Learjet brand and features the segment’s first private Executive Suite.
Aviation
Airbus MAVERIC, improving environmental performance and passenger experience
Airbus reveals MAVERIC (Model Aircraft for Validation and Experimentation of Robust Innovative Controls)—its “blended wing body” scale model technological demonstrator.
Aviation Z Featured
Airbus collaborates with Aston Martin to roll out the ACH130 Aston Martin edition
The ACH130 Aston Martin Edition, the first offering from the recently-announced partnership between Aston Martin Lagonda and Airbus Corporate Helicopters, was recently revealed at Courchevel in the French Alps.
Discover our membership —  ™Request Invitation
We use cookies and similar technologies to give you the most relevant experience by remembering your preferences and repeat visits. By clicking “Accept”, you consent to the use of all cookies.
Cookie settingsACCEPT
Manage consent